We begin this week at the bottom end of a three week range in December Gold futures. Since Thursdays test of the early March high near $1800, we have settled back almost thirty dollars an ounce on Columbus Day in the Unites States. Bonds will be closed today, while equities and other markets will be trading on lighter volume.

After the United States reported Non-Farm Payrolls on Friday, the sentiment in the markets overall has been mixed. The number sent many futures contracts rallying to chart resistance Friday, only to run into profit taking shortly thereafter. It is clear that NFP takes a back seat to the continued worries in Europe.

Beginning today, European Finance Ministers meet in Luxembourg to discuss plans for Spain and Greece and also to hopefully discuss a way to accelerate banking cooperation. The European Stability Mechanism (ESM) begins today which allows Spain access to the ECB’s Balance Sheet, but there is a catch. Spain has not yet asked for a bailout, which is necessary first. It is widely expected that Spain’s decision will be delayed until after the European Council Meeting which concludes on October 19th. While this week’s meetings and announcements in Europe should have some impact on the markets, the purpose is to lay the groundwork for the ECM next week.

The United States begins their Q3 earnings season this week where consensus expects the first decline in eleven months. Reported earnings schedule is light, and impactful reports in the US will be on the lighter side as well. Focus will remain on Europe as we await news from this week’s meetings.

December Gold Futures targeted resistance late last week at nearly $1800 an ounce, but did not have enough buyers to drive prices above the March highs. A failure at $1800 prompted profit taking that continued until the low from two weeks ago was hit and buyers begin to nibble at support again.

If you reference the attached chart, there is a multi-year trendline shown that comes into the chart slightly below the lows from the last three weeks. I believe that this line will hold this week as support. I do not expect Europe to cause any major waves in the market this week, or at all before the Unites States Presidential election. My thought is that any announcements that are made from Europe will continue to be seen as supportive. Not only will this help keep the Euro stable, it will also allow the FED’s QE3 participation to keep hold of the market and keep Gold prices underpinned. If there is unexpected great news out of Europe this week, I would expect Gold to retest last week’s high, and likely trade through $1800 an ounce. If the news is again lukewarm, expect prices to stay in the same range we have been in for over two weeks. 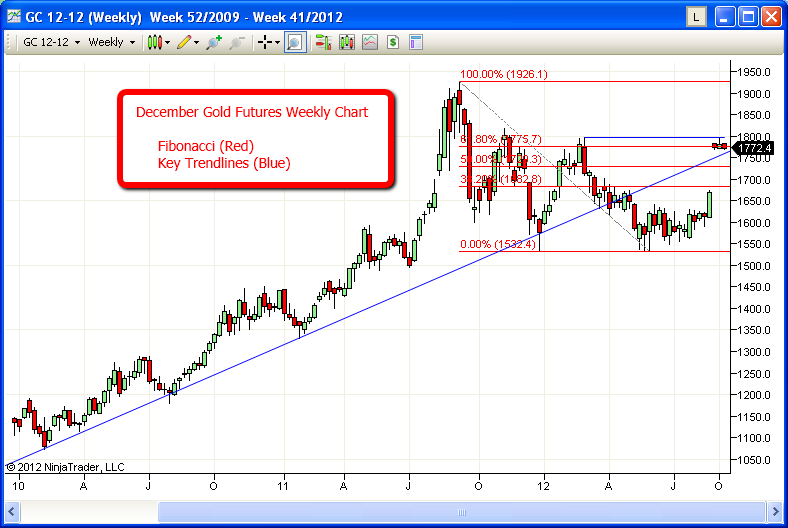 Good luck this week and as always, please feel free to call or email my office with any questions or comments regarding this piece. Also, please keep in mind that Long Leaf Trading is offering lowered commission rates on all new accounts opened in the month of October. This applies to all new accounts, whether Gold is the focus or not. Please contact Brian Booth directly by phone at (888) 272-6926 or by email at [email protected]

4 thoughts on “Gold Chart of the Week”