It seems to me as we are finally back to double digit temperatures here in the Mid-Atlantic there is a different feel in the market so far this year. As we ended 2013, stocks were buoyant and moving to new highs and as we move into the second week of trading in the new year, stocks seem to have lost some of their pizzazz. 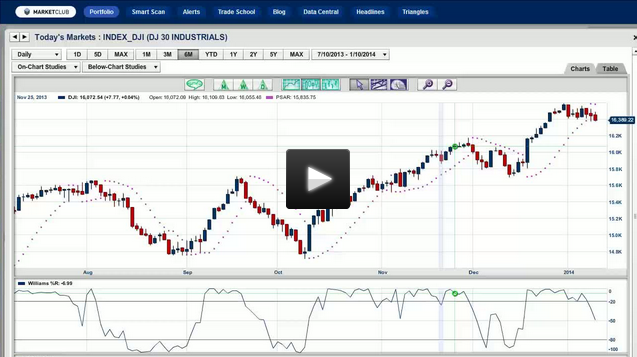 While the major indices are still in a positive upward trend longer-term, it is increasingly apparent that they may just be running out of gas and upside momentum in the short-term. I'll be examining the three major indices today and share with you my take on what's happening in each index.

A while back I did a special report on gold and today's action, while positive, still has not turned this market around to the upside. However, many of the clues that I look for are beginning to form which could indicate gold might have a pretty serious up-move in the not too distant future. I will be examining gold today in my video update.

Crude oil has fallen back to an area where it has previously found support. While the trend for crude oil is negative at the moment, there may be evidence that it has gone as far as it is going to go, at least in the short term. I'll be taking an in-depth look at crude oil in today's video report.

The dollar has made quite a remarkable comeback, however I am not totally convinced that the dollar has entered into a long-term bull trend. There is evidence that we are in a holding phase, waiting for the next shoe to drop.

A word of caution, we are still in thin holiday trading markets and will likely remain there until everyone returns from vacations and gets serious about trading the markets next week.

Every success in the market and have a great weekend,
Adam Hewison
President, INO.com
Co-Creator, MarketClub

One thought on “The Big Market Vortex”