Hello traders everywhere! Adam Hewison here, President of INO.com and co-creator of MarketClub, with your video update for Tuesday, the 11th of February.

What are they and why do they matter? Oftentimes bull and bear markets come to an end on a Tuesday, why is that? It all has to do with momentum. Typically a market builds up momentum over the weekend and that enthusiasm tends to carry over into Monday and early Tuesday trading. This is the same momentum rule I use for the "52-Week New Highs on a Friday" trading strategy. 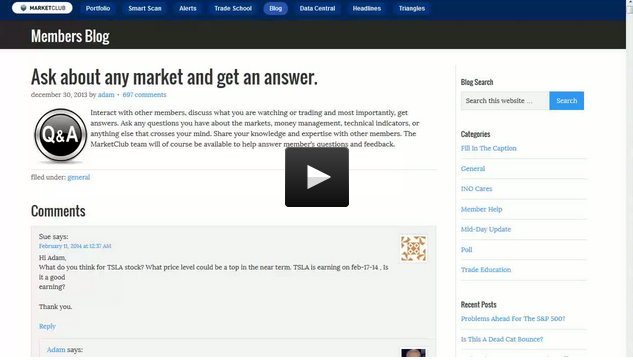 Rule #1: On a new 52-week high when the market closes at or close to its high on a Friday, buy and go home long for the weekend.

Rule #2: Exit long position on the opening the following Tuesday.

Rule #3: If the market opens lower on Monday, exit this position immediately.

Are the markets going to reverse their recent short covering rally and retest their lows again? Many professional traders give the market a half hour or even an hour to set its trading range for the day. Should the market move below the low of the first 30 or 60 minutes, then there's a pretty good chance that you're going to see an end to the recent upside momentum.

There's a lot going on in politics today with Ms. Janet Yellen testifying for the first time in her new position as Fed chairperson. By the time you read this report, her testimony may actually be over. I expect to see zero changes in Fed policy as they are committed to low interest rates and tapering in the immediate future. I also expect Ms. Yellen to say only good things about her predecessor, former chairman Ben Bernanke. This falls under the category of see no evil, say no evil about any former Fed chairman.

In today's report I will be looking at and analyzing the stock of Tesla (NASDAQ:TSLA). This is the exciting electric car company started by Elon Musk that is revolutionizing automobile markets around the world.

I will also be looking at gold prices (XAUUSDO) and the ETF (GLD). Both markets have moved to their best levels in 12 weeks. I will be analyzing both of these markets to see how far I think they can move from current levels.

Based on requests from MarketClub members, I will also be looking at Natural Gas (NG.H14.E) and the ETF (UNG), both of which have been volatile due to the extremely cold weather here in the United States.

To summarize, I would not be surprised to see a "Tricky Tuesday" reversal today as momentum and profit taking take hold of the markets.

One thought on “It's Tricky Tuesday, So Be Careful”