Today is the first day of spring and maybe this is the cause for the spring in the markets. March 20th also happens to be "International Happiness Day" and I'm sure that many investors have a smile on their face today with the way the markets are acting in Europe, Asia and the U.S. 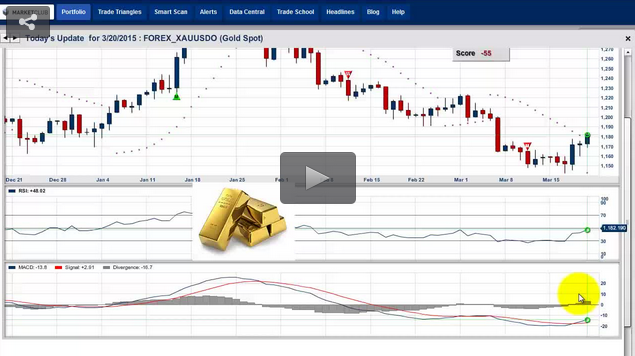 Today, I'll be looking at gold prices because they are acting and doing something that they haven't done in a long time and I want to share that with you in today's video. It is impossible to pinpoint what is causing gold to rally, whether it is short covering or the potential that Greece is going to implode any day now. Either way, it's not important what is causing the rally. The important thing to remember when trading is to get the direction right and not worry about what is causing the trend. I remember when I was in the trading pits in Chicago, I asked someone why the market was going up and he said to me, "It doesn't matter, it's going up". There is a lot of truth in that comment. That's one of the big takeaways in trading, don't over think markets.

As I write this commentary before the market opens, we could be seeing the equity markets close well towards the end of the day and possibly closing in new high ground on short equities before the weekend. The NASDAQ is very close to breaching the 5000 level, a close over that area today can be viewed as being very positive for the weekend.

Crude oil also appears to be finding some support at lower levels but has not yet reversed trend and turned around. I will be looking at that market to see where the key points are for a trend reversal to the upside. Remember markets can get very crowded on one side of the ledger when everybody believes that the trend will continue and go on forever. When that happens, a market tends to reverse and go the other way. The reason that happens is because markets are forward-looking trading instruments.

I will be getting into the recent Trade Triangle scan today to find new trades that may be just emerging. You won't want to miss that part of today's video.

This being Friday, I will of course, be looking for weekend trades using our "52-week highs on a Friday" strategy.

5 thoughts on “Is Gold Foretelling An Impending Greek Disaster?”