It was back on 13 April that I highlighted the breaking point for the dollar, which could lead to a dollar correction after a prolonged rally. What was that breaking point? If inflation gauges showed that the strong dollar weighed on the inflation outlook, then the dollar would begin its correction. And so indeed, shortly after, the dollar began to plunge against its European peer, the euro, as investors switched into euro longs and dollar shorts. The reason? Data suggested that the US economy wasn't growing as quickly as expected, and most inflation gauges suggested that inflation still wasn't returning.

And then, two weeks ago, the tide turned once again and investors began dollar buying once more as core inflation nudged up and the Eurozone, with the looming Greek crisis, seemed weak again. But is the dollar correction really over? Don't count on it…

While core inflation has indeed recovered to be closer to the Fed's comfort zone reading of %%, retail sales have grown by a mere 0% after a one-time recovery. But, more worryingly, producer prices are continuing to plunge at an alarming rate, with the latest PPI falling by -1% MoM. This means that producers are under pressure to lower their prices rather than increase them in the short term. With such internal pressure on inflation to fall lower, the chance of headline inflation returning to a normal pace any time soon is in doubt, especially taking into account the dismal GDP growth figures for Q1. There is no getting around it – potential rate hikes by the Fed seem more remote than before.

If you thought that the market is viewing the soft patch in the US economy as just a temporary glitch, you'd be wrong. In fact, since March, investors have pushed the expectation of US rate hikes even further down the road. As can be seen in the two respective yield curves of US treasuries, one from the 16th March and the other from yesterday, the yields are mostly lower on the short end. So, in fact, rate hikes were driven further away by at least six months. 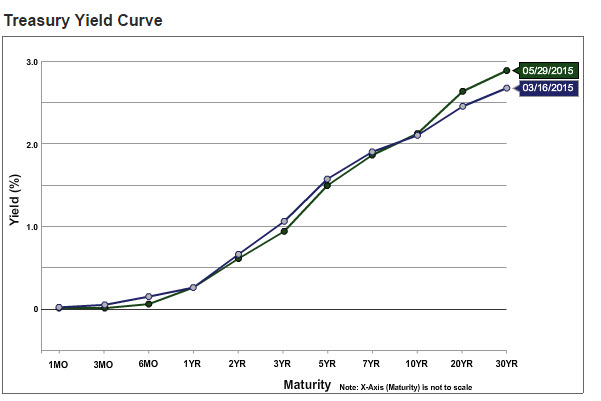 Chart courtesy of US Department of Treasury

At first, investors were targeting June as a possibility, and certainly September. Later on, as inflation data deteriorated and growth softened, investors switched to possibly September and certainly December. Now, as the probability chart extracted from CME interest rates futures suggests, investors are divided about December 2015 being the target month for the first rate hike, with a rate hike for December standing at a not-so-solid 60%. Which means even December is in question. 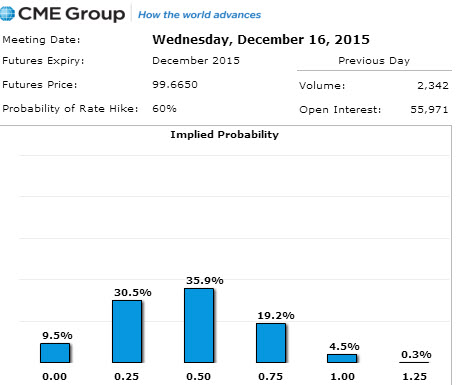 Of course, investors' expectations for the dollar may change in July if June's data proves to be more upbeat, especially in the producer inflation side. But as of now, investors have pushed their expectations for the first US rate hike further away. They have become more downbeat about the chances of the first rate hike by the Fed in nine years happening this year, and have returned to being deeply entrenched in dollar positions, especially against the euro.

Why? As you might have guessed, it's because of Greece. However, this also means that if the threat of an imminent Greek bankruptcy were removed, investors would return to short the dollar. The clock is ticking, though, and a Greek solution, even if only temporary, must happen this week, before Greece has to pay €300M to the IMF, according to its bailout terms. And it currently has no way to pay, because its treasury reserves are empty. Of course, if Greece goes bankrupt, all bets are off and investors will push the dollar even higher.

But what if the crisis is resolved? The dollar correction that has been on hold for the past few weeks could quickly resume. As illustrated in the EUVIX index, which measures implied volatility of the euro, euro volatility is at cyclical highs. This means that euro implied volatility could soon fall back, and just as when the VIX falls it's positive for the S&P 500, as the EUVIX falls it will signal that appetite for the euro is back and the dollar correction is no longer on hold. So before you plan to ride on a dollar rally once again, think twice, because the derivatives markets suggest that the dollar correction is not yet over.

2 thoughts on “Dollar Correction Not Over”