The biotechnology cohort has transformed into a secular growth sector witnessed by spectacular performance in the face of bull and bear markets as well as economic troubles domestically and abroad. The biotechnology sector has been on an unprecedented performance streak in both annual and cumulative performance over the past 10 years and accentuated during the latest 5-year timeframe. The biotechnology sector can be highly volatile, however I posit that this cohort has established itself as a secular growth sector and thus doesn't fit the mantra of high-risk high-reward based on annual and cumulative performance throughout any market condition. I content that long-term data support this secular viewpoint without the perceived inherent high-risk. Short sellers contend that the sector is overvalued and frothy while its multi-year run has resulted in a bubble imminent of bursting. Some commentators have recommended shorting the sector or relinquishing portfolio positions with exposure to the biotechnology sector altogether. In brief, I'll be using The iShares Nasdaq Biotechnology (IBB) as a proxy to substantiate this thesis. In brief, IBB holds 150 biotechnology firms listed on the Nasdaq with a minimum market capitalization of $200 million thus spanning small, mid and large-cap companies. Greater than ~30% of assets are devoted to small and mid-cap growth names while ~65% is devoted to large-cap growth names. These companies are involved in early clinical development at the forefront of innovation and research to drive the development and potential commercialization of drugs targeting a variety of diseases and unmet medical needs domestically and abroad.

• Using IBB as a proxy for the Biotechnology cohort, this sector doesn't fit the mantra of high-risk high-reward based on annual performance throughout bull and bear markets

• Over the past 10 years IBB has cumulative returns of over 425%, unparalleled by an any major index 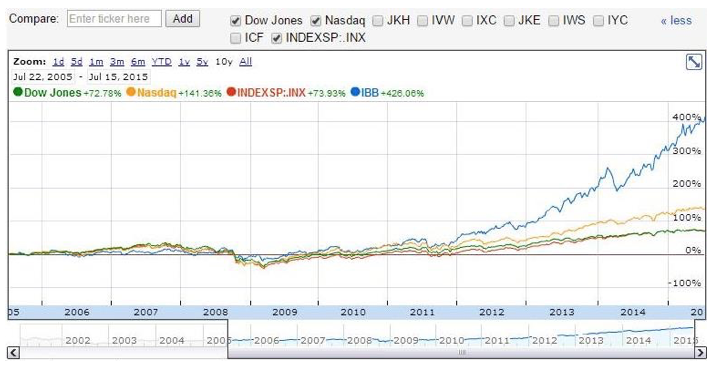 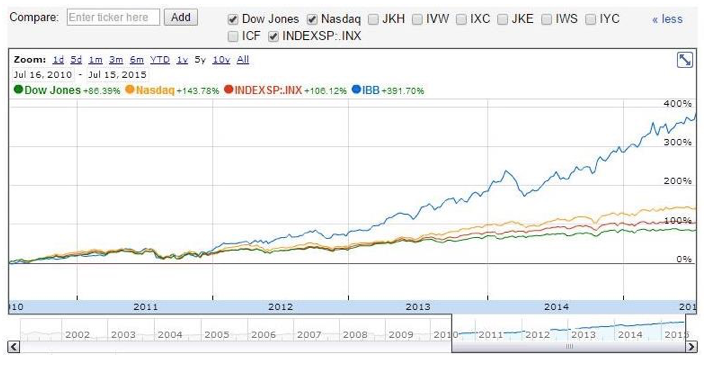 Biotech has outperformed during bear markets

Figure 3 – Google Finance comparison of IBB annual performance relative to the S&P 500, Nasdaq and Dow Jones during the market crash of 2008 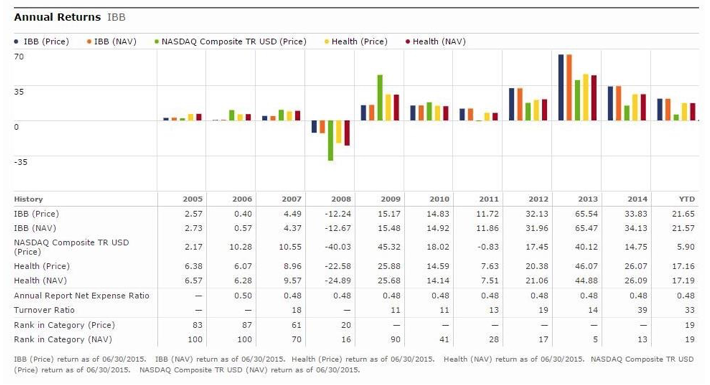 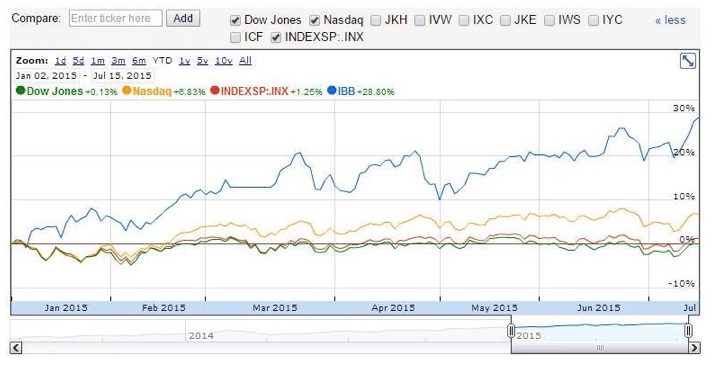 The merger and acquisition activity provides a growth catalyst

The biotechnology sector can be volatile and this can be attributable to multiple scenarios from drug approvals, drug failures, acquisitions, restructuring, divestitures, partnerships, patent lose, regulatory challenges, etc. There's intrinsic volatility within the sector since so much is contingent upon a common goal of obtaining drug approvals and a subsequent revenue stream to fund the future pipeline. In pursuit of this common goal and to evolve to changing market conditions, companies within the biotechnology sector commonly initiate partnerships and become acquisitive. The former item is of particular interest to investors, such that acquisitions can add value to shareholders in a meaningful manner. Acquisitions play a large part in volatility, some in the form of hostile takeover attempts such as Valeant (VRX) in the unsuccessful purchase of Allergan (AGN) to later be acquired by Actavis (ACT). AbbVie agreed to buy Pharmacyclics (PCYC) in a $21 billion deal. Companies with emerging and promising pipelines such as Receptos (RCPT) have been rumored as a potential acquisition target for some time. Earlier this week Celgene (CELG) agreed to acquire Receptos for $7.2 billion in cash or $232 per share. Teva (TEVA) has placed a $40 billion bid for Mylan (MYL) recently as well. Valeant acquired to buy the financially distressed immunotherapy company Dendreon (DNDN) in bankruptcy court for $495 million. These acquirers pay healthy premiums for potential pipelines and intellectual property. This consolidation bodes well for the entire sector whereby removing competition and combining or driving pipelines for future growth and innovation.

Exposure to the biotechnology sector

The companies that constitute the biotechnology cohort are at the forefront of innovation across many traditional therapeutic areas including oncology, virology and immunology as well as emerging therapeutic areas via immunotherapies and genomics-based therapies. The aggressive investment in research and development within the sector has paved way for many blockbuster approvals. Along with these approvals often times comes with lucrative rewards for shareholders. Due to the high-risk and difficulty of identifying one company in hopes that a clinical stage drug candidate comes to fruition, IBB offers exposure to the entire sector and mitigates that risk by default. This may serve as a viable alternative to those unwilling to take on a single company investment strategy while still maintaining portfolio exposure to this secular growth sector. Considering the long track record of innovative treatments and market performance, IBB may serve as a great companion holding for any long portfolio with a long-term time horizon to buffer any volatility within the biotechnology sector.

I posit that the biotechnology cohort has established itself as a secular growth sector and doesn't fit the mantra of high-risk high-reward based on annual performance throughout bull and bear markets. Year-to-date the biotech cohort, using IBB as a proxy, has once again defied the market returning over 28% and outpacing all major indices by greater than 20%. Data suggests, provided a long-term position that volatility within the biotech sector is negated by its long-term performance that is unparalleled by any major index. This sector provides high returns unrivaled by any major index with moderate risk (based on its resilience during the bear markets of 2008 and 2011 and thus far in 2015) and volatility. IBB may serve as a great companion holding for any long portfolio desiring exposure to the biotechnology sector with a long-term time horizon.

Disclosure: The author currently holds shares of IBB and is long IBB. The author has no business relationship with any companies mentioned in this article. He is not a professional financial advisor or tax professional. This article reflects his own opinions. This article is not intended to be a recommendation to buy or sell any stock or ETF mentioned. Kiedrowski is an individual investor who analyzes investment strategies and disseminates analyses. Kiedrowski encourages all investors to conduct their own research and due diligence prior to investing. Please feel free to comment and provide feedback, the author values all responses.