Investing in the market is a lot like anything else – if it seems too good to be true, it probably is. Then again, sometimes a stock play makes so much sense, it's impossible to ignore.

The current economic environment has investors concerned what 2016 will bring. China's stock bubble burst, commodities are suffering in the dredges with no positive catalysts anytime soon and the US stock market is looking more and more like it's hit the top and could be reversing course sometime over the next six months or so. And the Fed rate hike still looms large as investors prepare to get defensive against a rising rate environment that could last several quarters.

After more than five years of economic expansion, consumer spending is at all time high levels, although further growth has been mixed over the past few months – another sign of a market top. Margin debt levels hit a record high this year as well meaning consumers and investors both are leveraged more than ever financially.

When interest rates go up, that debt interest will rise as well hurting discretionary income but lining the pockets of lending companies. And it's in this economic quagmire that we find a company ideally suited for these changes.

An American staple in the right industry at the right time

Visa Inc. (NYSE:V) is a massive $191 billion credit services empire that spans more than 200 countries around the world. The company made a global splash this week with its announcement that it's looking at buying Visa Europe for $23.4 billion which would expand its operations making the world's largest payment processing company even larger. 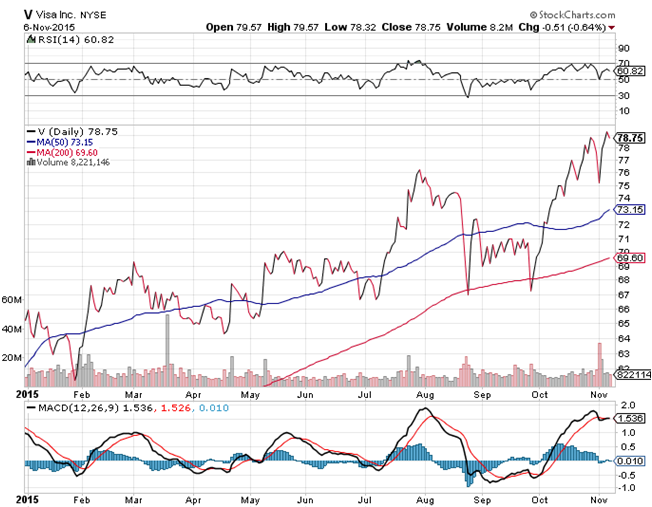 Notice the steadily increasing 50-day and 200-day moving averages and how the stock price has skyrocketed past both in the last month – a strong sign that the stock has building momentum behind it. It's further bolstered by the MACD showing very strong bullish figures while the RDI is still under 70 suggesting that the stock isn't overpriced yet either.

From a valuation standpoint, Visa trades pretty much in line with its peers for P/E as well as growth, but the industry overall looks strong with a long-term EPS growth rate of more than 20%. The company missed earnings last quarter – its first miss in more than 15 quarters – but that hasn't stopped the stock from moving higher.

Visa's balance sheet is another strong positive catalyst. The company carries no long-term debt obligations while total current assets are almost equal total liabilities giving Visa plenty of room to maneuver in any kind of economic climate while also giving them the ability to make large acquisitions such as the buyout of Visa Europe.

The upcoming interest rate hike could be the biggest positive catalyst going forward. With more than 88 billion credit transactions in the past year alone, even a slight increase in rates could translate into big gains for the company.

Estimating full year earnings and a fair value P/E, this stock should be trading at around $90 per share – a potential 14% pop.