Investors in the Turkish Lira got a whiff of optimism recently following the AKP party’s landslide victory. What’s the reason for the optimism you might ask? It’s that Turkish President Recep Tayyip Erdoğan would now have a stronger hold at the helm. That means the AKP party could conceivably push through much-needed reforms. But the fact is that’s really just wishful thinking. Any strength in the Turkish Lira should be used for selling not buying.

Usually, I like to leave the FX charts for dessert, yet sometimes a quick glimpse can better deliver my point. Looking at the chart it becomes clear that the path towards a higher USD/TRY hasn’t budged a bit. Any inkling of optimism was overwhelmed by pessimists looking to get out of the Turkish Lira. So much so in fact that most of the Lira’s gains have already been lost.

Why are short sellers still dominant if reforms are coming? Because even much-needed reforms would take years before they’d have any impact. Meanwhile, the problems for Turkey and the Turkish Lira are imminent. 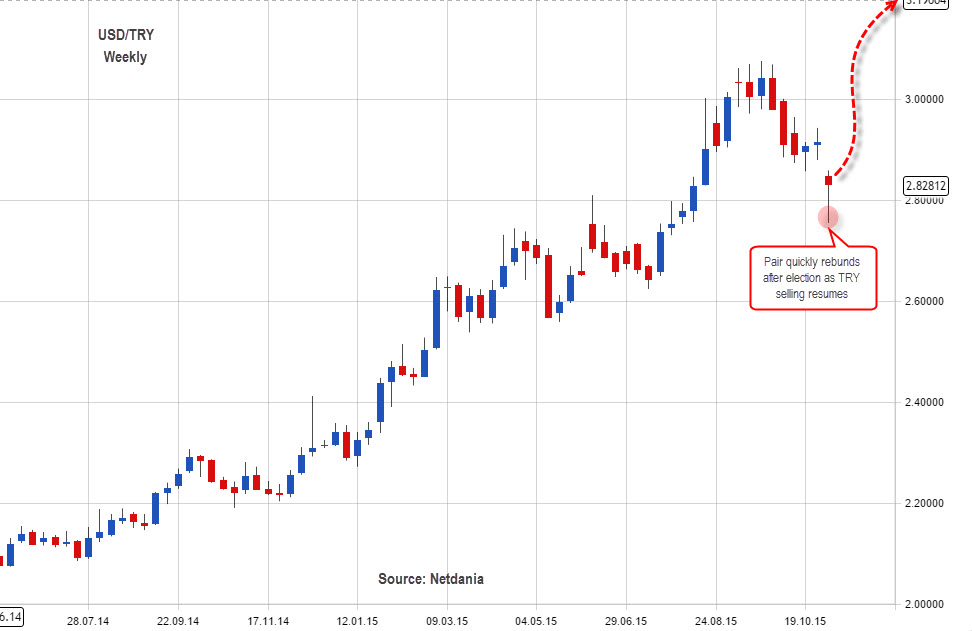 The Force behind the Lira’s Plunge

So what is the driving force behind the Turkish Lira’s weakness? Naturally, there are political tensions within Turkey and geopolitical tensions outside its borders. However, to some extent, that could have been muted if the Turkish economy was resilient. But Turkey’s economy is anything but. Simply put, it is fragile and weak.

Turkey is a classic developing economy in the sense that it is dependent on cheap labor. In theory, a cheap labor force makes goods cheap for export. Thus, a developing economy should be able to compete with other exporters. However, Turkey, despite cheap labor, remains uncompetitive. For more than a decade, Turkey has been posting trade deficits. Compare Turkey to China, which also has cheap labor. China has posted decades of trade surplices and accumulated reserves.

Over the years, Turkey’s exports haven’t been robust enough, and the trade deficit widened. As a result, the Turkish government has accumulated $400 billion in debt to foreign creditors. With insufficient export revenue, Turkey becomes dependent on external funding for survival. And now, with investors’ appetite for emerging market debt in question, that could spell default for the Turkish government.
Is there a way out of this situation? There is one. The Turkish Lira must be allowed to weaken to the extent that exports are cheap enough to be competitive. Eventually, exports could grow enough for Turkey to post a trading surplus. Only then will external debt levels fall.

Is the Turkish Lira’s Decline Unstoppable?

From the chart above we can see that indeed, Turkey’s trade balance has improved, and the trade deficit narrowed. The problem? The Turkish Lira has depreciated more than 80% in less than five years. And still, even after a narrower trade deficit, there’s a trade deficit of $4 billion each month. On an annual basis, that’s roughly 6% of Turkey’s GDP.

There is some evidence that a weaker Turkish Lira is helping Turkish exports. However, the fairly significant trade deficit means that the Turkish Central Bank must allow the Turkish Lira to weaken further. Thus, a strong case can be made for a much weaker Lira, even by today’s standards.

The question is what if the Turkish Central Bank decides to curb inflation (now at 7.58%). To do that it would have to stop allowing the Lira to weaken. In that case, Turkey’s trade deficit will continue to be high and external debt will continue to grow. Then worried investors will sell even more Turkish bonds which will, paradoxically, weaken the Lira.