Hello MarketClub members everywhere, today I'm going to be looking at some key levels in the markets. If these levels are breached, it would indicate a further correction to the recent rallies. For the past 4 to 5 weeks the equity markets have been moving steadily higher and are now extremely overbought. That condition alone does not necessarily translate to the markets correcting, however, 85% of all stock market newsletters are bullish on equities. History has taught us that when there is a large consensus of people thinking the same way the reverse occurs as there is no one left to buy. The markets could well be at a consensus crossroads right now. 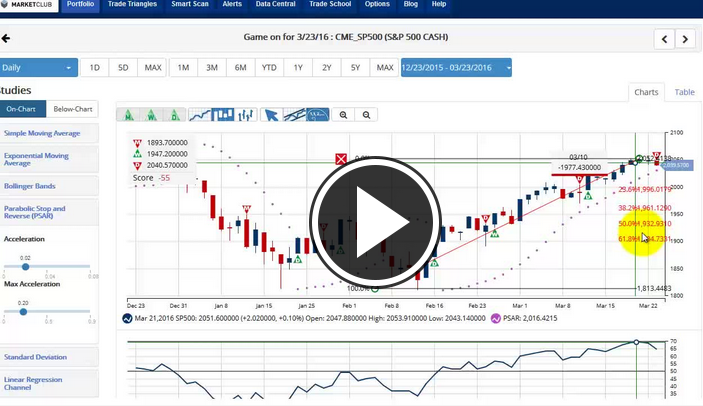 Here are some of the levels that I'm looking at to get an early indication that a correction could come into play.

Last Friday the DOW (INDEX:DJI) closed at 17,602 and as I write this, the Dow is lower for the week and potentially could be putting in a weekly reversal. The two levels that I'm watching closely are 17,481.49 and 17,328.69; the latter represents a parabolic level. Should both of those levels be broken, I would expect to see further downside action. It remains locked in a broad trading range.

As I outlined in yesterday's post, this index has been the weakest of the three indices. The NASDAQ (NASDAQ:COMP) just reached its 61.8% Fibonacci retracement in the last couple days, normally a 61.8% retracement level is a natural resistance area. The key levels to watch for this index are the 4772.41 level which is a three day low, and 4678.87 which represents an area if broken would turn the PSAR negative. It remains locked in a broad trading range.

Gold (FOREX:XAUUSDO) moved to the sidelines on March 21st and avoided today's sharp drop. The key level I'm watching today is $1215.85. Should this level be broken, it would move gold into an intermediate negative position. Some time back I talked about a cyclical low coming in the April/May period. Previous recent lows for gold have occurred on March 12, 2015, August 3, 2015 and Dec 2, 2015. Moving that 4 to 5-month cycle forward brings us to a possible low period sometime in April or possibly May. As always I will rely on Trade Triangles to confirm a low and get me back in the market.

Yesterday, I mentioned a small negative divergence in the RSI indicator, indicating that crude oil (NYMEX:CL.K16.E) may have topped out for the moment. Here are some key levels to watch. The first level is $40.41, which represents a three day low, the next level is $38.49 which represents an area if broken would turn the PSAR negative. If either of these levels are broken to the downside, it would indicate further defensive trading action.