Hello MarketClub members everywhere. I think we can all agree that this year's presidential election is something we have never seen before. It doesn't matter if you're a Republican, Democrat or an independent in the days leading up to the final vote, be prepared for the unexpected. That is why I say September is going to be unlike any other September. 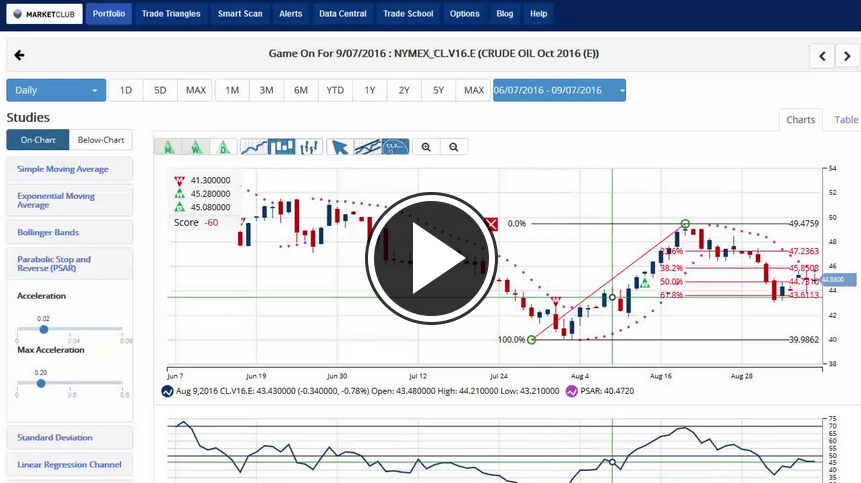 Coming back from Labor Day the index markets bounced back and resumed their upward trend based on the long-term monthly Trade Triangles. Sometimes as traders we get caught up in the minutia of trading and fail to see the bigger picture. I'm waiting for the index markets to accelerate on the upside. This may not happen, as the weekly Trade Triangles are red indicating a sidelines position in all of the indexes. This will likely will change in the very near future.

Gold (FOREX:XAUUSDO) put in a strong performance yesterday closing at its best levels in 16 days. The one fly in the ointment at the moment is the fact that the weekly Trade Triangles are red for gold indicating that the trend is down while the daily Trade Triangles are positive indicating the very short term trend is up. When this happens, it's indicating a sidelines position. Many people confuse the sidelines with not having a position. I tend to look at a sideline position as having a cash position and waiting for the right opportunity to come along.

Keep a close eye on crude oil (NYMEX:CL.V16.E) today as both the daily and weekly Trade Triangles are positive, and it has completed a 61.8% Fibonacci retracement. A move today in the October contract over $45.64 will trigger the parabolic indicator and more than likely push crude oil over the 50 line on the RSI. Should this happen, I would expect to see further upside momentum.