The year 2017 is just around the corner and it seems that more troubles are brewing for the Eurozone. The region faces a deadly combination of a premature ECB taper, Fed tightening and more political uncertainty. Together, those factors could disrupt the already fragile Eurozone recovery.

Mario Draghi, the ECB President, so far has proved (and more than once) his ability to stabilize the Eurozone economy and delicately navigate monetary policy. But, in the latest ECB rate decision, which was also the last for 2016, Mario Draghi may have slipped up and acted a bit too hastily. Draghi declared that the ECB would reduce its monthly bond purchases from the current pace of €80 billion a month to €60 billion, beginning in April 2017. Despite constant denials from the ECB, there is simply no other way to interpret Draghi’s declaration but as a tapering of the ECB’s Quantitative Easing program. And, in the world of monetary policy, especially ultra-loose monetary policy, less stimulus equals tightening.

The ECB is effectively rolling back part of the brakes it has used to curb volatility in the Eurozone debt market. When the Greek crisis loomed, the ECB used QE to curb volatility. Likewise, when the Spanish banking crisis erupted and, as of late, with Brexit and the Italian banking crises, the ECB quickly responded. The ECB’s massive QE program helped restrain the shocks to the system.

As we are hurtling towards 2017, the ECB faces the same types of political and economic uncertainty that require such stabilizers. In Italy, the banking sector is weighed down by toxic loans; moreover, voters chose against reforming their electorate system and in favor of keeping their red tape bureaucracy. In Germany and France, the two biggest economies in the region, national elections are looming, with Euro-skeptics gaining more and more momentum. That could jeopardize the existence of the Eurozone in the long run. In the short term, it could paralyze any attempt to further aid the banking systems of Italy, Spain and other countries in the Eurozone periphery that still needs recapitalization of its banking system.

All those shocks are expected to accelerate as the Fed moves forward with its tightening plans. If the Fed does indeed proceed with its plan to raise rates three times in 2017, bonds across the world will come under pressure.

As illustrated below, from August 2016, yields on government bonds from Italy, Spain and Portugal started surging. Although this is more or less in tandem with the trend in bond markets in the rest of the world, for the Eurozone, this is a negative development. Because higher bond yields eventually tighten credit. Such a development would be welcome in a growing economy, such as the US with 3.5% of annualized GDP growth and a core inflation of 2.1%. But, in the Eurozone, where the banking system is weak and undercapitalized, and with core inflation at 0.8%, that is a very negative development.

As I have mentioned in the past, one important indicator of the health of the credit system is the M3 level. If the M3 level is growing steadily it means the monetary base is growing and, therefore, credit has the potential to continue to expand. In the Eurozone, M3 levels have been stagnant for a while thus signaling that the Eurozone banking system is still weak. If the Fed tightens, not just once but three times as promised, bond yields in the Eurozone will rise further and credit in the Eurozone will turn even tighter. Then, the Eurozone banking system will come under more pressure, inflation could cool and consumption could slow. And, now that the ECB is not supporting the market, bond yields could rise more than before and then the pressure on the banking system will become even stronger. 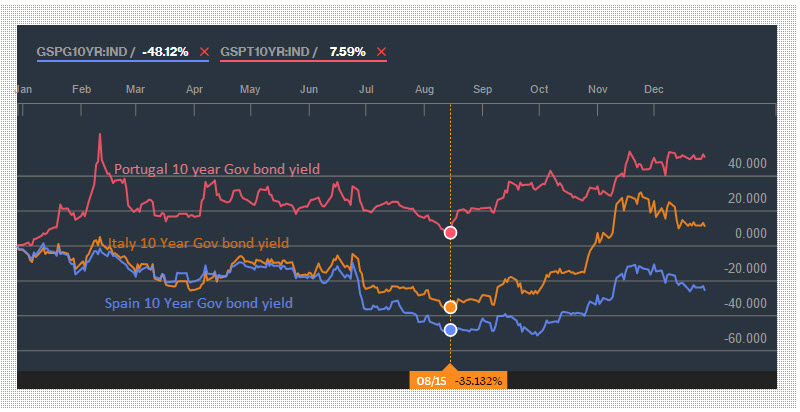 Where Does That Leave The Euro?

In the near term, the Euro might get some short-term respite, but that is mainly due to profit taking after a 9.1% depreciation over the past six months. But as Q1 of 2017 progresses, if indeed the US economy continues to demonstrate strength (as it is likely to do), then it is likely that we will get another rate hike from the Fed. This will ignite volatility in Eurozone bonds, mainly Italy, Portugal and Spain. The Euro trade, which as the chart below demonstrates is already turning more volatile, is likely to respond with higher volatility and could potentially proceed to hit parity with the dollar as the year progresses. It is not that far-fetched to expect that the ECB could backstop and eventually decide to add more liquidity. And perhaps, then, we could see a more significant Euro rebound.