Those who hope tell themselves - one day the tide will turn. I think a lot of people are either long or they’re not and were waiting for the rise of the top metals. Below are fresh charts which could help us to understand where we are and when the tide will turn higher.

I’ve written quite a lot in my previous posts about the tricky nature of corrective structures which have unpredictable outcomes. But the more time we spend inside of it, the higher are the chances that the situation becomes clearer.

Gold is in a consolidation from July, and it’s lasted for almost 5 months already. We had a boring time within the $1305-1367 range till the start of October when the sudden drop to the $1241 level broke the simple structure of correction. Another leg up to the former downside of the range at the $1305 level was deemed to be a long-awaited reversal, but gold failed there and fell back quickly to lower levels. Then the sharp move of the price changed to rapid short zigzags within the small narrow blue downtrend. Such a chart formation appears at the end of the move and therefore we should watch closely if the price would break up the upside of that blue downtrend above the $1187. It would give the first upside signal of a reversal in the market.

Are there the necessary prerequisites, which could add to the specific chart formation (blue channel) for reversal? I think we have several. Let’s start from RSI; it is oversold, and we have a higher low on it compared to the lower low on the price chart, which means divergence. It should play upside sooner than later to comply with the indicator. The next is the depth of consolidation – it reached the deep enough 61.8% Fibonacci level at the $1172 mark. And the last one is the composition of the structure. As I showed in the Chart 2, of an earlier post the CD (ii) segment could hit between the $1167 and $1148 marks (1.272-1.414 times of AB segment). So the price hit right inside of that range at the $1160 level.

The next significant resistance is located at the $1305 level – the former downside of the previous range. The price tested it both from the upside and from the downside, and it proved to be quite strong. The price should break and close above it to confirm the reversal. The minor barrier could appear at the $1240-1250 levels where the June and October lows were recorded. Below $1140 there will be an invalidation of this setup. 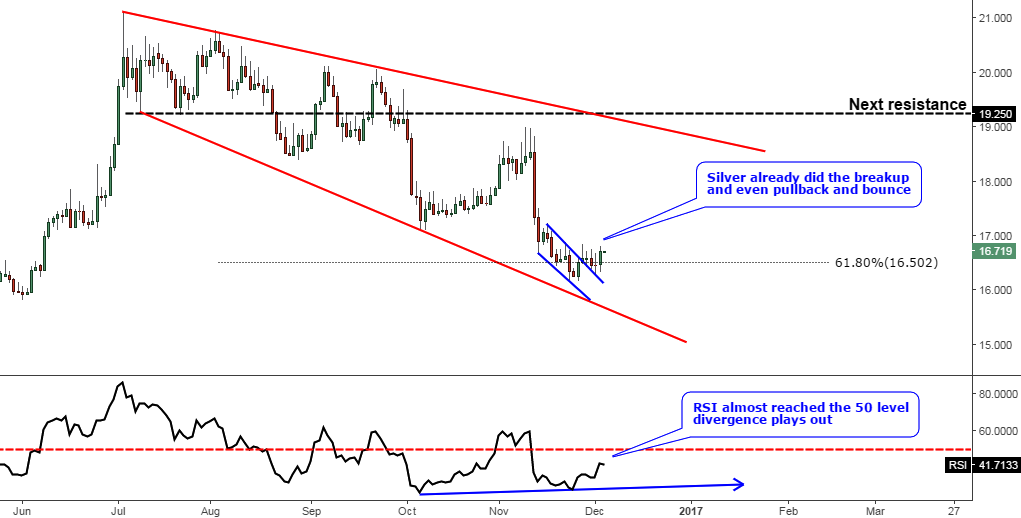 Silver is one of the champions of this year, and it is also beating gold within the ratio. Besides that, it has a very neat chart structure as the notorious consolidation is still contained within the red expanding downtrend. To compare, you can look at the Chart 1 above where gold has abrupt structure, which broke below the downtrend last month.

In the silver chart, we can see which factors helped the metal to be the first to start the reversal. The RSI is at a higher level compared to gold (42 vs. 28) and it almost reached the important 50 level playing out the accumulated divergence with the price. The consolidation reached the important 61.8% Fibonacci retracement level. And the price almost touched the downside of the red expanding downtrend.

The breakup appeared on the 28th of November. Then we can see a pullback to the broken trendline and now the price is moving north to break above the previous high at $16.86 set at the breakup. The next important resistance is seen only at the $19.25 mark where the downside of the first leg of correction is located. We also have the upside of the red expanding downtrend here. Below $15.5 there will be an invalidation of this setup.

11 thoughts on “Gold & Silver: Silver Is The First Up”