Cannabis is a proven treatment for cancer patients struggling with the side effects of chemotherapy such as nausea and loss of appetite.

But now, pre clinical research is showing that cannabis could actually be a cancer killer.

A group of scientists recently reported that THC and CBD slowed the growth and even killed certain cancer cells – including breast, brain and liver cancer – when grown in a lab.

Animal studies also suggest that cannabis could be a cancer killer.

A study conducted by Complutense University, one of the oldest and largest universities in Europe located in Madrid, showed that an injection of a synthetic THC eliminated malignant brain tumors in 1/3 of the rats studied while extending the life of another 1/3.

This ground breaking cannabis research has already gotten the attention of the National Cancer Institute – the U.S. agency responsible for educating Americans about cancer and cancer research.

To get the latest analysis as soon as it is released, please subscribe to our free weekly newsletter.

NCI’s website provides an overview of cannabis, cannabinoids and their impact on the human body.

“Cannabis has been shown to kill cancer cells in the laboratory.”

This new cannabis research could the beginning of a new breakthrough in the fight against cancer. And a new opportunity for cannabis investors.

Today, I want to share a young cannabis biotech in position to profit from this research with a promising pipeline of cannabis drugs for cancer patients.

Tetra has a market cap of $90 million, making it quite a bit smaller than some other well-known cannabis biotechs such as GW Pharmaceutical (NYSE:GWPH) with a $2.75 billion market cap and Cara Therapeutics (NASDAQ:CARA) with a $492 million market cap.

Pharmaceuticals means drugs for diseases. Health products are things like cannabis and CBD lotions and oils.

On the pharmaceuticals side, Tetra has five cannabis prospects in various stages of the clinical testing process. From that group two are specifically targeting cancer.

The prospect furthest along in clinical trials is candidate PPPOOO1.

This candidate would be the first smokable medication for advanced cancer pain. It recently completed its Phase 2 testing and is preparing to launch Phase 3 clinical trials. Tetra estimates this is a 4 million person market in the US with a market value of $5 billion annually.

In order to cash in on this huge market, Tetra has partnered with a powerful ally.

Aphria is the second largest Canadian cannabis company. In April Tetra announced a partnership with Aprhia, where Aphria will supply Tetra with dried cannabis. This venture began this summer.

This is a cannabis prospect for patients suffering nausea and vomiting from chemotherapy.

The thing that makes this prospect unique is that it replaces the currently approved synthetic THC.

Synthetic THC has been controversial because of its side effects. This prospect could potentially offer a significant reduction in those side effects.

Tetra believes this U.S. market is worth $5 billion per year.

Tetra is also developing a portfolio of health products. These products are designed to treat minor ailments like aches and pains and improve overall quality of living.

Tetra is Not Producing any Revenue But Looks Well Capitalized

It’s important to understand how early stage Tetra is. The company is in the very early stages of commercializing its technology and generated little revenue in the last 12 months.

However, this revenue situation is totally normal for a young biotech developing new drugs and medicine. They invest a lot of cash up front to develop new drugs in the hope that drug will eventually be commercialized.

For the time being, Tetra will rely on cash from investors to fund operations.

From that perspective, Tera looks well funded and capitalized.

In its most recent quarterly results, Tetra reported a net loss of about $1.1 million. In the meantime, Tetra’s cash position also more than doubled from last year, jumping to over $3 million from $1.2 million in the same period last year.

This growing cash position is good news. Despite the big ramp in R&D spending, Tetra was able to add more cash than it spent. This is a good signal moving forward. It tells me that Tetra should also have access to additional funding through capital markets based on investor interest.

Tetra has been volatile but overall strong in 2017. Shares were up more than 300% early in the year when the cannabis sector was rallying. After a pullback and recent rebound, shares are now up 207% on the year. Take a look below. 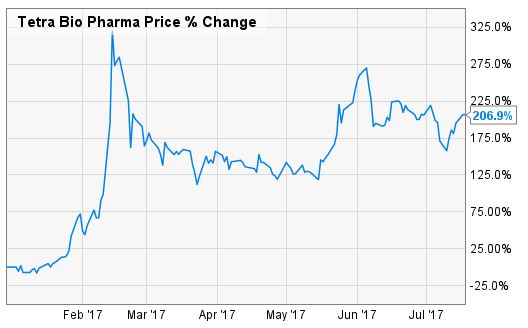 The Big Picture on Tetra Bio

Tetra is an early stage cannabis biotech with a specialty in cannabis medications for cancer patients. The company doesn’t generate any revenue for now but has a promising pipeline of prospects.

This is a high risk, high reward investment. Any good news from its clinical trials should be good for shares.