Leveraging options to supplement portfolio returns can make a meaningful impact on overall returns, especially over the long-term. Here, I’ll focus on covered puts, covered in the sense that one is backing his option contract with cash on hand. This strategy generates income in the form of a premium that’s received by the option seller. A topic that’s rarely covered is the different objectives or strategies and what to do about shares that are assigned from a covered put contract. Here, I’ll focus on covered puts and discuss the strategy involved before selling a put contract, objectives when engaging in these put options and if/when shares from the contract are assigned.

1. Initiate a position: Initiate a position in a stock at a lower price in the future than the stock currently trades today via receiving a premium which will reduce the effective purchase price to below the current market value.

2. Income: Identify stocks that have corrected and sell a covered put to receive a premium with the anticipation of the stock appreciating near the agreed upon contract price to capture the premium income and exit the contact. Thus no shares purchased and gains via premium income are realized. The earmarked cash plus the premium income can now be repurposed for subsequent trades.

3. Lower Cost Basis: Adding to an existing position via a covered put contract – when a long position corrects, one can add to his position to lower the cost basis with the intent of being assigned shares at a lower effective price than they currently trade when factoring in the premium income. Essentially locking in this downward movement and being assigned shares to lower one’s cost basis when combined with a pre-existing position.

Covered puts involve leveraging a cash position that one currently has on hand and collecting a premium in exchange for the obligation to purchase one’s shares at an agreed upon price before an agreed upon date. If the stock falls below the agreed upon price before the agreed upon date, then the individual that bought the contract from you will force the obligation (that you agreed to) for you to purchase the shares. In this case (when the stock falls throughout the contract lifespan), the shares can be sold to you (the put option seller) at a higher price than the market. However, if the shares rise in value then the shares will remain with the owner and the put option seller will keep the premium income and the cash earmarked for the potential purchase of the shares will be freed. Why exercise the contract and sell the shares to you (option seller) at a lower price when one can sell the shares on the open market at a higher price?

I typically select high quality, large-cap household names when engaging in selling covered puts. I identify companies that have sold-off in a meaningful way due to extraneous circumstances or a marginal miss in an earnings report. These companies are ones that typically pay dividends, engage in share buybacks, acquisitive mindset and still growing revenues. Examples of these opportunities include but are not limited to Starbucks (SBUX), Disney (DIS), CVS Health (CVS), Apple (AAPL), Bristol-Myers Squibb (BMY), Nike (NKE) and Target (TGT) to name a few companies that have witnessed massive sell-offs while the underlying business model remains fundamentally intact. Inevitably, these stocks appreciate to pre sell-off levels usually within a short period of time.

When a stock of interest enters one’s radar at the price range, he was looking purchase shares, instead of outright purchasing the shares he can enter the position via a covered put. Again, using cash on hand, he can sell a covered put contract by agreeing to buy the shares at an agreed upon price by an agreed upon date while being paid to do so.
Example: Stock of interest trades at $50.00 per share

Scenario B: Sell a covered put contract with an expiration of a month from now and agree to buy the shares at $55.00 while receiving $5.75 per share in premium income for an effective purchase price of $49.25.

The outcome from scenario B would allow the option seller to receive $575 in up front income (options are only sold in blocks of 100 shares) that can never be relinquished. Here, the option seller will decrease his effective purchase price by $0.75 per share relative to purchasing the shares outright. In this case, if the shares fall a bit further from the already corrected stock then you’ll purchase at a lower effective share price. 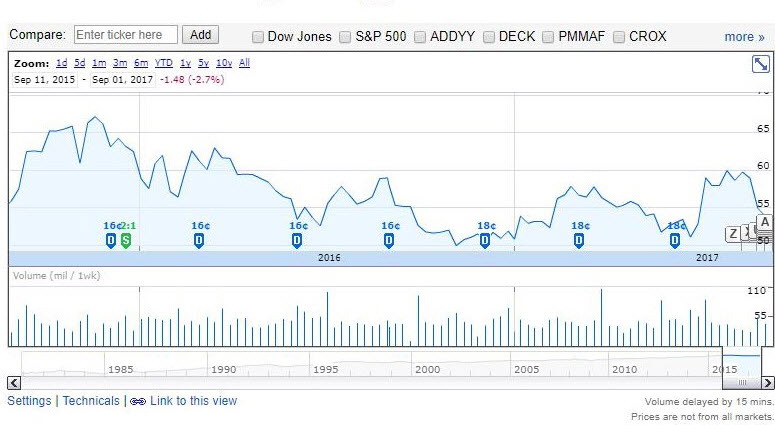 Empirical example: In October of 2016, I had sold a covered put on Nike (NKE) when the shares were trading at $51.80. I agreed to buy the shares at $60.00 about three months in the future while receiving $8.40 per share in premium income to render my effective purchase price of $51.60. I wanted to lock-in this sold-off price while providing myself the flexibility of possibly capturing the premium income if the shares were to bounce within the contract lifespan. The shares had sold off from $68 to roughly $52 or 23% at the time of the trade, and I was looking to initiate a position in Nike.

The shares were assigned at an effective price of $51.60 per share, and my position was initiated near a 52-week low in a stock that had already corrected. Inevitably, Nike returned to form and broke out to the $60 level. This provides the put option seller optionality here, the shares were assigned, but the shares appreciated to a level to where one could sell these shares to lock-in a nice gain of 16%.

When a stock of interest has corrected, and the fundamentals remain intact, the likelihood of the stock rebounding remains high over the near-term. Again, sticking to high-quality household names one can sell a covered put contract and agree to buy the shares at a higher price than they currently trade on the open market at a future date while being paid a premium to take on this obligation. As the option put seller, one is anticipating that the share will rise over the length of contract lifespan to allow the premium income to be realized without being assigned shares.

One can sell a covered put option and agree to buy the shares at $55.00 a month from now with the anticipation of the shares rebounding back to this level within this timeframe. The put option seller will be paid a premium of ~$5.50 per share or $550 in cash. As the shares approach the $55 level, the contract that was initially worth $5.50 per share will decrease to ultimately $0 when the contract expires. Thus, the option seller will either close the contact for a marginal cost or let the contract expire and capture the vast majority of the $550 in premium received. 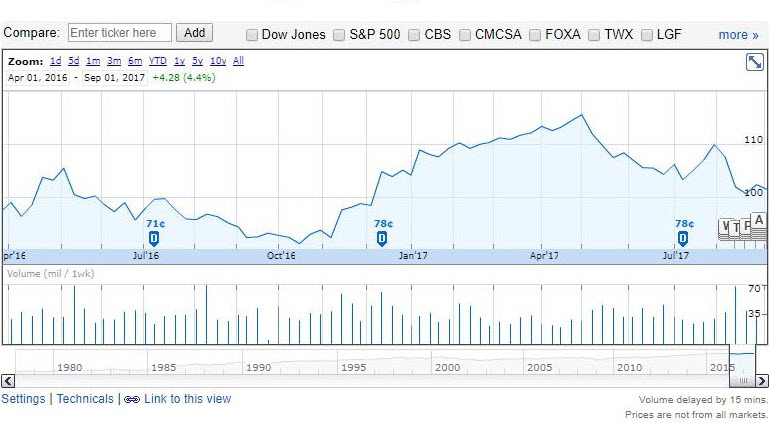 Empirical example: Disney had sold-off from $122 per share to ~$90 per share in late 2016 or a 26% decline. I elected to sell a covered put when the shares were trading at $91.25 and agreed to buy the shares at $100, three months in the future for $9.26 per share in premium income. Disney appreciated beyond the $100 level within the contract lifespan, and I was able to realize the premium income by electing to cancel the contract (buy-to-close) for $1.08 per share to net $8.18 per share or $818 in profit. 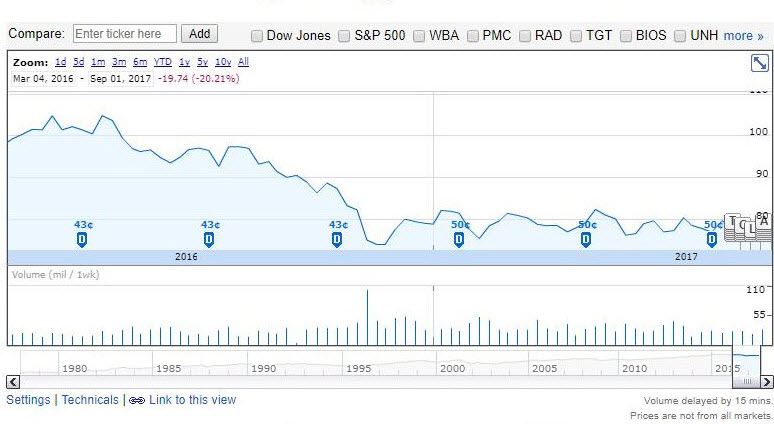 Empirical example: I had a long term position in CVS with an average share price of ~$96. CVS had sold-off from its highs of $115 to $80 per share or 30%. I elected to sell a covered put when the shares were trading at $81.35 and agreed to buy the shares at $85 one month in the future for $4.39 per share in premium income. CVS didn’t appreciate beyond the $85 level within the contract lifespan, and I was assigned the shares which translated into decreasing my average share from ~$96 to ~$86 per share or decreasing my price by 10%.

Covered put options can be very valuable regardless of objective since these instruments provide optionality about initiating a position, generating income and lowering the cost basis of an existing long term position. I’ve shown three empirical examples of each objective and strategy behind the trades. Limiting one’s options trading to large-cap, dividend paying household names can mitigate risk as these companies have a history of resiliency, dividends, share buybacks and major acquisitions to drive growth.

Disclosure: The author is long Disney, Nike and recently relinquished his CVS position. The author has no business relationship with any companies mentioned in this article. He is not a professional financial advisor or tax professional. This article reflects his own opinions. This article is not intended to be a recommendation to buy or sell any stock or ETF mentioned.