Why Oil Prices May Have Peaked

Crude oil futures peaked about a week before the OPEC meeting just below $59/bbl. Prices had been in an uptrend since October 6th, just before Hurricane Nate disrupted production in the Gulf of Mexico. There had also been indications by the White House that President Trump would soon deliver a speech explaining why he would not certify Iran’s compliance with the terms of the nuclear sanctions agreement. As a result, oil prices first rose as a result of the hurricane, followed by a risk premium due to the stand-off with Iran and expected extension for of the OPEC/non-OPEC deals through 2018. 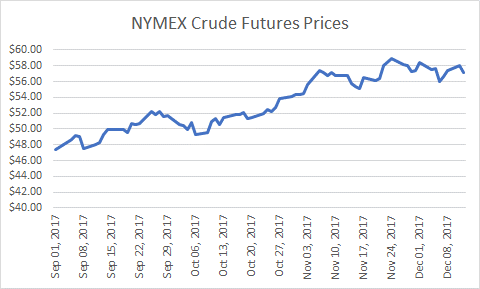 Given the OPEC announcement on November 30th, which means that the deals are baked-into crude futures for 2018, the question is, where should prices go? Based on the factors below, I expect prices to trade lower.

As mentioned above, a U.S. decertification of Iran’s compliance could lead to the re-imposition of U.S. sanctions. But it has been recently reported that Russia signed deals to re-sell Iranian oil. That appears to get around any potential US sanctions in limiting Iran’s exports, decreasing the risk premium.

Baker Hughes reported that the North American oil-directed rigs rose by another 2 in the week ending December 8th to average 751. Rigs had been declining since August, but have been recovering since early November, albeit slowly, implying a continued rise in shale oil production. 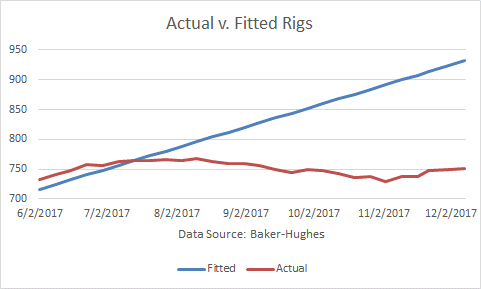 The DOE reported that September production rose by 290,000 b/d from August, a very large increase to 9.481 million barrels per day (mmbd). There had been some concern that shale oil production growth had slowed, but this latest data point disputes that. 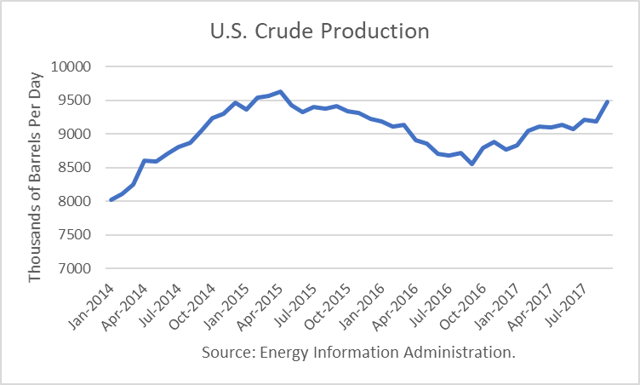 Furthermore, the DOE just released its December outlook. It projects crude production will increase by 570,000 b/d from December 2017 through December 2018. 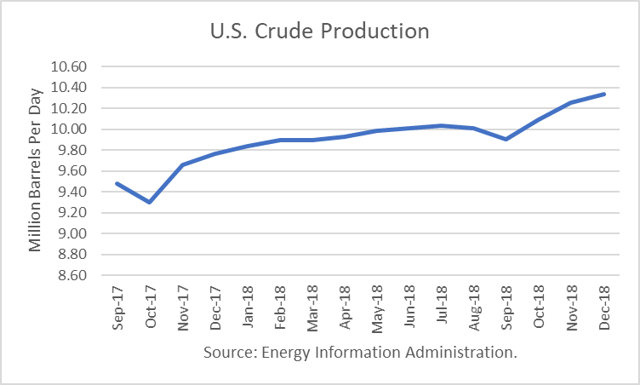 In addition, it projects that production of Natural Gas Plant Liquids (NGPL) will increase by 510,000 b/d over the same period. Together, that is an increase of 1,080,000 b/d. NGPLs contribute and are included within, the U.S. petroleum supply. 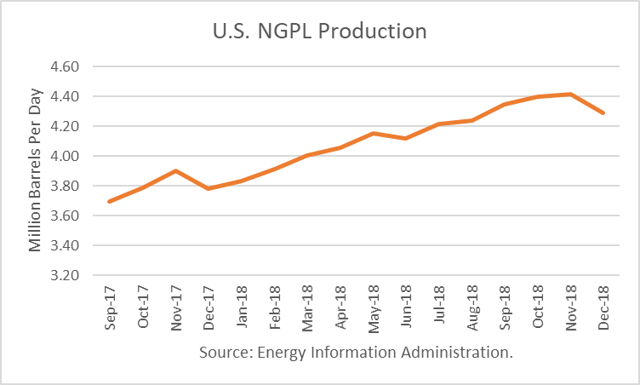 According to the latest DOE forecast for U.S. crude and product inventories, the first quarter, seasonal inventory build will extend into the second quarter at an accelerated rate and peak in November. Ending December 2018 inventories would be 48 million barrels higher than end-2017 stocks. 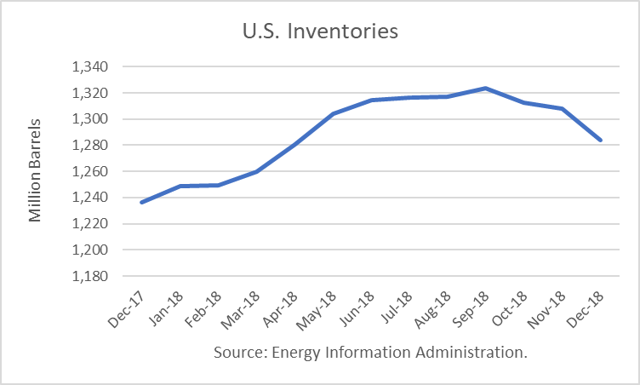 The DOE’s projection of global OECD inventories show a build in January, followed by a drop in February. However, ending December 2018 inventories would be 43 million barrels higher than end-2017 stocks. 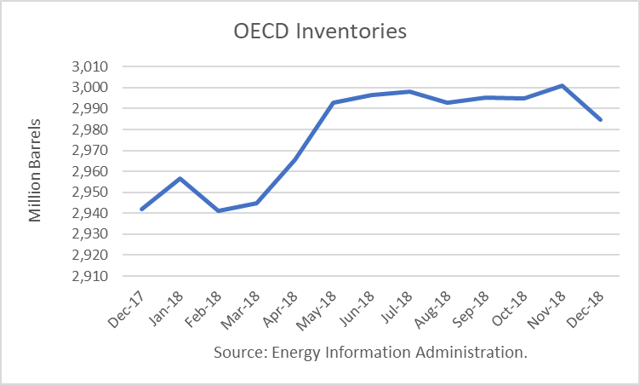 As a result, OPEC will have failed to meet its goal of reducing global stocks to their five-year average. At that point, the deals will be considered to have failed and will be terminated, resulting in market competition and lower prices, which are needed to establish an equilibrium in prices.

The rise in oil prices since late June has been fueled by rising speculative long positions. As of the week ending December 5th, long spec positions were nearly as high as they were back in February 2017. The risk now, as it was then, is a sharp drop in prices once the bull-case is threatened by unsupportive data. 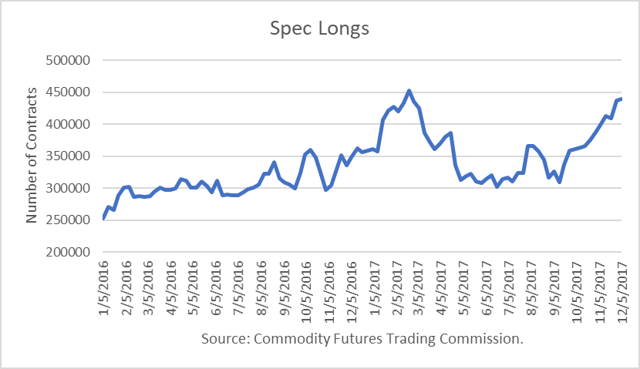 Equally important, speculative short positions have been reduced to the minimum levels they have been over the past couple of years. As a result, the shorts have a demonstrated capacity to sell around 150 million barrels once they gain confidence that oil prices will drop. 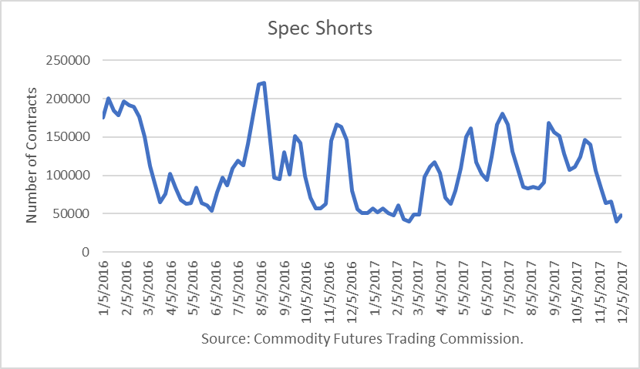 Finally, hedge sellers (oil producers) had largely decreased their hedges in anticipation of higher prices. If prices begin to drop, and they fear lower prices, they have a demonstrated capacity to hedge another 200 million barrels. 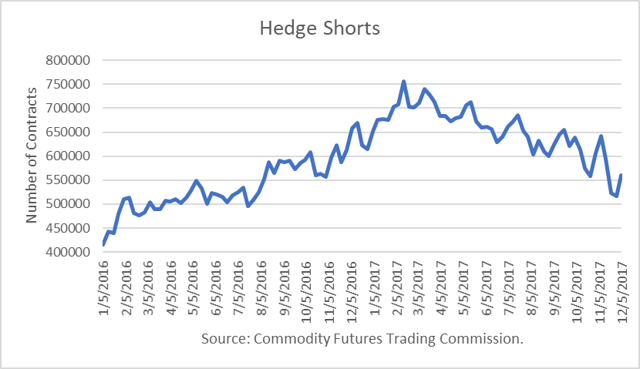 I expect that weaker market fundamentals will develop in the weeks and months ahead. If prices begin dropping, as I expect, the downward price movement will accelerate.