Back in February, I shared a map for the possible development of a consolidation that started at the end of January in the S&P 500 index. The expected drop followed the post although a little bit postponed.

As top metals are literally dead and still between the confirmation levels these days, I would like to update a lively S&P 500 index chart. For the gauge of American stock market, I prepared two separate charts as it has reached the crucial support and we could have two future options here. 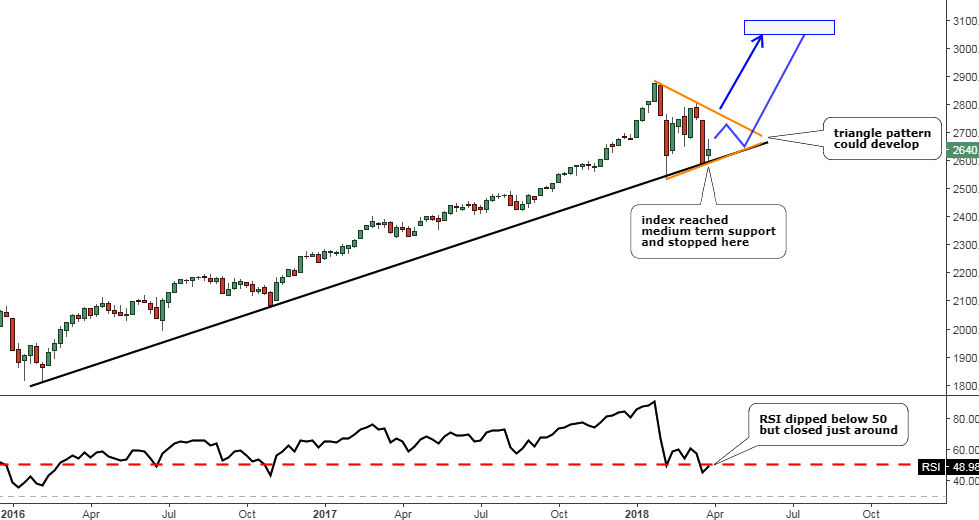 In the monthly chart from my earlier post I added the orange, medium-term support, which I highlighted in black in the weekly chart above. As we can see, that support already stopped the previous drop in February and did it again at the end of March. If the price would freeze at these levels without breaking below the former trough, then the Triangle pattern (orange) could develop as lower highs and higher lows shape it.

There are two options within a Triangle as I highlighted them with a blue up arrow and the blue zigzag. The arrow implies an immediate growth of the index as the zigzag shows short rise and correction before the pattern would be broken to the upside. Therefore the target for the Triangle is set at the two levels between the $3050 and the $3100.

The above said is true for a simple correction as it could be just the first leg of a really complex correction, which is typical for the index. So be careful and avoid excessive greed.

The reason for this is the prolonged counter trend consolidation, which has shaped the Rising Wedge pattern (blue) that in its turn worked perfectly sending the price down. The target for this pattern located at the start of it where the former trough has been filled in February at $2532. The price has hit as low as the $2586 so far on the 23rd of March, and there is more room to the downside left to complete the pattern.

The index is descending within a small red downtrend channel and is thought to complete the CD segment, which targets $2460 where CD=AB segment. The see-saw moves started on the 23rd of March shape the tiny consolidation, and we could be in the last leg now, which could touch the resistance of the red channel before the further weakness would emerge. It should be the last leg down as the current consolidation is quite large compared to the whole structure of the CD segment. It should overcome the previous low’s barrier below the $2532 to see the $2460 in the crosshair.

After the completion of this structure within the wide black channel, we would see the Bull Flag pattern on the chart, which could send the index to the upside afterward.