The latest Federal Reserve meeting indicated that interest rate increases might need to be accelerated while boosting its domestic GDP estimates for 2018 and 2019 alluding to a domestic and global economic expansion. Augmenting this economic backdrop is a record number of IPOs, a record number of global merger and acquisitions, rising interest rates, market volatility, deregulation and tax reform. All of these elements provide an ideal confluence that bodes well for the financial sector. The Goldman Sachs Group Inc. (GS) in particular looks to benefit in unique ways due to the consulting fees regarding mergers and acquisitions, trading around market volatility, launching of its cryptocurrency futures contracts as well as rising interest rates as Goldman Sachs has entered into the commercial banking segment when the bank acquired GE Capital’s savings business in 2016 assuming approximately $16 billion of deposits at the time. JP Morgan (JPM), Citi (C) and Bank of America (BAC) are all poised to benefit from the favorable economic backdrop as well however I feel Goldman is in a unique position to benefit across the board in all business segments. Goldman Sachs is relatively inexpensive based on historical standards after a string of quarterly results that have beat Wall Street’s estimates. Goldman Sachs offers a 1.3% dividend yield that was recently increased and a share buyback program to augment the overall favorable backdrop providing a compelling long-term buy.

The Federal Reserve expects the economy to continue to strengthen and inflation to rise in the near future. The economic strength coupled with inflation provides an environment that’s ripe for rising interest rates. The consensus was perceived as very bullish on the domestic front and that the Federal Reserve will continue on its path of rising interest rates and may even accelerate its pace of rate hikes. “Participants generally saw the news on spending and the labor market over the past few quarters as being consistent with continued above-trend growth and a further strengthening in the labor markets.” Members of the committee debated specific monetary policy language to be used for future statements moving away from “accommodative” to “neutral or restraining.” If the committee moves to the following language, then a major pivot in policy may be underway from supporting growth to attempts to controlling growth. The committee estimates GDP to be at 2.7% in 2018 and 2.4% in 2019 and stated: “tax changes enacted late last year and the recent federal budget agreement, taken together, were expected to provide a significant boost to output over the next few years.” Provided this backdrop of positive economic commentary, financials are poised to benefit as a result.

There’s no question that the financial benefit from rising interest rates, however, IPOs and M&A activity set records in the first quarter of 2018. Increased market volatility bode well for the investment banks as their trading businesses pick up. For 2017, the stock and bond markets were relatively calm and moved steadily up however this path is changing course. Thus far in Q1 of 2018, 45 IPOs have hit the market along with record M&A activity and banks’ advisory and underwriting arms will likely post better than expected results as a result. Bank of America (BAC) has one of the largest deposit bases among all banks and serves as a pure play on rising interest rates. Goldman Sachs (GS) branched out into consumer banking with its Marcus product and will thrive under market volatility and robust environment for investment banking. Recently, Goldman Sachs announced that it’s launching a cryptocurrency features exchange to offer its clients access to the cryptocurrency space where volatility bodes well for the banking giant. It’s noteworthy to highlight that Goldman recently made $200 million in profit in one day as volatility in the markets surged in February.

Goldman Sachs posted quarterly results that are beginning to bear the confluence of a global economic expansion record, number of IPOs, record number of global merger and acquisitions, rising interest rates, market volatility, deregulation and tax reform. Goldman posted its highest quarterly revenue in three years and coming in at $10 billion. Goldman also posted its third highest quarterly EPS of $6.95 along with record revenues in Investment Management and record assets under supervision (Figures 1 and 2). Furthermore, the stock currently trades at ~$238 down from its 52-week high of $275 or 13% from its highs. From a valuation perspective, Goldman Sachs remains relatively cheap on a P/E and PEG basis (Figure 3). Goldman’s P/E ratio is at a multi-year low, and its PEG resides below 1.0 while its book value currently stands at $178 per share. 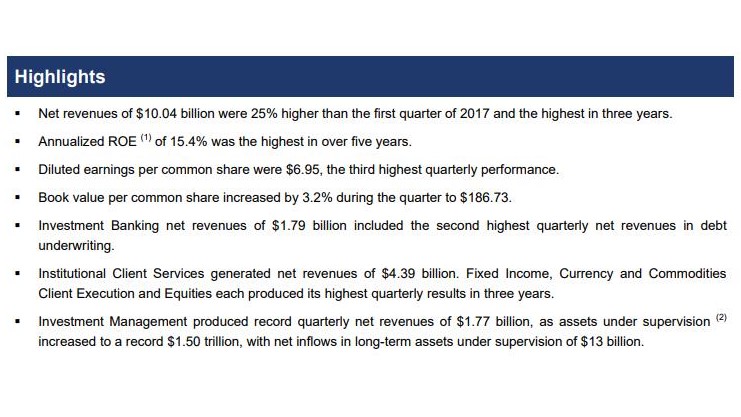 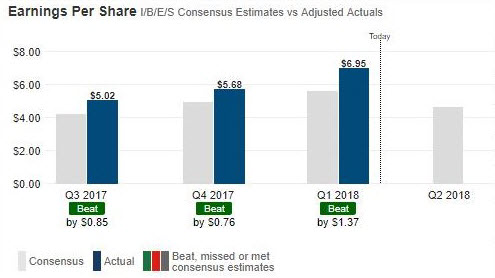 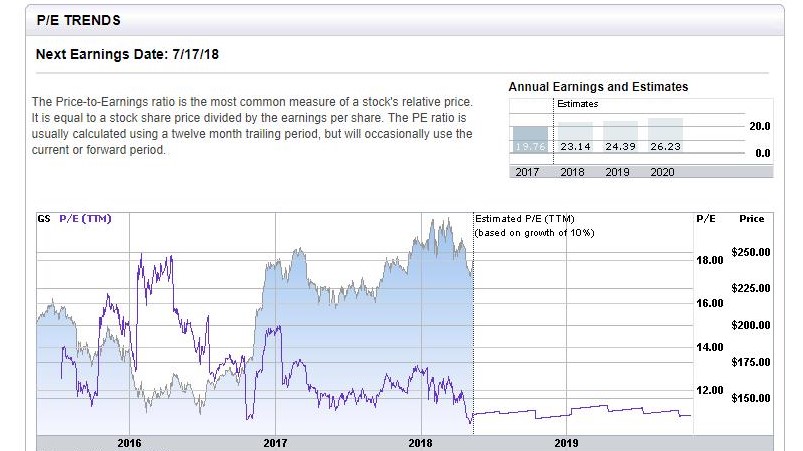 The current economic backdrop is highly favorable for the financials which includes a rising interest rate environment, tax reform, low unemployment, wage growth, deregulation and tax reform. These factors have led to a record number of IPOs and M&A activity in which Goldman benefits in a big way as they serve as advisory and underwriter roles. The Federal Reserve indicated that interest rate increases might need to be accelerated and boosted its GDP estimates for 2018 and 2019. In deregulation and rising interest rate environment Goldman may be more empowered to increase share buybacks and dividends over the coming years to reflect the economic expansion domestically and abroad. The stock currently trades at ~$238 or 13% off from its highs potentially presenting an opportunity to enter a position. Goldman Sachs (GS) is relatively inexpensive and poised to benefit from this favorable backdrop for the foreseeable future.

Disclosure: The author holds shares of Goldman Sachs, Bank of America, Citi and JP Morgan and is long all of these holdings. The author has no business relationship with any companies mentioned in this article. He is not a professional financial advisor or tax professional. This article reflects his own opinions. This article is not intended to be a recommendation to buy or sell any stock or ETF mentioned. Kiedrowski is an individual investor who analyzes investment strategies and disseminates analyses. Kiedrowski encourages all investors to conduct their own research and due diligence prior to investing. Please feel free to comment and provide feedback, the author values all responses. The author is the founder of stockoptionsdad.com a venue created to share investing ideas and strategies with an emphasis on options trading.