Volatility in oil prices makes investing in the energy sector a risky proposition. The collapse in oil prices following the OPEC meeting in November 2014, at which Saudi Arabia announced its intent to flood the market to put American shale oil producers out-of-business, resulted in a rout in energy equities prices.

The Energy Select SPDR ETF (XLE) fell by 37 percent from November 26, 2014, to January 20, 2016. For many investors, the drop had become too large to sustain, and they closed their positions, locking-in a substantial loss.

XLE has recovered its loss, and as of July 27th, the price was nearly identical to its value on November 26th, 2014. But the recovery in oil prices, due to heightened geopolitical risks, also makes them vulnerable to another downward correction.

Citicorp, for example, issued a forecast proclaiming that “the bull argument is based on a faulty analysis,” and that oil prices “will fall back into a band between US$45 and US$65 in just over a year.”This raises the question of whether investing in the energy sector represents an attractive risk-reward opportunity.

Energy sector prices are based both on oil prices as well as the growth in companies’ production volumes. And XLE prices have an 84% negative correlation to oil prices (November 26, 2014, to July 27, 2018). I tested the concept of including an oil price hedge to an energy sector portfolio (XLE) and found that it provided a better risk-adjusted return than an Unhedged XLE portfolio. 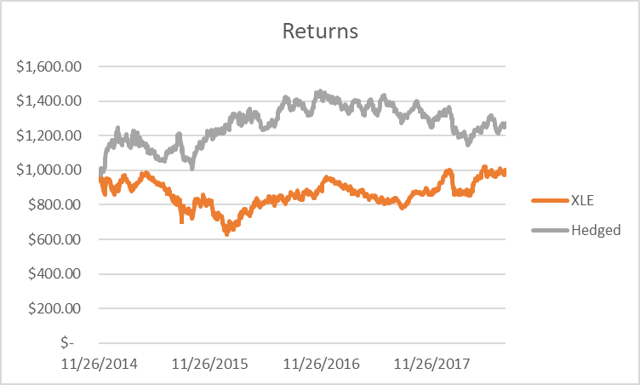 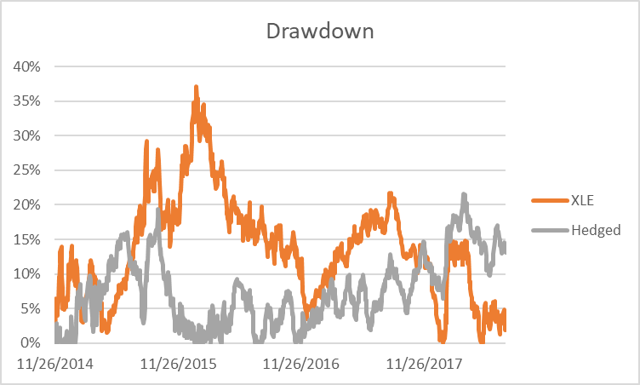 To hedge the oil price risk, I added the ProShares UltraShort Bloomberg Crude Oil (SCO), which is designed to provide “twice (200%) the inverse of the daily performance of the Bloomberg WTI Crude Oil SubindexSM. The ‘UltraShort’ funds seek results for a single day that match (before fees and expenses) two times the inverse (-2x) of the daily performance of a benchmark.”

I use drawdown-from-peak as my main risk measurement since it shows the loss that was sustained from a “high water mark.” I believe this loss is the primary risk that should be minimized. For the test period, a hedge ratio of 30% provided the lowest drawdown from the peak. In other words, for a $100,000 portfolio of XLE contracts, there would be a $30,000 portfolio of SCO contracts.

Investors should attempt to construct the highest risk-adjusted portfolios to maximize returns. And portfolios should be constructed to keep losses within maximum tolerances. If losses exceed tolerances, investors may liquidate positions when the tolerance limit is met, locking in losses that may difficult or impossible to recover.

It is often said that the best portfolio is one in which the investor can sustain even during the worst period of losses. And so with oil price risk being a major factor in the returns of energy sector portfolios, it is prudent to reduce oil price risks through hedging.

The test period has run through a complete down and up oil price cycle. And the hedge enabled the portfolio to achieve a lower risk and a higher return overall.

Oil price risks have become highly elevated as a result of the U.S. pulling out of the Iran nuclear deal. Sanctions may result in lower Iranian crude exports beginning in November.

On the other hand, the president has several options to reduce oil price spikes. President Trump has asked Saudi Arabia to pump more oil. The treasury secretary can grant waivers to some countries, allowing them to buy Iranian oil. And oil from the Strategic Petroleum Reserve may be released to offset losses to production. With the various risks that can move prices up or down, a hedge for the energy sector is likely to provide valuable benefits.