October 30, 2017 was one of the best days of the year for the young cannabis industry.

It was a groundbreaking moment for the cannabis industry because it was the first time that a big alcohol company had invested directly in a cannabis company.

In the short run, Canopy shares jumped more than 23% in one day on the news.

In the long run, it triggered a 10-week rally in Canopy – and the entire cannabis sector – that sent shares deep into a new all-time high. Take a look. 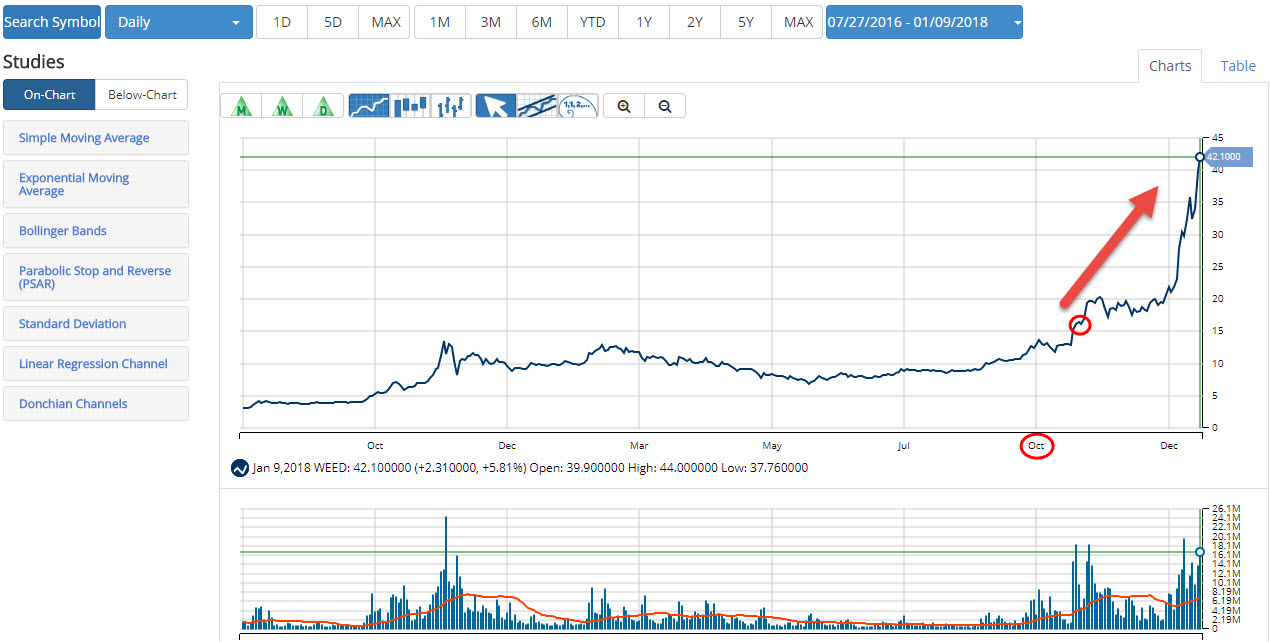 Today I see this same cycle about to repeat itself.

Rumors began swirling days ago that the third-largest beer maker in the US is in talks to buy or partner with a leading Canadian cannabis company.

This could be a repeat of the chart above, and I am going to show you how to potentially profit.

Another potential blockbuster deal is brewing between big alcohol and the young cannabis industry.

Bloomberg reported this week that Molson Coors (TAP), the third largest US brewer, is in deal talks with a few Canadian cannabis companies.

Here are some more details directly from Bloomberg:

Molson Coors Brewing Co. has been engaged in discussions with several Canadian-based cannabis companies to invest in them and collaborate on future cannabis-infused beverages in a move aimed at stemming the brewer’s declining beer sales, multiple sources familiar with the matter have told BNN Bloomberg.

The tie-up would see another major U.S. player enter the lucrative cannabis market ahead of Canada legalizing recreational cannabis on Oct. 17. Molson Coors has spent the past six months engaged with as many as four separate cannabis companies, including Aphria Inc. and Aurora Cannabis Inc., discussing its plans to enter the marijuana space and the discussions are said to be serious, the sources said. A deal could be announced before the end of the year, one of the sources said.

I am expecting to see an official deal hit the wire much sooner than later — within a couple of weeks.

My experience has shown me that when M&A rumors are leaked to the Street – a deal is close at hand.

If that happens, I expect shares of Aurora or Aphria to spike higher.

In the long run, news of a big new deal could easily trigger a multi-month rally in the entire cannabis sector.

Aurora Cannabis (ACBFF) is one of the largest Canadian cannabis companies and an early industry leader. Aurora looks like an ideal way for big alcohol to enter the cannabis market. Aurora is hugely ramping its production capacity with Aurora Sky, a new cannabis greenhouse that will be over one million square feet when complete. This will make Aurora one of the cannabis industries lowest cost producers, a key factor for long-term success. After seeing huge gains in 2017, Aurora is down in 2018. I see that as an opportunity to buy the dip.

Aphria (APHQF) is also one of Canada’s largest cannabis companies with a similar business model to Aurora. Aphria is also ramping production and looking to become one of the cannabis industries lowest-cost producers. Aphria shares were also up big in 2017 but have been down in 2018. That is creating a great value opportunity for longer-term investors.

Aurora and Aphria shares have both been rebounding in the last two weeks as investors anticipate good deal news. If the deal falls through shares could see a little pullback as shorter-term traders rotate out of shares.

I see another mega deal brewing between big alcohol and the young cannabis industry. History tells me these deals can be a huge catalyst for shares and the entire cannabis sector. Keep your eye on Aurora and Aphria, both are in play and could see a nice pop any time.