Hello traders everywhere. That's right, the stock market is of off to a roaring start to the year and it is, in fact, the best start for the S&P 500 since 1991. The S&P 500 posted a gain of +2.9% for February following a gain of +7.9% in January. That's helping put December in the rearview mirror for many traders.

Not to be outdone the NASDAQ closed out the month with a 10-week winning streak, it's longest such weekly streak since 1999. On a monthly level, it posted a positive gain of +3.4% for February, backing up the +9.7% gain in January.

Then we come to the DOW which opened March trading up about 270 pts before backing off that high. The DOW posted a monthly gain of +3.6% in February continuing its positive momentum from January where it posted a +7% gain. 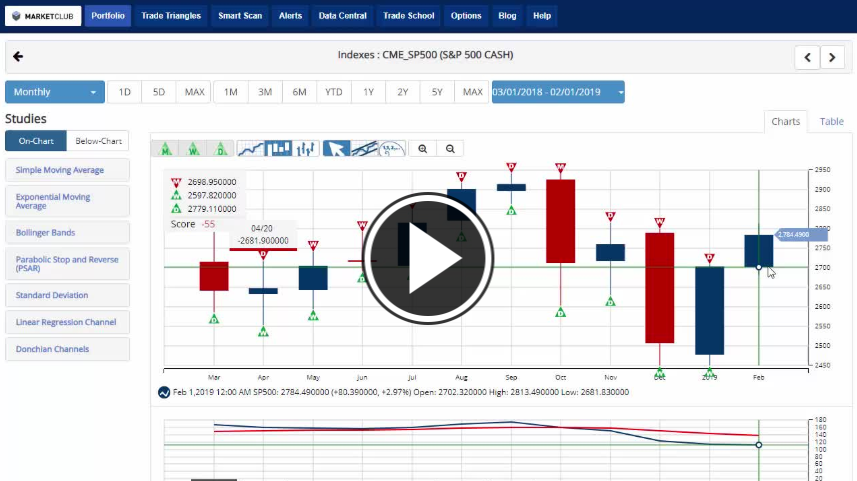 Crude oil opened March by issuing a new green monthly Trade Triangle in early trading but has seen a sell-off from the new three month high. Look for the uptrend to continue moving forward. On a monthly level, crude oil posted an impressive +6.35% gain for February riding the momentum of the great January gain of +16%.

On the flip side, gold experienced a tough to February ultimately losing -.67% on the month and is going to lose -1.48% on the week which triggered a new red weekly Trade Triangle indicating that a short position may be in order for the short-term timeframe.

Don't call it a comeback! Bitcoin posted a monthly gain for the first time since July 2018, that's right, that's a six month losing streak. It broke that streak by posting a gain +12.05%, but it is losing -7.9% for the week. So, even though bitcoin made some gains it still has a lot of work to do to end the long-term downtrend.