Illinois continues to advance towards its goal to legalize recreational cannabis in 2019.

JB Pritzker, a major advocate of legalization, is leading the big push toward legalization. It was a staple of his campaign and now that he’s in office, Pritzker says his goal is to legalize recreational cannabis as quickly as possible.

Legislators have been busy working on a bill to move legalization down the pipeline, and it sounds like they are making a lot of progress.

Here’s an update that comes from the Belleville News-Democrat.

State Sen. Heather Steans and state Rep. Kelly Cassidy, both Chicago Democrats who have been working on marijuana legislation for two years, said they wouldn’t rush the process on behalf of revenue.

“Assuming that we want to have some revenue, I think we’d like to pass it by the end of May,” Steans said. “But I think both Representative Cassidy and I have been very clear that the revenue is not what is motivating or should drive this legislation, but obviously it’s a side benefit piece that can also come.”

Here’s where things get even more interesting.

If Illinois does legalize recreational cannabis – which looks like a sure thing at this point – analysts are projecting significant supply shortages.

According to a recent study from Freedman & Koski, a Colorado-based consulting firm that assists state and local governments with cannabis legalization, demand for cannabis could be around 550,000 pounds per year.

However, the report goes on to project that the market only has the capacity to supply between 35% and 54% of potential demand.

This is creating a tremendous opportunity for early leaders in the Illinois cannabis market. They will benefit from robust demand, strong pricing power, and little competition.

These are the reasons I am excited to share a cannabis stock that I think is in the best position to thrive on Illinois’ legalization.

Cresco Labs (CL,CRLBF) is a US-based cannabis company headquartered in Chicago, Illinois. Although Cresco is a multi-state operator, its specialty is Illinois where it has an early lead on the competition.

Shares of Cresco began trading on the Canadian Securities Exchange in early December under the ticker symbol CL. I see average daily trading volume of 150,000 so this ticker is plenty liquid.

Shares also just began trading in the US under the ticker symbol CRLBF. I see average daily trading volume of 106,000 so once again this ticker is plenty liquid.

Cresco is a direct play on Illinois moving to legalize recreational cannabis. The company already has a strong and growing presence in Illinois.

Cresco is already a multi-state operation, but as you can see in the charts below, its focal point is Illinois and the Chicago area.

Looking forward, I expect Cresco to continue to build on its early lead in Illinois by expanding its cultivation capacity and adding more dispensaries.

Cresco Has Been Red Hot on the Chart

Cresco’s early lead in Illinois has not gone unnoticed. Shares have been red hot since going public in early December, hitting a series of new all-time highs. 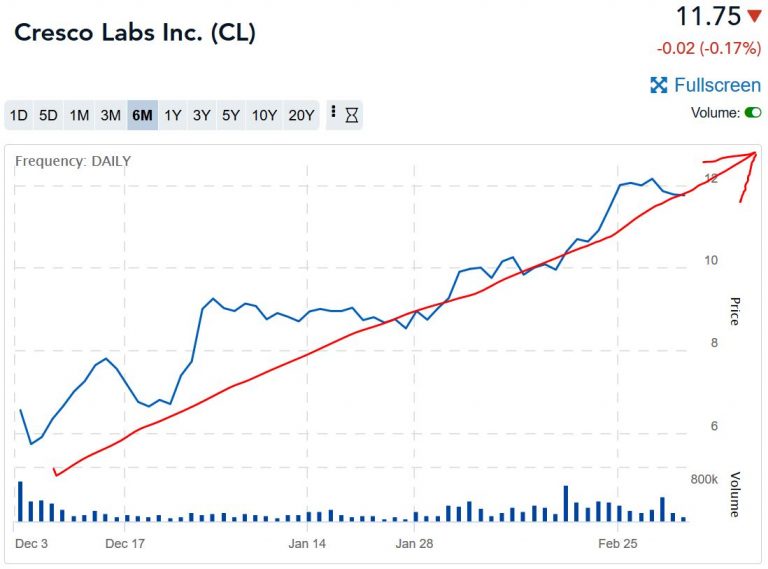 What Should We Expect Moving Forward?

I expect good things from Cresco as they expand in Illinois and other high-growth cannabis states.

One thought on “The #1 Stock To Play Illinois Going Legal”