Cannabis is one of the most regulated industries in the world. Those regulations are helping the industry gain credibility and keeping consumers safe. However, these regulations are also creating unique security needs.

Canadian cannabis companies must comply with strict regulations on how to secure production facilities, inventories, and transport goods.

These strict security requirements are creating a big opportunity for a young and promising Canadian security company that specializes in providing security services to Canada’s largest cannabis companies.

This up-and-comer provides cannabis security consulting, guarding and secure transport security services to more than 500 customers and more than 60 licensed cannabis producers, including some of the world’s largest, such as licensed producers owned by Canopy Growth Corporation.

3Sixty has a staff of over 275 employees and employs a fleet of over 60 vehicles, which management believes provides a combined security footprint to approximately 30 million square feet of patrolled area. 3Sixty transports approximately $250 million in cannabis every month for its customers.

Big Clients Signing on with 3Sixty

3Sixty has seen tremendous momentum in the last few months, landing a string of big-time clients that rank as the biggest in the entire global cannabis industry.

On January 14, SAFE announced a multi-year deal with Canopy Growth Corp, the largest cannabis company in the world.

Here are some more details from the press release:

These deals are setting the stage for substantial revenue growth in the next few years.

3Sixty began trading on the Canadian Securities Exchange on January 8 under the ticker symbol SAFE. I see average daily trading volume of close to 1 million shares to this ticker is plenty liquid.

Shares also trade in the US under the ticker symbol PTVFY. I see average daily trading volume of 150,000 shares so this ticker looks plenty liquid as well.

Despite the potential, SAFE is still is still in its infancy. I see a market cap of just $75 million, a fraction of larger cannabis companies such as Canopy and Aurora.

3Sixty is up 36% Since Going Public in January

SAFE has done well since going public in January. Shares initially surged higher, fell back some and then began climbing higher again. 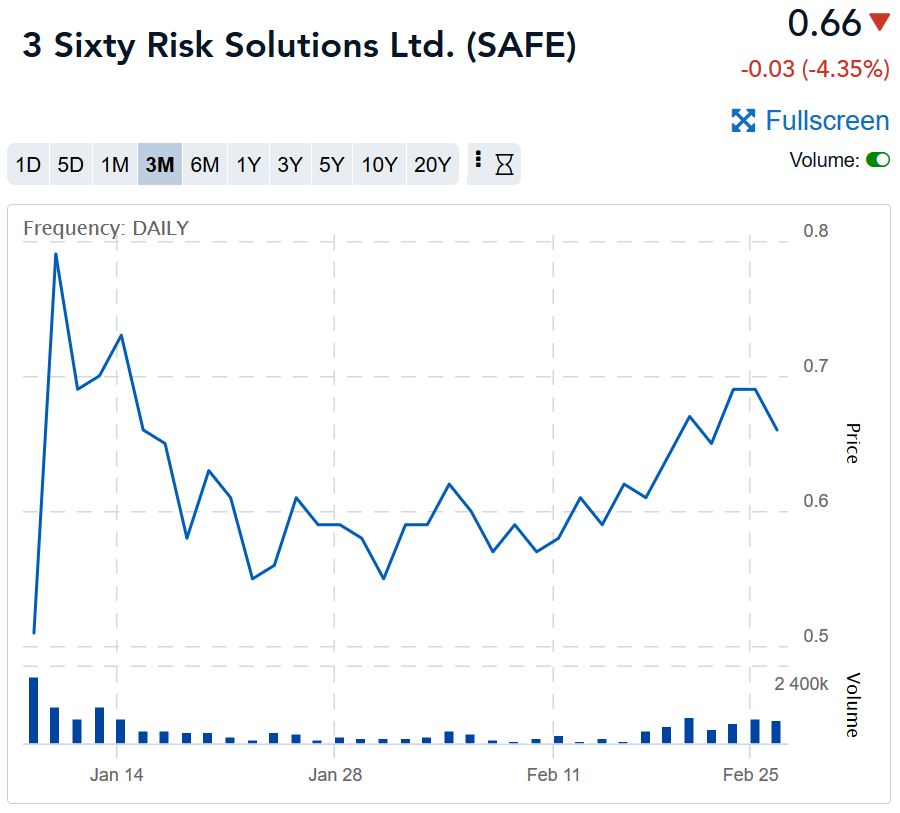 The Big Picture on 3Sixty

The cannabis industry has some very unique security needs, and that is creating a big opportunity for 3Sixty. 3Sixty is an early leader in the Canadian cannabis security industry. It has secured a string of contracts in the last 6 months that should set the stage for substantial revenue growth in the next few years.