Last month I spotted the reversal Head & Shoulders pattern on the daily gold chart and shared it with you. Let’s see how it played out.

I entered the replay mode on the chart below and deleted the bars that appeared after the previous post to show you what I was expecting from the Head & Shoulders pattern. I would like to add more educational annotations for you in this post.

The previous annotations were switched to gray except the target level for the Head & Shoulders pattern. So, what I was expecting to appear on the chart? First of all, there should be a breakdown below the Neckline, which would confirm the pattern (short red down arrow). Usually, after the breakdown, the price retests broken Neckline (blue up arrow). Only then, the market continues its move in the direction of a target (long red down arrow).

Now, let’s see how it actually played out in the chart below. 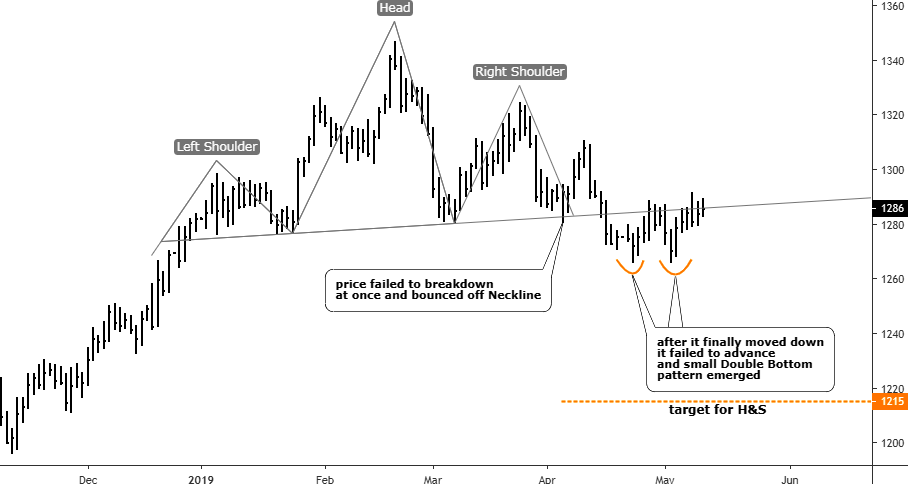 Gold couldn’t break the Neckline at once as it bounced off it and that reverse even threatened the former top, which is not good. Then the price finally moved down through the Neckline, but it failed to advance to the target area. I highlighted with two orange semicircles the small Double Bottom reversal pattern, which was established lately. This is not what I was expecting as you can compare for yourself with the first chart above. The price couldn’t trigger both target and invalidation levels. It hovers around the Neckline, so it is better to exit the trade if someone is in as the pattern doesn’t behave as planned.

Let’s zoom out and come back to the master weekly chart, which was posted in January. Maybe we can find more clues there now as time goes by and the structure gets clearer.

In this updated weekly chart I switched off the 3rd option (red C3-D3), which implied more weakness for the gold before the second leg up to emerge as we don’t see any severe drop of gold these days. I kept only two options highlighted in blue (C1D1) and green (C2).

Let’s focus on the first leg up (end of 2015) marked as the blue AB segment as I would like to draw your attention to the large visible consolidation (red diverging trendlines) that occurred ahead of the last move up in that first AB segment.

Now, let’s look to the right into the area, which was highlighted with orange trendlines, here we can also see the large visible consolidation, although it has a different shape. This price behavior could build a famous Bull Flag pattern. I added the black flagpole on the left for more visualization. This pattern adds chances to the simple option of the second upside leg (blue C1-D1). The target of the Bull Flag is located at the $1445 (flagpole distance added to the breakout point). To remind you, the target for the blue C1D1 is set $45 higher at the $1490 (CD=AB).

To hit the targets mentioned above, gold should first break out of the orange flag above the $1300 and then overcome the top of the green Triangle in the $1360 area. If it fails there, then the green option of the large triangle could come into force.

The RSI has kept above the crucial 50 level despite the strong downside pressure that occurred lately. It’s a bullish sign.