Let’s discuss losers and managing options trades that move against you despite the high probability of winning the trade at the onset. When engaging in options trading, losing trades are inevitable however managing these trades via risk-defined trades, position sizing, diverse sector allocation, buying-to-close for a gain or loss, allowing assignment to occur at expiration, selling covered calls on the assigned stock and rolling the trade out to a different strike level can mitigate risk and allow long-term successful options trading. In the end, following a set of options, trading fundamentals will enable your portfolio to appreciate steadily month after month for consistent portfolio appreciation. Since options are a bet on where stocks won’t go, not where they will go, this is accomplished without predicting which way the market will move. These fundamentals provide long-term durable high-probability win rates to generate consistent income while mitigating drastic market moves. Following these option trading fundamentals, I’ve demonstrated an 86% options win rate over the previous 8 months through both bull and bear markets while outperforming the S&P 500 over the same period by a wide margin producing a -0.1% return against a -5.6% for the S&P 500. This outperformance is due in part by proactively addressing losing trades to manage the overall risk profile.

The goal in options trading is to leverage cash and/or stock and sell options using the underlying cash and/or stock to collect premium income. This can be performed in a high-probability manner where a statistical edge is to the options trader’s advantage. Despite the odds being in your favor, occasionally trades can move against you in a major way and negate a large swath of winning trades. Let’s say 12 trades were placed and closed with an average income per trade of $65, translating into $780 in income. If one trade goes south and assignment occurs at $8 below the strike, then this would more than wipe out the $780 in profit and result in an overall loss on the portfolio, translating into a net $20 loss over these 13 trades since options trade in blocks of 100 shares. The onus is on the trader to circumvent this situation and manage these trades before this huge loss in relation to all the option-income received. The example used above is the primary rebuttal from cynics when it comes to an exclusive portfolio driven by options trading. Even if this assignment occurs, the stock was purchased at a substantial discount relative to where the stock traded when the option was placed. Additionally, the assignment can be held until the underlying stock recovers beyond the assigned strike price.

The vast majority of my trades are cash covered puts; thus, I enter the trades with undefined risk on the downside. This type of trade provides a margin of safety since cash is leveraged/earmarked to buy shares at a lower price by an agreed upon date in the future. You’re taking on the obligation to be assigned shares or put another way; you agree to buy shares by the agreed-upon price by the agreed upon date. At expiration, if the stock remains above the strike, then the premium is realized. If a stock currently trades at $72 per share, then I could agree to buy shares at $65 one month into the future instead of buying shares outright at $72 while collecting a premium income of $1.00 per share or $100 on the trade. I like this go-to type of trade when coupled with a high IV Rank value because there’s a high probability that the shares will not be as volatile as predicted by the IV Rank and a 10% margin of safety to the downside is built into the trade. Taken together, these type of trades are placed one standard deviation out-of-the-money to yield ~85% probability of winning the trade at expiration. If the shares break below the strike of $65, then you’re effective purchase price would be $64 per share since $1.00 per share was received upfront. I usually take the assignment since I’m receiving shares at a substantial discount, and upon assignment, I can elect to sell covered calls against the position to mitigate risk.

Long-term options trading success can be achieved to generate consistent income and mitigate risk in a high-probability manner. I was able to win 86% of my options trades while capturing 54% of the gross premium income. This was achieved by trading options in a diversity of tickers for a total of 66 unique stocks and ETFs. The 7 fundamentals that provide long-term options trading success for durable portfolio appreciation these include; being an overall options seller, selling options in high IV Rank scenarios, selling options that possess liquidity in the options market, setting an appropriate probability of success using Delta as a proxy, managing winning trades, maximizing number of trades to allow the probabilities to play out and limiting position sizing/allocation. These essentials resulted in a wide outperformance relative to the S&P 500, posting a -0.1% return compared to a -5.6% return for the S&P 500 (Figure 1). Despite the great track record, the 10%-15% of losing trades can wreak havoc on all these successes (Figure 2). 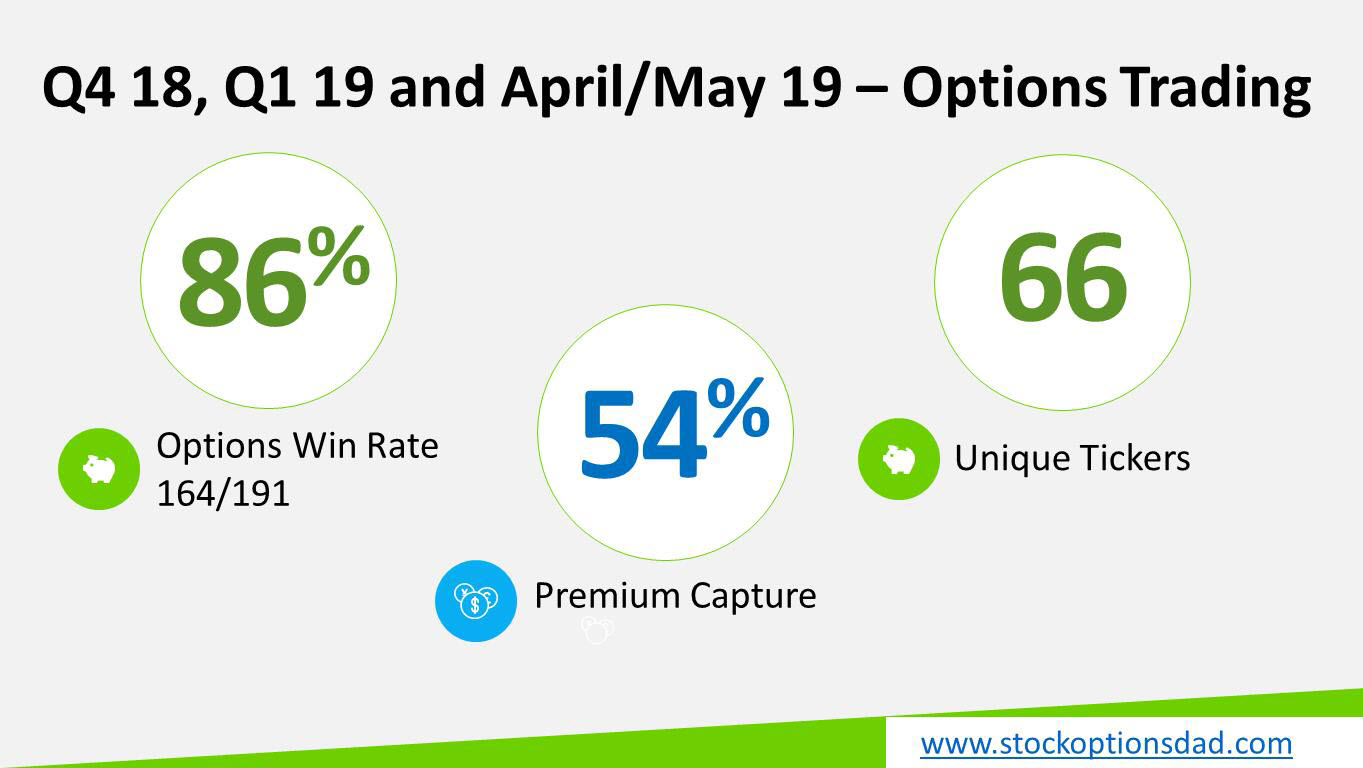 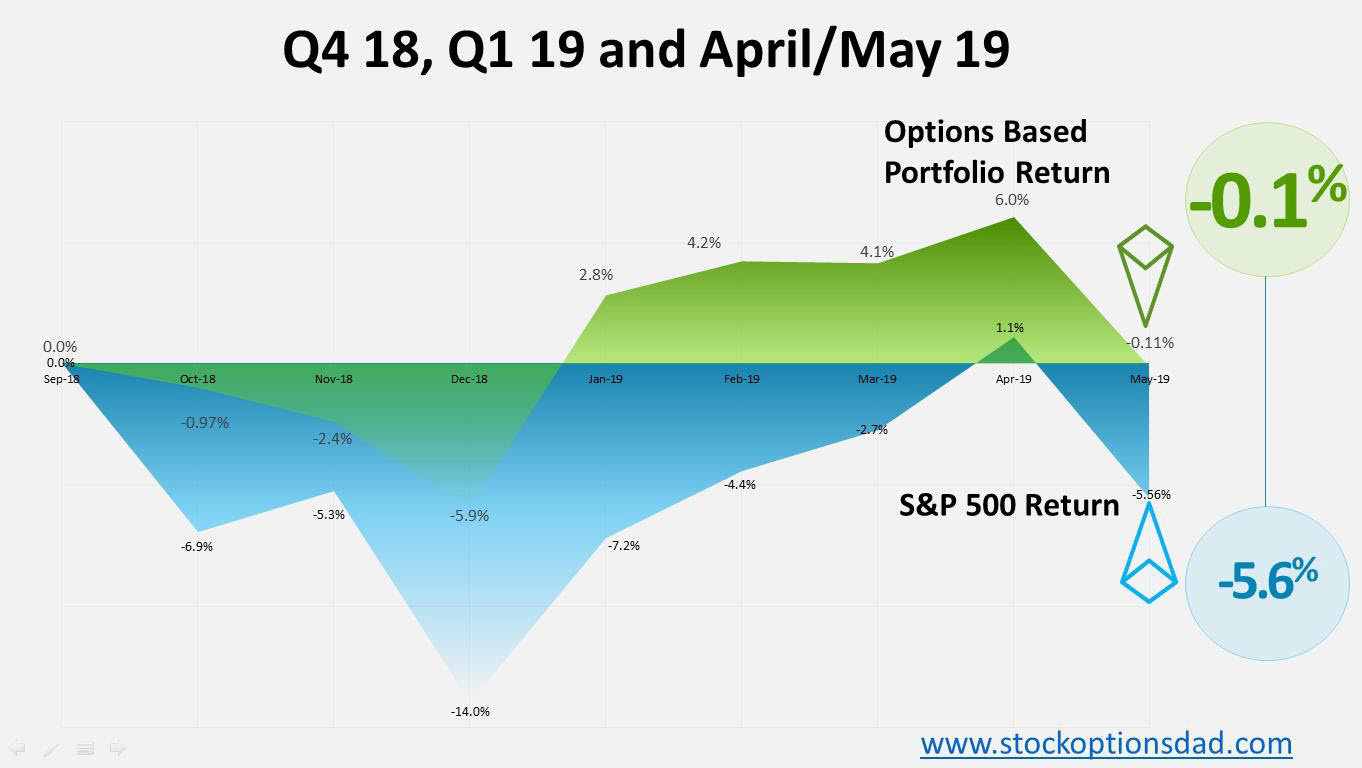 A variety of actions can be deployed in a losing trade situation to mitigate risk and optimize portfolio performance. A rule of thumb that I generally stand by is limiting myself to selling options on underlying dividend-paying stocks in the large-cap space thus an event I’m assigned, I’ll own shares of the underlying company at a significant discount (since I always sell options out-of-the-money in high IV Rank situations) and a dividend to reinforce the position. There are four actions that I usually employ to manage trades:

1. Take the assignment and sell covered calls against your long position

2. Buy-to-close at a loss to avoid assignment altogether before expiration

3. Buy-to-close at a loss and sell a new further out-of-the-money option to reset your positioning

4. Sell option spreads to define your risk (sell a put and buy a further out-of-the-money put)

Upon assignment, selling covered calls is a great way to extract additional value while waiting for the underlying assigned position to recover or appreciate beyond your assigned price. If an option is near expiration and has already broken through my strike price, then I often buy-to-close at a loss, especially if earnings are due before expiration. If this situation presents itself, buying-to-close and taking the loss may be the superior route since the odds are not in your favor moving into earnings/expiration. If the underlying stock has already broken through the strike, then upon earnings, the stock may sink lower and result in a huge loss upon assignment. After buying-to-close at a loss (if that was the best action to take) then selling a further out-of-the-money option will offset the loss and reset the odds of being in your favor.

To define your risk, you can sell an option spread, which is when an option is sold, and another option is purchased further out-of-the-money. In this situation, you receive premium income for selling the option, and you use part of that income to buy protection via buying a further out-of-the-money option. If you sell a put at a strike of $65 and receive $100 in premium income, you can buy a further out-of-the-money put strike at $60 for $40 in debt. The net premium income would be $60 ($100 - $40), and the max loss would be $500 ($65 strike - $60 strike) if the stock broke through the $60 level. If the stock breaks through $60, you have the right to sell shares at $60 since you bought the put option as well for protection. So, the ideal scenario is the income of $60 at expiration, and the worst case scenario is a max loss of $500. This can be modulated to define risk and optimize net premium income.

Everything that could’ve gone wrong in May went wrong. Airlines, banks, retail, oil, pharmaceutical supply chain, and trade war sensitive stocks all disproportionally impacted my portfolio. Despite the diversity of tickers across sectors, occasionally trades go horribly bad even in large-cap, dividend-paying stocks that are ostensibly lower risk equities. CVS Health (CVS), American Airlines (AAL), Bank of America (BAC), General Electric (GE), Kohl’s (KSS), Schlumberger (SLB), US Oil ETF (USO) and US Steel (X) were all assigned and have weighed heavily on my overall portfolio throughout the past 8 months. All of these assignments are down double digits (~-20%) from the assigned purchase price. These stocks have been dead weight, especially the stocks in the oil space and in the middle of the trade war crossfire such as US Steel, General Electric, and Kohl’s. Case in point, CVS fell from $70 to $53 per share, dropping 24% in one week and Kohl’s dropped from $72 to $51, dropping 29% in a single week. These drastic market moves are unpredictable; thus, managing risk is essential. These unrealized losses could have easily been avoided had I executed a buy-to-close at a loss before earnings being announced for both Kohl’s and CVS and/or sold an option spread to define my risk.

On the flip side, it’s sometimes just a matter of time until these stocks explode higher and break through the assigned purchase price. As these stocks break out of their bear patterns, those unrealized losses become erased and thus potential gains, reinstating the options thesis over the long term. This has happened with several tickers over the past 8 months. The following tickers are examples of when assigned stocks recover and can then be sold at a profit; Micron (MU), Biotech ETF (XBI), YELP (YELP), Wynn Resorts (WYNN), US Oil ETF (USO) and PayPal (PYPL) for example are stocks that were assigned and subsequently sold at a profit. All-in-all, since September of 2018, 209 options trades have been placed with 21 of those resulting in assignments (10 of those assignments were subsequently sold at a profit) and 8 were bought-to-close to avoid assignment altogether (Figure 3).

This comprehensive options strategy provides key fundamentals for long-term successful options trading. These fundamentals allow your portfolio to appreciate steadily since options are a bet on where stocks won’t go, not where they will go, without predicting which way the market will move. These fundamentals provide long-term durable high-probability win rates to generate consistent income while mitigating drastic market moves. I’ve demonstrated an 86% options win rate over the previous 8 months through both bull and bear markets while outperforming the S&P 500 over the same period by a wide margin producing a -0.1% return against a -5.6% for the S&P 500 with a lower risk profile. However, unrealized losses can pile up and negate these performance metrics if proactive management isn’t utilized. This includes a variety of techniques that can be deployed to mitigate unrealized losses and/or assignment altogether.

Thanks for reading,
The INO.com Team

Disclosure: The author holds shares in AAPL, AMZN, DIA, GOOGL, JPM, MSFT, QQQ, SPY and USO. The author has no business relationship with any companies mentioned in this article. This article is not intended to be a recommendation to buy or sell any stock or ETF mentioned.