Last Wednesday gold had hit the minimum target of $1490 that we were waiting for since January when the price was at $1288. The target was clear, but the path was not and only this May the market eliminated one of three possible options. One month later, it has finally shown its real face leaving the single initial path to go.

Last month gold advanced quite well, but it failed ahead of the first target. I spotted the consolidation on the 4-hour chart and shared it with you to reassure disappointed bullish traders as to when the price doesn’t reach the target someone could start to exit early. Consolidations are tricky by nature, and I showed you three possible types it could unfold. Let’s see below which one you liked the most.

The triangular type was your first choice; the simple correction was the second with a minor gap, and the complex flat was the least liked. And again the majority of you were right as this was a triangle. Let’s see it in the updated 4-hourly chart below. 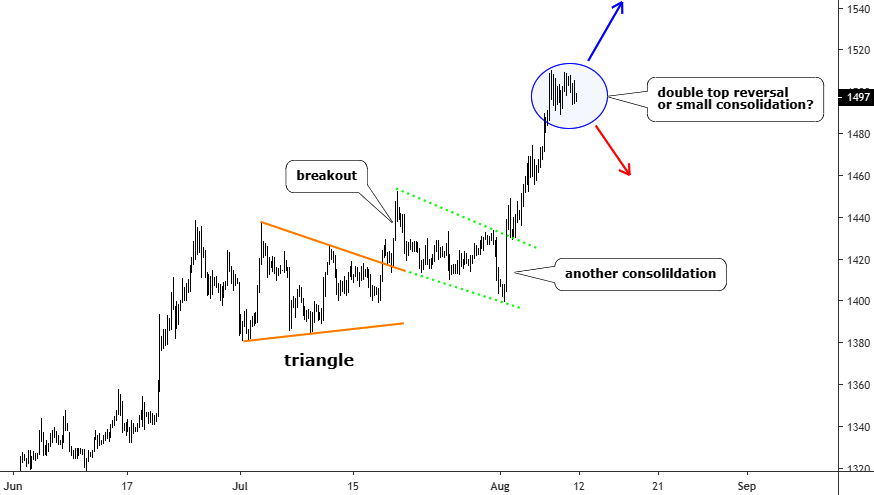 The market sentiment was so bullish that the last zigzag within the triangle to the downside didn’t touch the lower bound of the figure. After that, we could see the clear breakout and the following classic pullback to the broken trendline. Then the market again has paused to think as the price couldn’t overcome the apex of breakout and dropped within another consolidation, which was contoured with the green trendlines. Interestingly, the lower green trendline is precisely the continuation of the upper orange trendline of the preceding triangle. That’s how the market sees it.

The next breakout during the first day of this month finally spurred enough buying demand to reach the target and even hit the round number handle of $1500. Now the market again charts the zigzags in a range of $1489-1510. Will it drop from here to retest the historical bottom of $1000 or will it continue further up to reach the next upside target? Not clear yet. In case of a reversal, we should wait for the drop to break below the preceding point of growth ($1400).

Let’s look at the bigger time frame to see what happens there.

This time I kept it simple as I already had applied AB/CD projections and Fibonacci retracement levels, which correlated amazingly well. I used a classic trendline approach with one single orange trendline, which was built through valleys of 2005 and 2008. It was broken in 2015, and from that time there is a textbook pullback, which aims to retest the broken trendline before it continues in the direction of the breakdown.

You can see that we have an empty space for the current move up to touch the contact point of the broken trendline. And the next target of $1577 (1.272 of AB, 61.8% Fibonacci retracement) amazingly sitting right in the above-mentioned retest area. Therefore, the chances are good that we still can reach the target of our priority.