All three major indices ended 2019 in rarified territory as the Santa Claus rally capped off a euphoric market. The S&P 500, Nasdaq, and Dow Jones ended 2019 at all-time highs. The S&P 500 posted its best return in nearly 20 years, coming in at a 28.9% return.

2019 was a unique year on multiple fronts where the markets roared higher despite impeachment proceedings, U.S.-China trade war, Federal Reserve actions, inverted yield curve, and slowing economies abroad. Furthermore, for the first time in history, the U.S. economy has started and ended a decade without a recession, with the economy expanding for a record 126 consecutive months (Figure 1). 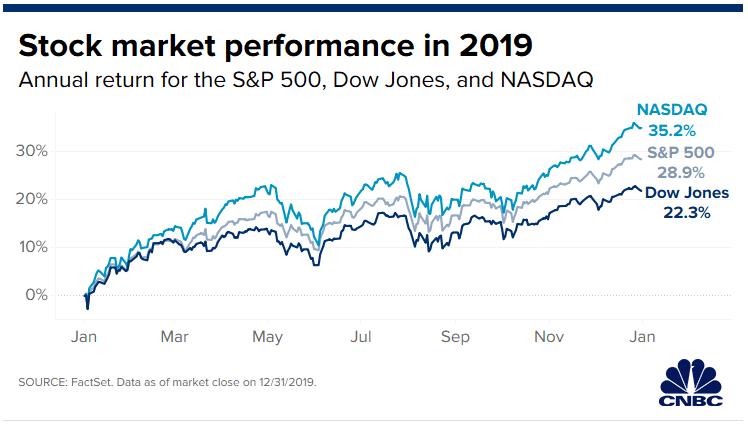 Currently, the markets are faced with stretched valuations absent of any significant volatility over the past few months. 2020 predictions are shaping up to widely variable from the collective grouping of investment firms (Figure 2). The average forecast is looking bleak after a banner 2019. I feel these bleak forecasts are rooted in political uncertainty, geopolitical tensions, slowing company buybacks, stretched valuations, and inevitable market volatility. As 2020 unfolds, a margin of safety via raising cash as a core position may be wise. 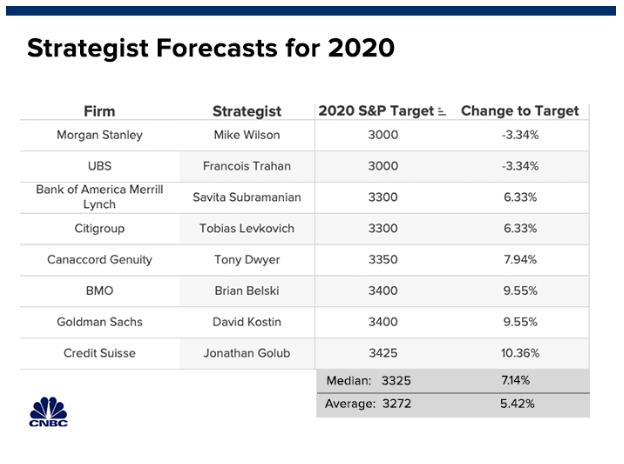 Domestically, the presidential elections will be held in November, and this election could drastically shift Wall Street sentiment depending on the outcome. Currently, there’s uncertainty in the political arena as to whether Donald Trump will be reelected or not. There’s also uncertainty on which democratic candidate will face off against Trump. Depending on the democratic nominee, the degree to which healthcare and taxes are impacted will depend on the candidate. If the Democrats win the presidency, a less favorable business landscape will result (i.e., higher corporate taxes and universal healthcare push). If Donald Trump wins reelection, then a continuation of the pro-business backdrop will remain, and a wave of certainty will wash over the markets (i.e., lower corporate taxes, repatriation and trade policy).

Geopolitical tensions are abundant and may introduce uncertainty or a market sell-off. Hong Kong protesters and mainland China is still ongoing, Saudi Arabia and Iran post missile attack, US-China trade war, Brexit, US, and North Korea and recently the US killing a high ranking Iranian military official. Any of these events could trigger market instability in 2020.

Per Goldman Sachs, corporate buybacks are “plummeting” amid growing global uncertainty, and it could have a big impact on the market. Buyback spending slowed 18% to $161 billion during the second quarter, and Goldman anticipates that the slowdown will continue. The amount spent on buybacks this year is down 17% from a year earlier, although it is on track to be the second-highest total on record, Goldman said. For 2019, total buybacks will drop 15% to $710 billion, and in 2020 they see a 5% decline to $675 billion, the firm predicted. Share repurchases have been key during this bull market, pouring hundreds of billions into the markets to prop up stock prices.

The slowdown in buybacks is part of a larger trend of spending cuts as trade uncertainty and stalling global growth weigh on the market. Total cash spending fell by 4% year over year in the first half of the year. It anticipates cash spending for the entire year will decline by 6%, making it the sharpest yearly decline since 2009. During the third quarter, “CEO confidence plummeted to the lowest level since the Global Financial Crisis,” Goldman said. It cited a recent study from Duke University that found a majority of CFOs expect the U.S. will be in a recession within the next year.

“Companies spend less cash when policy uncertainty is high. During August, global economic policy uncertainty registered the highest level in at least 20 years. Historically, growth in aggregate S&P 500 cash spending has been weaker during periods of high policy uncertainty. The combination of ongoing trade conflict and next year’s US presidential election will likely result in lingering uncertainty,” according to Goldman.

Valuations are certainly stretched based on historical metrics where the average P/E ratio of the S&P 500 is 15 relative to the current P/E ratio of 18. Frothy valuations have resulted in a rotation into value stocks with lower P/E ratios since September. Michael Wilson, a chief U.S. equity strategist, believes this rotation will continue into 2020. By any valuation measure, stocks are extended and the composite valuation metrics are indicating that stocks are near .com valuation levels from 2000 (Figure 3).

Earnings pose one of the biggest risks for stocks in 2020. Many companies have been revising their earnings forecasts lower, a trend that does not support the lofty expectations that rising stock prices have set.

Savita Subramanian, a strategist at Bank of America, recently put out a note saying the corporate earnings outlook is flat and that the market “feels toppy and weak revisions don’t bode well for early 2020,” Subramanian wrote. “The US equity market has become totally detached from underlying profitability,” said Societe Generale analyst Albert Edwards. 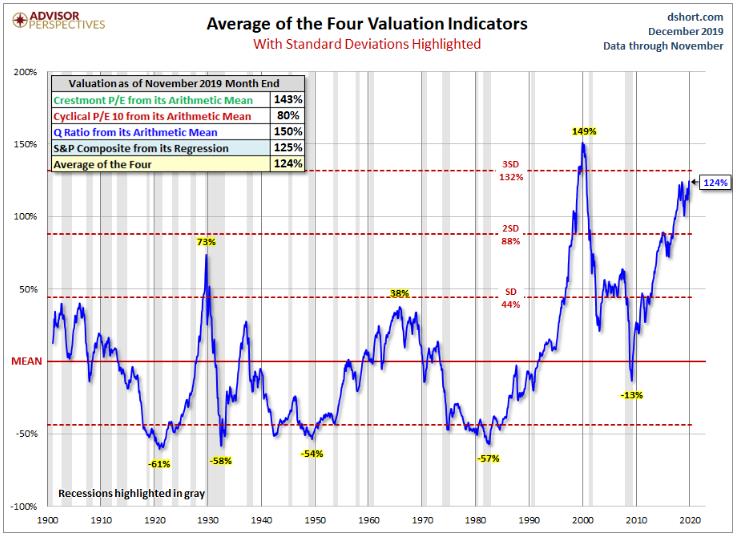 The broader indices have marched higher and higher to set new highs on what seems like a daily basis. Stocks have been on fire in the October-December stretch due to easier monetary policy by the Federal Reserve and a completed phase one trade deal between the U.S. and China that propelled the markets to even higher levels. The Federal Reserve cut rates twice since August and has signaled it will keep them at current levels for 2020.

Throughout this period, volatility has remained low, indicating that the overall market is complacent and perceived as a low-risk environment. These periods of complacency are inevitably met with increased levels of volatility. Increased market volatility is strongly correlated to decreases in stock prices. I don’t think it will take much to set off a spike in volatility and as volatility inevitably increases, stocks tend to sell-off.

The average forecast for 2020 is looking bleak after a banner 2019. I feel these bleak forecasts are rooted in political uncertainty, geopolitical tensions, slowing company buybacks, stretched valuations, flat earnings growth, and inevitable market volatility. America will be even more divided with an impeachment trial looming and Trump’s decision to launch the airstrike that killed Iran’s top commander in Baghdad. Hong Kong protesters and mainland China is still ongoing, Saudi Arabia and Iran post missile attack, US-China trade war, Brexit, US and North Korea. Any of these events could trigger market instability in 2020. Corporate buybacks are slowing, earnings growth is flat and by some measures, these markets are near historic highs from a valuation standpoint. Volatility has remained low indicating that the overall market is complacent and perceived as a low-risk environment. These periods of complacency are inevitably met with increased levels of volatility. Increased market volatility is strongly correlated to decreases in stock prices. As 2020 unfolds, a margin of safety via raising cash as a core position may be wise.