I spotted hot trading opportunities for you on daily charts, so let’s skip straight to it. Gold will be the first.

Gold got stuck in a sideways consolidation after it hit a new high of $1748 in the middle of April. The lower peaks and higher troughs shaped a very familiar pattern of a contracting triangle (orange trendlines). The price has reached the upper side of that pattern as I write this post. Watch the price to break up out of the triangle to confirm the move up.

To find the target, I highlighted the earlier move up preceding the current triangular consolidation as the AB segment (blue) and measured it. Then I add that segment to the upside from the most recent low of $1682 to build the second CD segment with two possible targets. The first target is located at the equal distance of the AB segment at $1864. The extended target is set at the 1.272x length of the AB segment at $1913, which is just shy of the all-time high at $1921. All targets are inside the green uptrend channel. It could book 8-12% of the profit from the current level.

The RSI has been relaxing with this triangular consolidation towards the crucial 50 level from the peak. It bounced right off that support, and now it is moving up to the orange trendline resistance. It will confirm the breakout, making the double breakup both on the chart and on the RSI sub-chart.

In my opinion, the all-time high should be retested as the structures usually unfold tagging the former extremes when 61.8-78.6% Fibonacci retracement levels are passed. There are no barriers left between the mentioned resistance and the full retracement (100%).

Let’s move on to the silver daily chart. 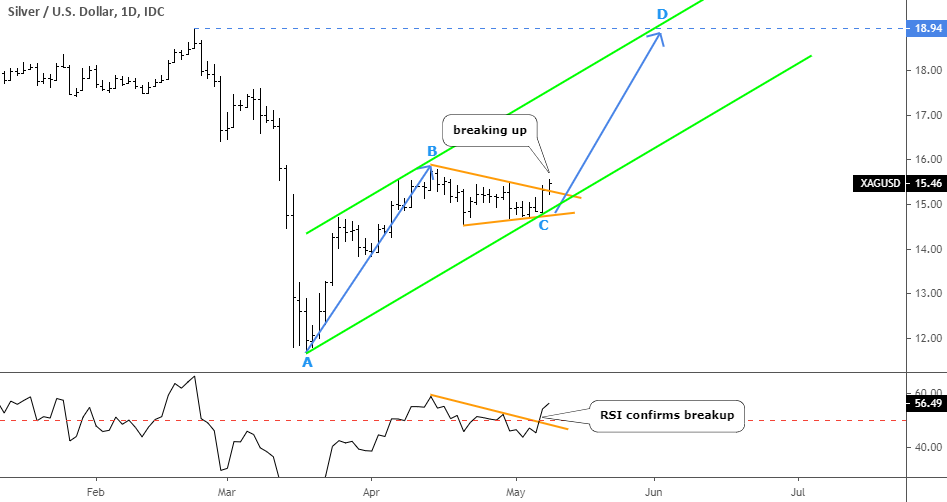 This time silver is leading as it already has the confirmation on the chart. The structure is almost the same as gold and silver peaked at the same time in the middle of April. The consolidation pattern here has a steeper upside as it shaped the same triangular pattern (orange trendlines). As I write this post, the price is breaking above the upper trendline, let’s see if it can close the day (Friday) above the pattern.

The overall structure on the silver chart is simpler as we got the first move up from $11.64, which finished last month. I marked it as an AB segment (blue). The current consolidation will join it with the next CD segment. To find the target, I added an equal distance to the recent low of $14.80. The outcome falls in the area of the former top of $18.94. The upside of the green uptrend channel is right in the same area. It could book a 22% profit from the current level, and it is more profitable than gold then.

The RSI indicator sank slightly below the crucial 50 level to have room for another rally. It already passed over the trendline resistance on the sub-chart, confirming the breakup.