Sometimes forecasts play out right after it you post on the Blog. This was true for the piece published in February when I wondered if “Another All-Time High Ahead For Palladium?”. The target set in the daily chart in the $2800 area was reached within 10 days as the metal burst into uncharted territory to book a hefty profit of 22% or $500.

To remind you, I suggested three possible scenarios of how the palladium price could go in February. The original chart is below to refresh your memory. 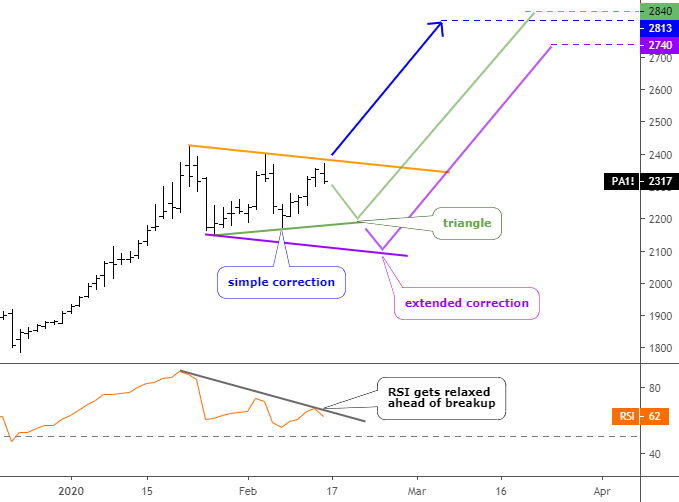 Below are your votes on the future of palladium.

The simple correction option (blue) has got the most votes and it played just perfectly as the price hit $2816 on the 27th of February. Again, the majority of you won the race! The AB/CD segmentation approach also showed exceptional accuracy as the actual top exceeded the target price by only $3.

Let me update the daily palladium futures chart for you as there are big changes that happened since the earlier post.

The pandemic slashed prices across the commodities sector, and palladium was among them to lose half of the price, reaching a 9-month low at $1355 on the 16th of March. We hadn’t seen this level since last June. It was a panic liquidation as investors considered cash to be the safest place for the money. Just one week later, the price showed a V-turn reversal to the upside above $2300 when investors saw governments across the globe introducing stimulus to support a paralyzed economy. As always, we can see here how weak hands passed their holdings to “deep pockets” of whales at a cheap price.

The palladium futures price kept firm above $2000 for almost one month until the 21st of April when the outlook for the global economy was spoiled with the shocking drop of the Chinese economy as others considered to follow this trend.

That sharp bounce up has been retraced now as the price dipped back below $2000 on profit-taking. This pullback is quite deep as it already approached the 61.8% Fibonacci retracement area around $1742. It could be enough for the price to complete the retracement, which was contoured with orange trendlines.

I highlighted the segments of the current drop with red down arrows. Two of them have been booked already. The current zigzag brought the price above $2000 and then back below it. This could be another joint ahead of the 3rd drop, which could be tricky as it can smash all Fibonacci retracement levels to retrace the preceding move up fully.

The upper trendline offers immediate resistance. I highlighted with the pink ellipse the decision area where we can see either a breakout or a reversal of trendline resistance. The former could push the price higher to tag the former top of $2816. The latter could send it in the opposite direction where it could retest the former valley of $1355. Indeed, it’s a “fly or die” situation for palladium.

9 thoughts on “Palladium Is At Decision Point: Fly Or Die?”