In my earlier post this month, I shared hot trading opportunities for silver and gold. It’s time for an update as we’ve already seen how it played out.

Before we start, I would like to show you the metals performance month-to-date in the graph below. 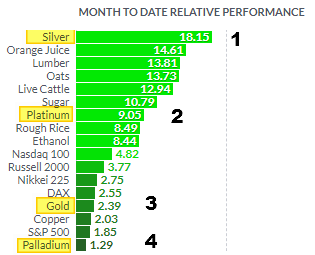 This month silver showed the best performance gaining impressive an +18.15%. The second best wasn’t gold; it’s platinum with a +9.05% gain. Gold is in third place this month, with a +2.39% rise. The most precious of these four metals, palladium, could score only a +1.29% gain.

You were accurate again with your forecast as most of you bet on silver (see chart below) under my last post. Seers in action!

Let’s get down to the updated charts, and I will start with silver.

I wouldn’t overstate to call silver’s structure as perfect! It goes accurately in line with my expectations and the triangular pattern, that was spotted last time that instantly played out for a massive gain of +11% already. Let’s see what we have now. I switched to the 4-hour time frame to focus on the current move up and cover more details.

After the price hit the $17.56 top on the 18th of May, it reversed down into a sideways consolidation within the $16.69-17.55 range (orange ellipse). At the same time, the RSI indicator started to relax, reaching the crucial 50 level, and it even sank briefly underneath.

One could notice the interesting coincidence that we have on the chart. The price hovers around the red dashed mid-channel while the RSI flirts with the 50 level waterline. The latter shows a positive signal as it bounced back above the 50 level, and waits until the price will follow to break up the mid-channel.

Another rally is pending to reach the target of $18.94 (former top), which sits right in the area of the channel’s upside.

Now, let’s see what we have on the gold chart.

One of our respected readers wondered on the earlier post why I put gold’s labels differently compared to silver. This time it’s evident if you compare the two charts. Silver’s sharp move up looks just fantastic compared to gold’s structure, which shows idleness as the price is barely moving above March’s maximum.

One could even call the current structure of gold as an emerging medium size consolidation, and it could appear to be the truth if it will reach the $1660 area. Silver gives gold another chance, and the RSI is still above the crucial 50 level. So, let me show you another pattern that could potentially emerge there.

Higher peaks and higher lows with a limited amplitude could shape a Rising Wedge pattern. It is a reversal model, and if you look at the RSI sub-chart, you can find the Bearish Divergence there as lower maximums don’t confirm higher tops on the price chart, so this could play out, but not instantly as I see another spike higher is underway. As I said, the amplitude is quite limited, so this move up could hit a not so distant target at the top of the pattern in the $1787 area.

Watch the integrity of the pattern as a break below could activate either more complex correction, that was mentioned above or even a total reversal, that was charted this March. The RSI should keep above 50 to fuel the move higher.

One thought on “Silver Hits Charts As Gold Fails To Perform”