Before we get down to the charts, let's look around to see what pushed the precious metals higher as gold posted a new all-time high last Friday at $1985, just shy of the next thousand. The silver price more than doubled since its severe crash in March. Indeed, the precious metals "volcano" awoke erupting its power on fiat, which has been printed heavily. I warned about this trigger in my April post called "Gold Could Fly Over A Helicopter Throwing Money". More than three months have passed since then, why "volcano" erupted only now?

Among the reasons, an escalating trade war and the COVID-19 pandemics. It's all about the relationship between the two largest economies and the health of each of them. US gross domestic product fell at an annualized rate of 33% in the second quarter, said the Commerce Department last Thursday. It's the largest fall on record dating back to the 1940s. The hope for a quick rebound is escaping as economists don't see the recovery to the prior peak until 2022. This contrasts with a V-shaped rebound of the Chinese economy, which showed 3.2% growth in the second quarter after a -6.8% crash in the first one. But that is not enough to restart the global economy as each player matters.

I guess the main driver for the sharp rally of the top metals was the smell of a possible cold war or even a real military collision between the US and China, that appeared recently. I hope it won't happen, but investors are hesitant to bet when this turmoil will end, so they rush to the safe-haven metals to wait through this uncertainty. At the same time, the US dollar index has been sold off dropping from its multi-decade peak at 104 that was hit in March down to the current 93 level. The nearest support is located at 88, the valley that was established in February of 2018. This leaves the room for the top metals to grow even more.

Let's get down to the updated charts, and the daily gold chart will be the first.

The price of gold hit and then exceeded the target that was set in June at $1968, where the CD segment is equal to the AB segment. The majority of you guessed it right. The metal showed surprising predictability this time as I assumed the rally right after the price could overcome the minor consolidation detected both on the main chart and the RSI sub-chart. The latter shows signs of extreme overbought position now. I think that further progress could be limited until we get the indicator relaxed.

The price could still touch the psychologically important $2000 before the retracement outbreaks. Our blue magic trend is still intact as price now crossed the mid-channel (not shown this time) and eyes the upper side of it. It's ironic, but we saw how gold was slowly crawling on the back of the lower side recently as the price was about to fall below it, and now it watches the sky.

The orange zigzag shows the path that I see for the gold onwards. The expected retracement could reach the downside of the blue trend channel around $1875-1900 before the rally continues. The extended target for the CD segment was added at a 1.272x ratio at $2050.

Silver again topped the charts of relative performance, as shown in the graph below. This time it is a year-to-date period. It scored a 37.44% gain to be the top metal this year, leaving gold and the regular champion palladium behind. 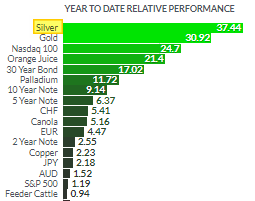 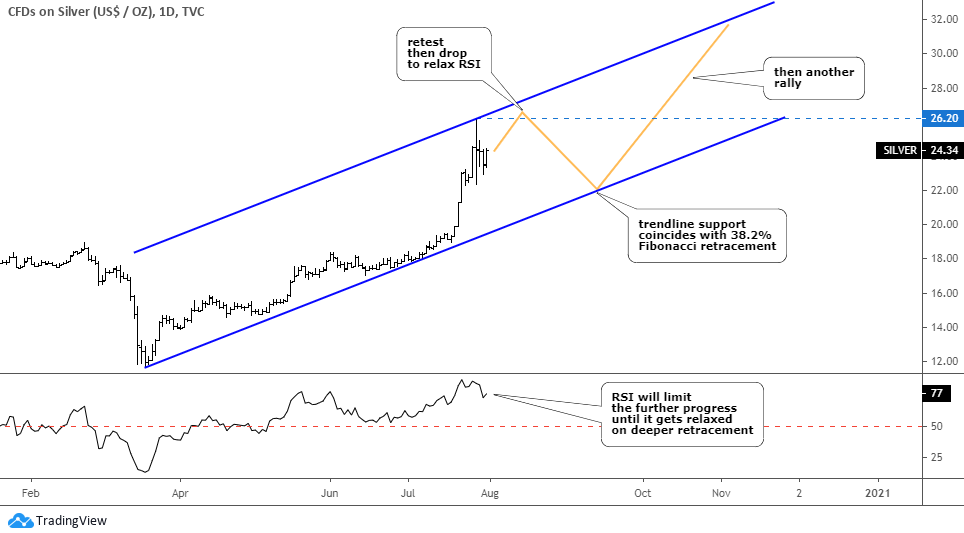 Last Tuesday, silver hit a new 7-year maximum of $26.20 exceeding all expectations, gold dynamics, and my worries about divergence. The profit-taking followed the same day as no one expected such a rally and rushed to book a hefty gain. The price dropped to $22.26 bottom before closing at $24.39 to almost match the opening price. That was a reversal sign and price indeed slid to the $22.91 low last Thursday. On Friday, silver recovered back to Tuesday's equilibrium area of $24.34.

The RSI here is in an overbought position either, although it was already relaxed down to 77 from the top of 88 as silver reached the maximum earlier than the gold. Anyway, further progress should be limited from here until we see a deeper retracement of the price.

The orange zigzag here differs from that one for gold as the conditions differ either. The more room to the upside on the RSI sub-chart leaves the option of the retest of the recent peak and even a touch of the upside of the blue trend channel around $27. Then the deeper retracement should follow, which could touch the downside of the blue trend channel in the $22 area. This support coincides with the 38.2% Fibonacci retracement area measured from the bottom of earlier consolidation.

Another rally could reach the upside of the channel between $31 and $32, and I will calibrate it after retracement gets completed.

Every century in the 20-s, we can see a major technological shift, which changes the world a lot for the sake of a better living. I hope the enormous amount of cash that has been poured by central banks around the world would at the end of the day facilitate that technological breakthrough as a side effect of saving the global economy.