This week we have a stock market forecast for the week of 4/11/21 from our friend Bo Yoder of the Market Forecasting Academy. Be sure to leave a comment and let us know what you think! 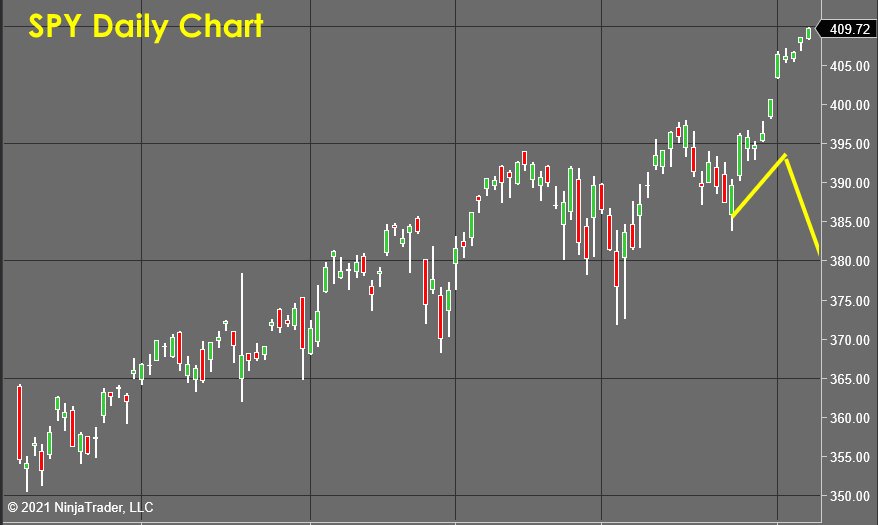 The understanding that the Federal Reserve will stop trying to fight and rather accept inflation coupled with the new round of stimulus has caused the S&P 500 (analyzed here using the SPY) to react with a gap up and run type surge.

Initially, the buying wasn’t connecting to an equal surge in internal bullish energy, but that changed later in the week as short squeezes and new longs brought their buying orders to the market.

This creates a confusing and artificial reality right now for the forces of supply and demand. Printing vast amounts of money puff up stock prices without really strengthening the underlying economy. Just like taking a big dose of caffeine stimulates your mind and body but isn’t really the same thing as being wide awake and well-rested. We are also starting to see the crowding-out effect of these stimulus programs on the hourly workforce as the difference between working and cashing a stimulus check are pretty darn close for many.

These pressures create an environment where the crosscurrents of short-term demand and long-term profit-taking make forecasting too inaccurate in this index to be useful. I will be sitting this week out in the S&P as I focus on opportunities in individual stocks. 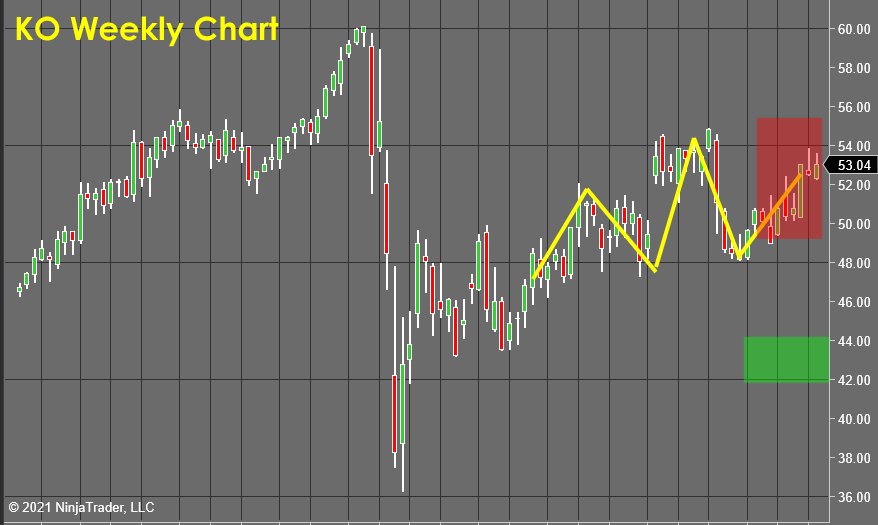 Coca-Cola (KO) is testing my patience, but in spite of my boredom, the stock continues to work within the action of last week. It pushed back up to retest (and fail below) the $54 area as forecast last week. This week’s action seems to be confirming its recent top, which bodes well for this short forecast.

I’m most excited to see how well this stock resisted the runaway market we saw in the S&P as the results of government intervention. This relative weakness should deliver some nice downside performance as the market begins the next profit-taking bearish cycle.

As the stock continues to trade within the Red Zone, I still consider it as a short opportunity as long as it doesn’t take out the highs near $55. If that were to happen, it would be considered a stop-out. 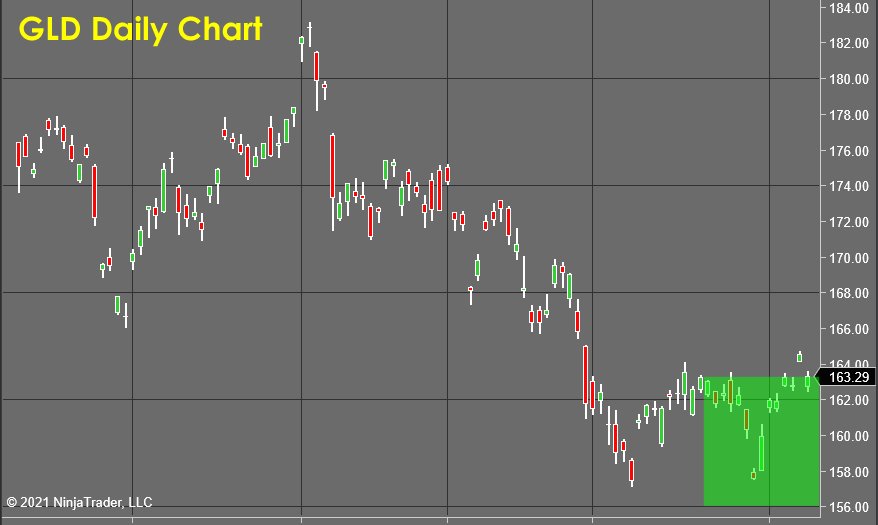 Gold, (analyzed here using the GLD) launched higher along with the stock market indexes and then gapped back down into the green zone on Friday to offer a “second chance entry” for anybody who missed the initial forecast. Gold is likely to become an area of focus as the Fed shifts its posture towards inflation from defensive to acceptance. If the price continues to push up to news highs next week, I believe it will attract a lot of attention and liquidity to this market.

I still very much believe this is a significant bottom for gold, so I don’t have a specific profit target set for this trade yet. I’m just waiting for a catalyst to gather the attention of the momentum crowd and light a fire in this market…After that happens, I’ll be in a position to take a set of measurements and get a better sense for the odds and scope of the rally longer term. 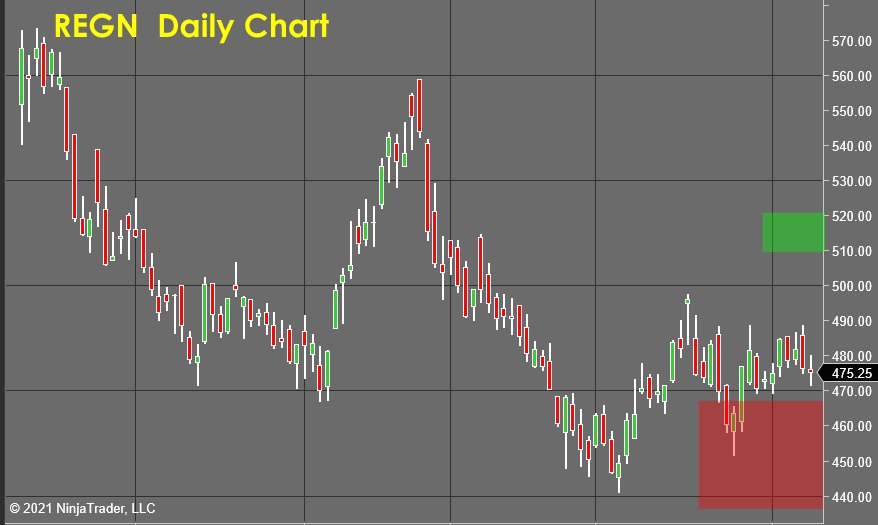 The theme of this week has been patience and process. In keeping with this, the stock of Regeneron Pharmaceuticals (REGN) didn’t accomplish much, and just stayed channel bound as it chopped the week away.

I can pretty much just repeat what I shared in last week’s forecast about “being right and sitting tight”.

By making a plan and sticking to it, I am committing to my forecast. Unless there is specific and credible evidence of failure, I know I put myself into a position where the odds were firmly in my favor and so it’s my job to do the hard thing... NOTHING (and let the math do the rest)! 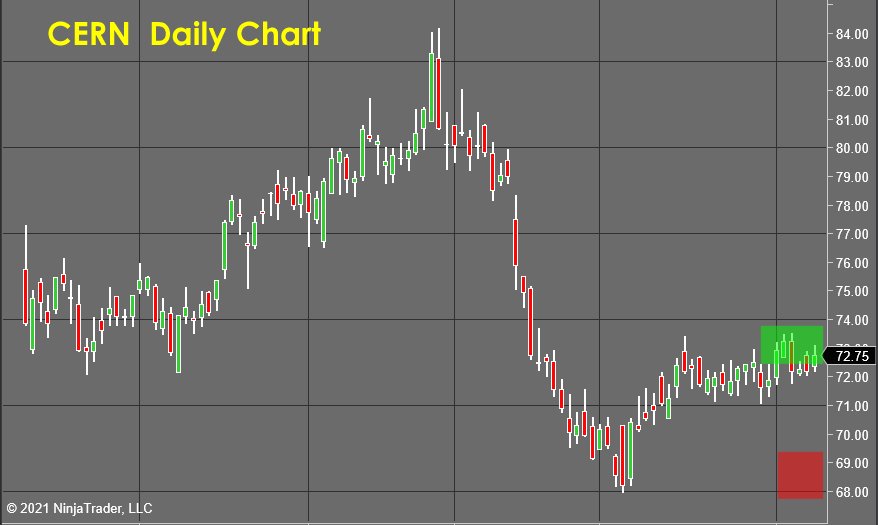 Cerner Corporation (CERN) offers an interesting short-term play to the downside. Price keeps pushing up in an attempt to break out to the upside and keeps getting rejected. At some point, the bulls will get disheartened and begin selling, and the supply/demand internals that I can measure with my market forecasting tools indicates that this selling will likely kick in next week.

That would take the price down first to take out the stops below $71, which would trigger a wave of selling and a retest of the liquidity pool near $69 per share.

Any price in the green zone would be considered a shorting opportunity for this forecast. If price takes out the highs of the green zone then stop-loss orders should be triggered.

While the odds for the target zone (Red Zone) to be tested are a bit lower than I would normally look for, this trade should pay off with a 2 to 1 or better outcome. At that level of profit, a win rate of just 34% would produce a break-even result. So think of this as a lower probability/higher reward entry possibility.