This week we have a stock market forecast for the week of 5/9/21 from our friend Bo Yoder of the Market Forecasting Academy. Be sure to leave a comment and let us know what you think! 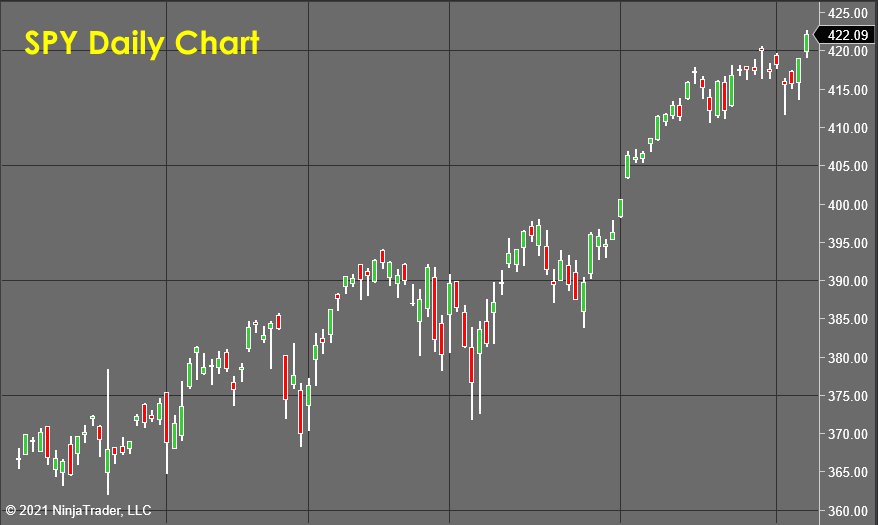 The S&P 500, (analyzed here using SPY) had created a topping process as I have been commenting on, and was on the 4th day of bearish activity when a new blast of buying took the market out to new highs.

This completes my forecast the other day when I said...

“I am expecting to see a correction form next week and then another push back up to retest the highs over the next couple of weeks.”

This push to new highs is showing as “unsponsored” in my suite of market forecasting tools. This indicates that the breakout is likely to be short-lived, and perhaps in a few weeks, we will look at this as the formation of a head for a new head and shoulders reversal pattern.

I am not looking for any new exposure this week as there is a lot open and so management of open positions and updating forecasts is the work of this week. 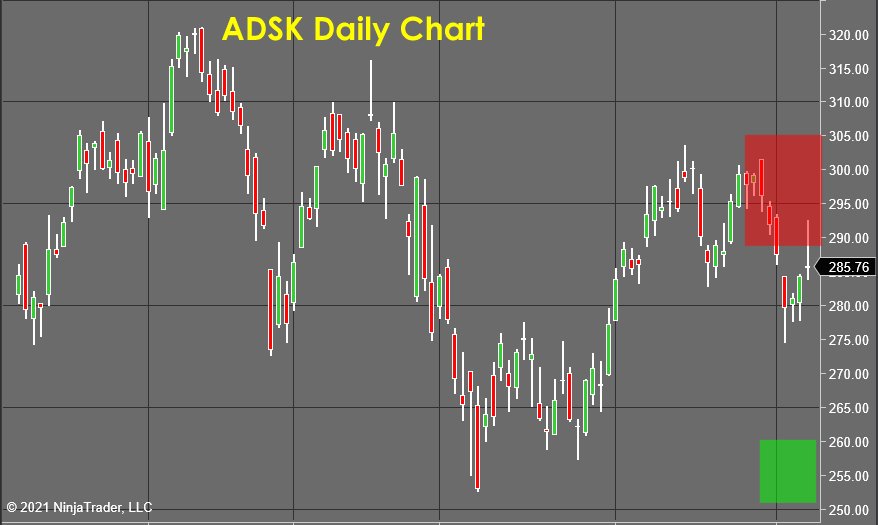 The stock of Autodesk (ADSK), sold off steadily and broke down below the recent range lows near $285 as forecast last week.

That bearish move positions this stock for a more significant fall in the weeks to come.

For now, the stock is oversold in the short term and a correction has begun to form. My forecast is that a lower high will form and that we will see continued downside movement as price pushes back down to explore the lows set earlier this year near $260 per share.

Like all my “actionable” forecasts, you will see red and green zones on the chart to designate entry, stop loss, and profit target zones. Therefore, this trade is attractive for short exposure anywhere within the red zone, with stop-loss orders set above that zones high.

My forecast would be for price to make its way back down to the green zone as the large liquidity pool near $260 per share is tested. 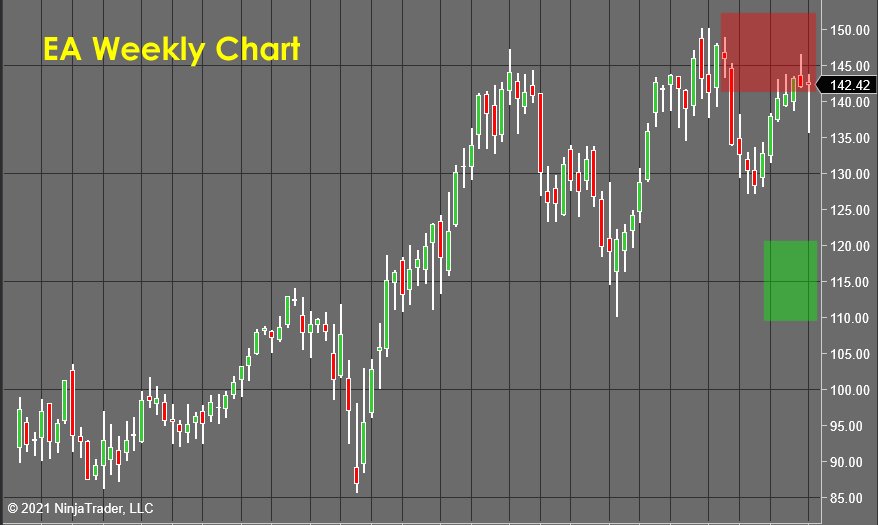 Price tanked early in the week to break down below the recent daily lows around $140, then zipped back higher as a correction formed.

Get Our Stock of the Week

Uncover the most undervalued and unappreciated stocks with our free, weekly newsletter. You'll get a new stock analysis every Tuesday!

This new position opportunity is considered attractive as a short anyplace within the red zone, with stop losses set above that area.

My forecast would be for the price to drop down to test the area indicated in green near the $120 per share area. 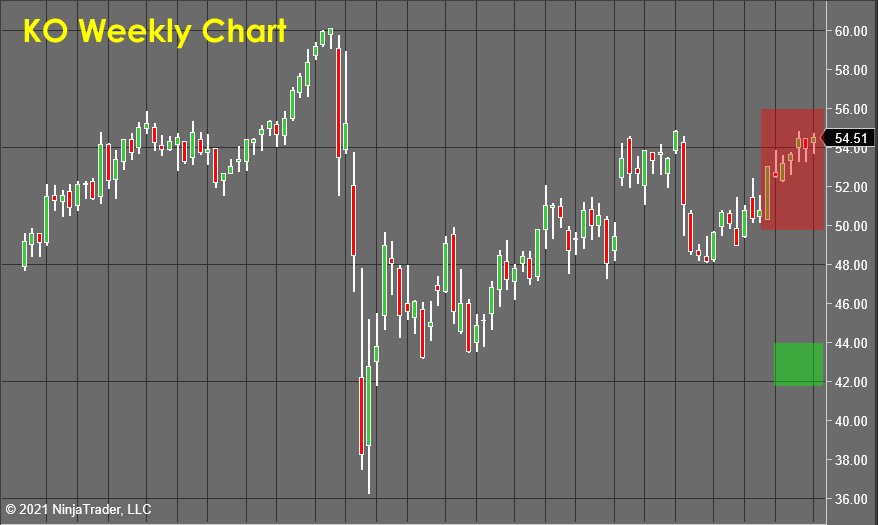 Coca-Cola (KO) continues to frustrate as it hovers and refuses to either break up above the high of the red zone, thus triggering stop losses, or finally turn lower and begin producing profits.

The odds for this trade’s success have plummeted this week, and this puts me into an interesting strategic position.

I always think about the math of trading in terms of $1,000 risk “units”. If I scratch the trade for nonperformance, it would book a loss of about $800 for every $1,000 of risk put into this position.

That’s not saving much, and while the odds for a profitable outcome are diminishing…KO is still bearishly biased and could pull it out.

So the math is this: Do I save a little money and book the loss, or do I let it work itself out?

So, therefore, as long as I have confidence that the odds for success of this trade are better than 17% I should stay in! (This is a lot like calculating “pot odds” in a poker game to determine whether the advantaged play is to bet or fold..) 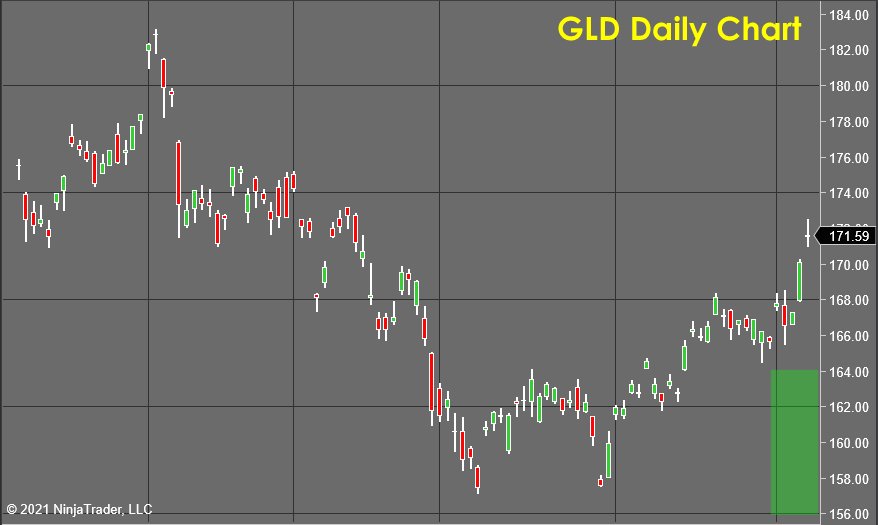 After Gold, (analyzed here using GLD) finished working out its textbook “breakout/retest” pattern, it chopped sideways for a few days, then launched higher like a rocket!

This price behavior confirmed the recent lows as a significant event and support created by last week’s correction is the new “floor as this very positive price action builds up the bull’s confidence and energy.

I am excited to hold the wiggles and let this position work itself out over the next few months! 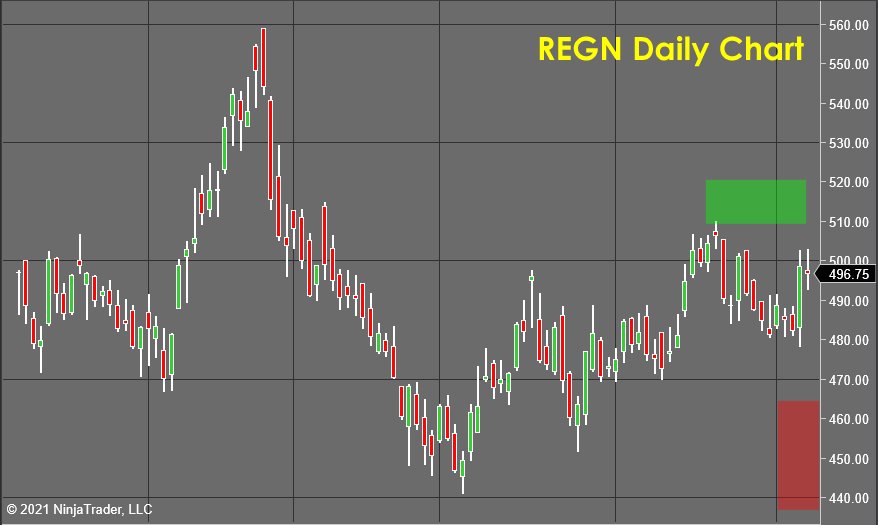 Regeneron Pharmaceuticals (REGN) rallied well but fell just short of the $510 I had for this week. This trade is taking its time and if it fails to break out this week it will likely correct back down to “wash out” the $480 lows.

Having already locked in gains, this trade is in a “no-lose” position, so my inclination is to let it go and force it to stop itself out... However, I have such a nice round of positions I’m managing right now so I believe that the buying power would be better deployed someplace else.

I’ll consider this trade closed out for a tactical exit by the end of Monday’s session...

The Eurodollar vs The US Dollar 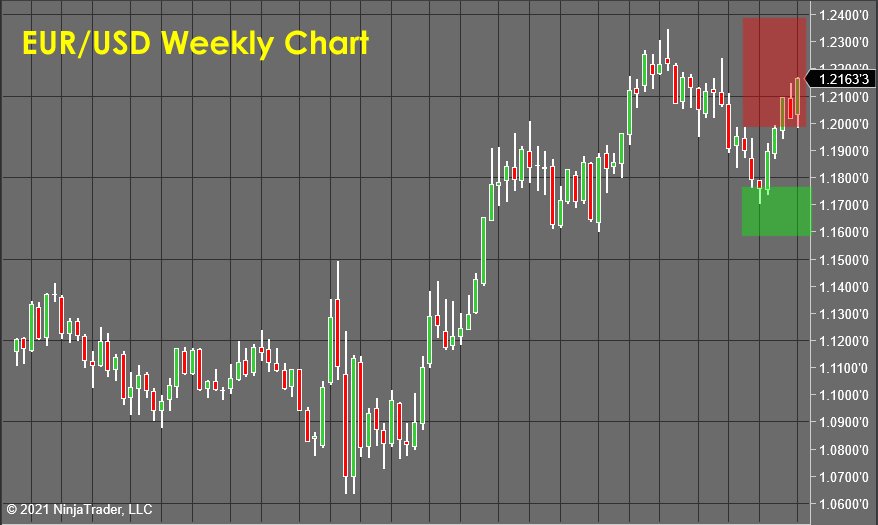 The EUR/USD currency pair formed a textbook head and shoulders reversal pattern last week. Price fell below that weekly bars lows to trigger a traditional entry, then squeezed hard back up to new highs.

The proprietary tools I use for measuring supply/demand so that I can accurately forecast prices show that this bullish move is not well sponsored. This implies that the rally will quickly fail and prices will then go back into the bearish side.

Next week’s action will tell a lot. If we see a strong rejection of this squeeze move next week, it would confirm the measurements I am seeing today and I would be confident that the bearish forces will regain their dominance.

In the meantime, this week’s squeeze offers a nice chance for some short exposure with a multi-month time horizon for anybody who missed the entry last week. This short is considered attractive anywhere within the red zone and should produce at minimum a retest of the lows near 1.1700.