First off, the term altcoin is a portmanteau of two words, “alternative” and “coins.”

But don’t let that throw you: Alternative is the keyword here.

Alternative to what? Well, you guessed it: Bitcoin.

That’s right: Altcoins are all cryptocurrencies, except Bitcoin.

But that answer just gets us started.

The World of Altcoins

That are, well, pretty much anything.

Fact is, the world of Altcoins includes coins that boast just about any feature you can think of, so long as it can be developed in a blockchain environment.

And, of course, so long as the coin is not Bitcoin.

Altcoins include coins that function as stores of value (like Bitcoin), that have computational capabilities (like Ethereum (ETH)), that enable business on decentralized (defi) financial networks (like Uniswap (UNI)), that are more stable than other cryptocurrencies (like Tether (USDT)), and that have interoperability features (like Cosmos (ATOM)).

And that’s just a shortlist of what Altcoins can do.

And to me, some of these things that Altcoins are doing are pretty cool.

And the number of coins doing all these really cool things is huge. At last count, the number of cryptocurrencies out there was 10,852. Take away one spot for Bitcoin, and that leaves a mind-boggling 10,851 Altcoins in the market today.

How do I Find the Right Altcoin?

So, how do you begin to sift through all those Altcoins to get a handle on which ones are worth taking a look at?

But if you’ve been following these articles on cryptocurrencies, that warning should be nothing new: The fact is the cryptocurrency space as a whole is loaded with risk, high-flying valuations, and bone-crushing pullbacks. And that includes all Altcoins.

Still, don’t let that intimidate you.

If you’ve been following our articles here, we’ve taken a look at some solid Altcoins out there. Ethereum (ETH) would certainly make it to the top of my list. The coin’s computational prowess and market dominations are great features.

I’ve also talked about Cosmos (ATOM). It boasts interoperability features that help different blockchains talk with one another. And its development aspects are super-interesting.

But here’s the thing: Of the 10K plus coins out there, the vast majority aren’t going to amount to much. Some won’t be able to do what they claim they can and will die in the development stage. Others will fulfill some of their promise but won’t be widely adopted. And still, others are either out-and-out scams or pump-and-dump schemes.

So, when you take a look at Altcoins, stick to the top 20 or so in market cap. That translates to a market cap floor of about $5 billion. That’s not a guarantee, of course, that those coins will work in the long term. But it is an indication of some commitment by the marketplace. And that makes it a good place to start.

Beware: Altcoins are Dominated by Bitcoin

Remember that of the 10K or so cryptocurrencies, they all qualified as Altcoins, except one: Bitcoin. As a result, Bitcoin is the lone non-Altcoin on the market compared to thousands and thousands of others.

But don’t let that fool you. Bitcoin may just be one voice among thousands of others, but its voice is very, very loud.

So loud, in fact, that at a ratio of 10K+ to one, Bitcoin still dominates the marketplace. Take a look... 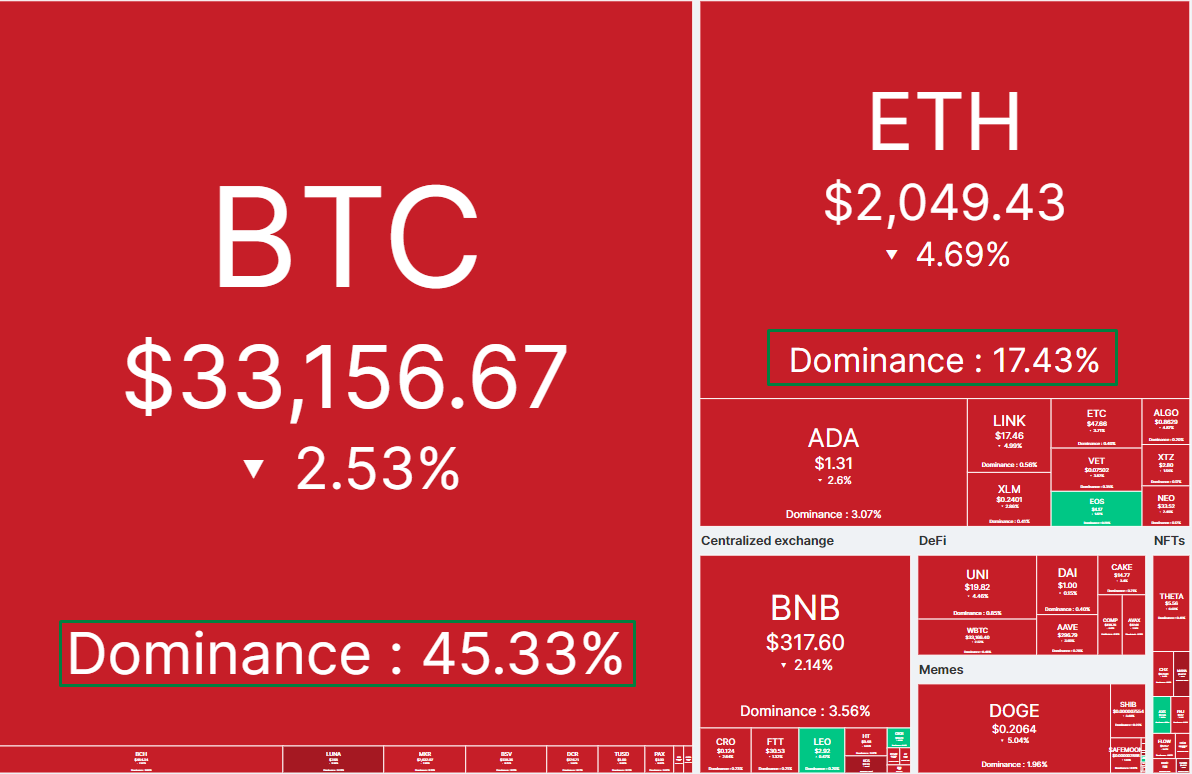 As you can see from this Heat Map of the cryptocurrency market, Bitcoin is by far the most dominant player, with a staggering 45% of the entire market. Ethereum is a distant second with 17% of the market. And third place Binance Coin (BNB) controls just 2%.

Why use a cryptocurrency market Heat Map? Because it gives you a two-dimensional look at what the biggest players are doing based on recent prices. The bigger the player, the bigger the square or rectangle on the Heat Map. The Heat Map also shows a lot of red. That means that the vast majority of the biggest cryptocurrencies are moving in lock-step together.

Does that mean if you want to be in cryptocurrencies, you should just buy Bitcoin and be done with it? That’s an idea. But the more important thing to understand is that if you buy an Altcoin – even a very good one – realize that if everyone starts selling Bitcoin, your cherished altcoin is likely to take a hit, justified or not.

3 thoughts on “What You Don't Know About Altcoins”