Let's get right to it, if you invest long enough, you're going to have to deal with markets behaving in knee-jerk ways, and the recent selloff is Bitcoin (BTC) fits the bill to a T.

The fact is Bitcoin, along with the entire crypto asset class, got pummeled because the Fed signaled that they're in the mood to raise interest rates sooner rather than later. This outlook, which came from the Fed's minutes of the December meeting, wasn't what the markets expected. And we all know that when the markets don't get what they expect, they take their toys, go home, and sell pretty much everything in sight.

So, what juicy secret did the minutes reveal? As with most Fed announcements, precise forecasts are hard to glean. But the gist was that the Fed would raise rates sooner rather than later.

But if you think that it was just crypto that took it on the chin, think again. This more hawkish view on interest rates also hammered stocks, especially tech stocks.

So, why don't markets like higher rates? The general wisdom goes like this: Higher rates have both negative and positive impacts on the markets.

On the negative side, higher rates mean it's more costly for factories and companies to borrow capital. And that can put the squeeze on capital investment, output expansion, and future plans. That, in turn, can hurt sales and profits. Plus, higher rates give companies pause when they go out to hire new people, which in turn could hurt consumer spending.

Higher rates can also have a similar effect on consumers. They can make it more costly to buy homes, invest in durable goods like cars, and in general, spend money. Like companies, higher rates will make consumers think twice before they go out and spend money.

On the positive side, the deceleration effect that higher rates have on companies and consumers also means that producers will have a tough time raising their prices for the goods they produce. And that can have a positive effect on price inflation, meaning prices are likely headed down if interest rates go up.

And there's no doubt about it: Keeping prices down and inflation in check is the Fed's number one job. And rightly so: Run-away inflation is one of the worst things that monetary policy managers can imagine. It can gut entire economies, drive prices through the roof, clobber businesses and consumers, and make currencies worthless.

(By the way, when you hear pundits talk about the Fed shrinking its balance sheet, it means that they will sell bonds to banks in the system via their open market operations. This has an effect of withdrawing cash from the economy, which, like the effect of higher rates, makes money less available, which in turn can slow investment and spending.) 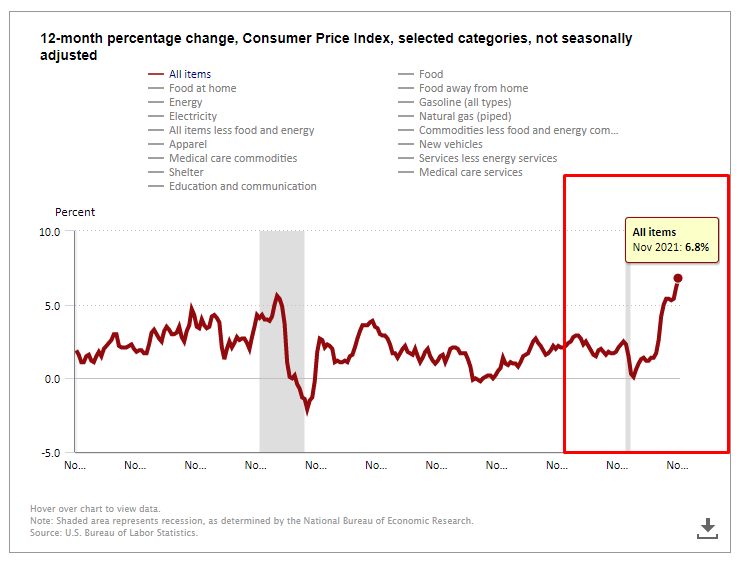 As you can see from this chart, inflation is worrisome. So, it's no surprise that rates are likely headed up.

One last thing: I'm not shocked that the recent selloff was highlighted by Bitcoin, crypto, stocks, and tech. And that's because the prospect of higher interest rates tends to make riskier assets like these less attractive. Why? Because higher interest rates can mean higher rates for bonds and other interest-bearing instruments. Since these tend to have lower risk profiles, investors figure riskier assets aren't as great as they were before rates jumped.

But alongside this explanation is the fact that what's happened in the markets boils down to a knee-jerk reaction. The markets can't stand uncertainty. And since the markets don't know exactly what interest rate hikes will mean for companies and consumers, they just press the panic button and throw the baby out with the bathwater.

As an investor, I always look at the fundamental underpinnings of the economy. And my calculus tells me, for the most part, the economy is humming along nicely. Interest rates are still relatively low, corporate profits are through the roof, the jobless rate is down, and GDP is up. Plus, the economy appears to be able to manage the covid health crisis, no matter how difficult it is for the average person, especially front-line workers.

So, feel free to mark my words: As the markets continue to digest these latest interest rate uncertainties, investors will revert back to the median and once again recognize the solid underpinnings of the markets. The uncertainty about higher interest rate effects will also be consumed and priced in as we go forward.

It won't happen overnight. So, as always, take a long-term view when it comes to investing. And that especially holds true for crypto. Nothing fundamentally has changed. It's just a matter of holding tight until this episode gets behind us. And remember to devote no more than 1% to 2% of your portfolio to crypto!

One thought on “The Truth Behind The Bitcoin Sell-Off”