It’s been a mixed Q2 Earnings Season for the Gold Miners Index (GDX), with most producers posting solid operational results but revising cost guidance higher to reflect inflationary pressures. These pressures are related to fuel (diesel) and labor inflation, partially related to a tight labor market in prolific mining regions.

However, a few companies have bucked the trend, and others are in a position to claw back any margin declines experienced this year. These miners are the ones to own, and due to depressed sentiment in the sector, they’re trading at large discounts to their net asset value, with two being prime takeover targets.

Alamos Gold (AGI) is a mid-cap gold producer operating in Mexico and Ontario, Canada, that has three mines and a development project in Manitoba.

The company was one of the few miners not to raise its cost guidance this year due to diesel hedges and operating high-grade underground mines. Notably, it’s also tracking nicely against production guidance, explaining the stock’s sharp rally following its Q2 results.

However, the real news for AGI was the release of its Island Gold Phase 3+ Study, which has outlined an operation capable of producing over 270,000 ounces per year at all-in sustaining costs below $600/oz.

This would make its Island Gold Mine (130,000 ounces per annum at ~$900/oz currently) one of the lowest-cost mines globally and a top-5 in Canada from a profitability standpoint. I believe this is a game-changer, but due to the poor sentiment sector-wide, the stock has not enjoyed the premium it should for this news.

Assuming the expansion is successful and the company can receive permits for its Lynn Lake Mine in Manitoba, Alamos has a path to become a 750,000-ounce producer at sub $850/oz costs by FY2027 a major upgrade from 460,000 ounces at $1,200/oz currently.

This should command a large premium to net asset value ($11.00 per share), yet it trades at a discount at a share price of $7.40, making this a rare opportunity to pick the stock up on sale.

So, from a growth/value standpoint, AGI is a must-own name if one is looking for gold exposure.

The second name worth keeping a close eye on is Karora Resources (KRRGF), a small-cap gold producer operating two mines in Western Australia.

While the region has seen cost escalations due to a labor market that impacted Karora’s Q1 results, the company should have a much stronger second half of the year. From a bigger picture standpoint, it has paved a path toward 90% production growth by 2026.

During Q1, Karora produced 30,000 ounces of gold at all-in sustaining costs of $1,396/oz, translating to a significant margin hit.

However, this figure had $300/oz in COVID-19-related costs, and the company will benefit from increased productivity and higher grades in H2 2022. That said, even with H2 improvements, its FY2022 costs will likely come in at or above $1,040/oz.

While some investors might be discouraged by the increase in costs year-over-year, it’s important to note that Karora’s plans to nearly double annual production with a second decline will lead to a meaningful drop in unit costs. This will be driven by higher throughput and additional nickel production, with the latter translating to higher by-product credits.

Despite this rare combination of production growth and margin expansion looking out to 2024, Karora trades at a market cap of $430 million, leaving the stock trading at a 60% discount to its estimated net asset value.

The final name on the list is Skeena Resources (SKE), a small-cap gold developer that’s working to restart one of the highest-grade gold mines globally.

Since SKE began work on the Eskay Creek Project in 2018, it has had considerable exploration success. This is evidenced by the project now being home to nearly 6.0 million gold-equivalent ounces, with Skeena envisioning an open-pit mine with modest upfront capital and operating costs below $700/oz.

Once in production (the goal is for late 2025), this would make Eskay Creek one of the lowest-cost gold mines globally, commanding a premium relative to its peers.

So, why did the previous operator halt mining operations?

With gold prices under pressure in 2008 and less extensive infrastructure in the area, the previous operator was forced to focus solely on the material above 12 grams per tonne of gold. There’s only so much gold at these grades that a company can uncover.

However, due to these ultra-high cut-off grades, the operator left behind millions of tonnes of 4.0 gram per tonne material, which Skeena is after.

A mine plan reliant on these much lower grades is made possible due to the new infrastructure that includes a 287kV Northwest Transmission Line and the Volcano Creek Hydroelectric Power Station that’s 7 kilometers from the site and much higher gold prices ($1,700/oz v. $750/oz). 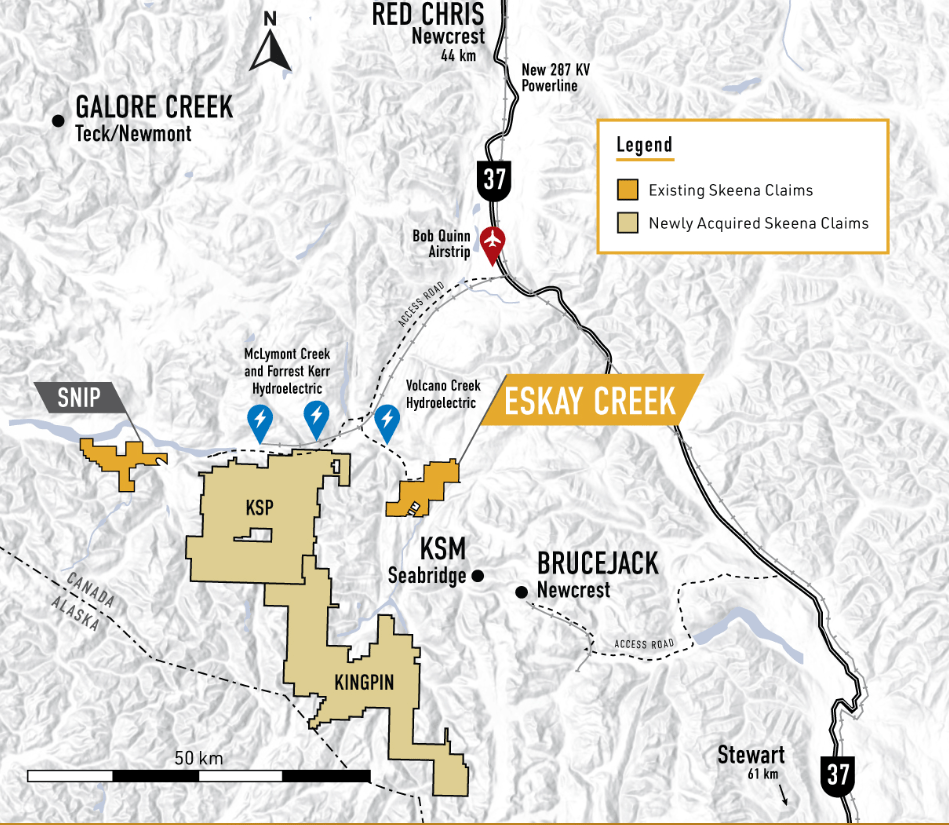 Based on the current mine plan and after factoring in inflationary pressures, I have estimated a net asset value of $970 million for Skeena’s Eskay Creek Project, plus an additional $300 million for exploration upside (ounces not yet in the mine plan), and its high-grade Snip Project as well as additional properties in the Golden Triangle of British Columbia.

Compared to Skeena’s market cap of ~$430 million, Skeena trades at a fraction of fair value. In an environment where producers are seeing rising costs, Skeena is a very attractive takeover target, given that its projected operating costs are more than 40% below the industry average ($1,230/oz).

Obviously, there’s no guarantee that Skeena will be acquired, but producers are flush with cash and looking at ways to claw back lost margins related to inflationary pressures. In my view, this increases the probability of Skeena being taken over within the next year, and I would estimate a bid above $9.00 per share if a suitor wanted to make a serious offer.

This translates to a 70% upside from current levels, and producers could use their strong balance sheets to get this deal done to avoid share dilution. So, with more than 100% long-term upside if Skeena goes it alone and short-term upside in a takeover scenario, this 65% decline in SKE is a gift.

Gold stocks are a volatile group to invest in, but if one buys the best when they’re hated, they can generate sizeable returns. In my view, Alamos, Karora, and Skeena are three of the best, and they’re now trading at their most attractive valuations since March 2020. Hence, I have recently started positions in all three names.

Disclaimer: This article is the opinion of the contributor themselves. Taylor Dart is not a Registered Investment Advisor or Financial Planner. This writing is for informational purposes only. It does not constitute an offer to sell, a solicitation to buy, or a recommendation regarding any securities transaction. The information contained in this writing should not be construed as financial or investment advice on any subject matter. Taylor Dart expressly disclaims all liability in respect to actions taken based on any or all of the information in this writing. Given the volatility in the precious metals sector, position sizing is critical, so when buying small-cap precious metals stocks, position sizes should be limited to 5% or less of one's portfolio.