It’s been a volatile year for the major market averages, and the Nasdaq Composite (COMPQ) remains down 28% for the year and on track for its worst annual decline since 2008.

The difference this time is that it’s coming off a multi-year win streak and a more than decade-long bull market, making the current sell-off look more similar to 2000 than the 2008/2009 lows.

That said, for investors willing to look outside of the traditional FAANG names that have massively outperformed for years, there are always opportunities to hunt down alpha. This update will look at two general market names trading at deep discounts to fair value.

Builders FirstSource (BLDR) is the largest supplier of structural building products, value-added components, and services to the professional market for the single-family and multi-family construction/repair/remodeling market in the United States.

The company has ~560 distribution/manufacturing locations across 42 states and boasts a market cap of $9.7BB.

Unfortunately, though, with the housing market teetering on a recession with new and existing home sales down sharply, investors have become worried about buildings products name, and Builders FirstSource hasn’t been immune from this anxiety despite continuing to put up phenomenal results.

Notably, these results were lapping already difficult comparisons from the year-ago period, with Q3 2021 annual EPS up 308% in the year-ago period. The strong growth in earnings was driven by ~20% growth in its higher-margin value-added products combined with aggressive share repurchases, repurchasing $2.0BB in shares to date (~30% of common shares).

However, Builders FirstSource’s core business is strong with growth in its key segments (core organic sales in Value-Added Products up 20%, Repair, Remodel & Other up over 30%), and the stock is significantly undervalued. END_OF_DOCUMENT_TOKEN_TO_BE_REPLACED

Following a brutal two years for the Gold Miners Index (GDX), the sector has begun to perk up recently, advancing more than 20% off its lows to new 50-day highs.

This recovery can be attributed to the recent rally in gold back above the psychological $1,750/oz level and the fact that many miners had overshot to the downside during this bear market. In fact, many were trading at their most attractive valuations since 2018, when the gold price was hovering below $1,250/oz, and they were much less profitable.

Given the steep decline in the sector, several gold miners are trading at deep discounts to fair value.

In this update, we’ll look at two more attractive opportunities in the gold sector. Not only do these two companies have industry-leading growth profiles, but they have been beaten up sufficiently due to negative sentiment sector-wide that they’re offering considerable margins of safety at current levels.

Osisko Gold Royalties (OR) is a $2.33BB market cap royalty/streaming company in the gold sector, giving it a very low-risk business model. This is because the company generates revenue and cash flow from royalties and streams that it has purchased from developers and producers in exchange for helping them fund the construction or expansions of their projects/operations.

The result is that Osisko does not have to pay for sustaining capital to maintain these mines, it does not have to pay growth capital to expand these mines, and it is not subject to inflationary pressures if we see rising labor, fuel, explosives, or cyanide costs. Given this attractive business model, the company has reported year-to-date cash margins of 93% and 92% in its most recent quarter. 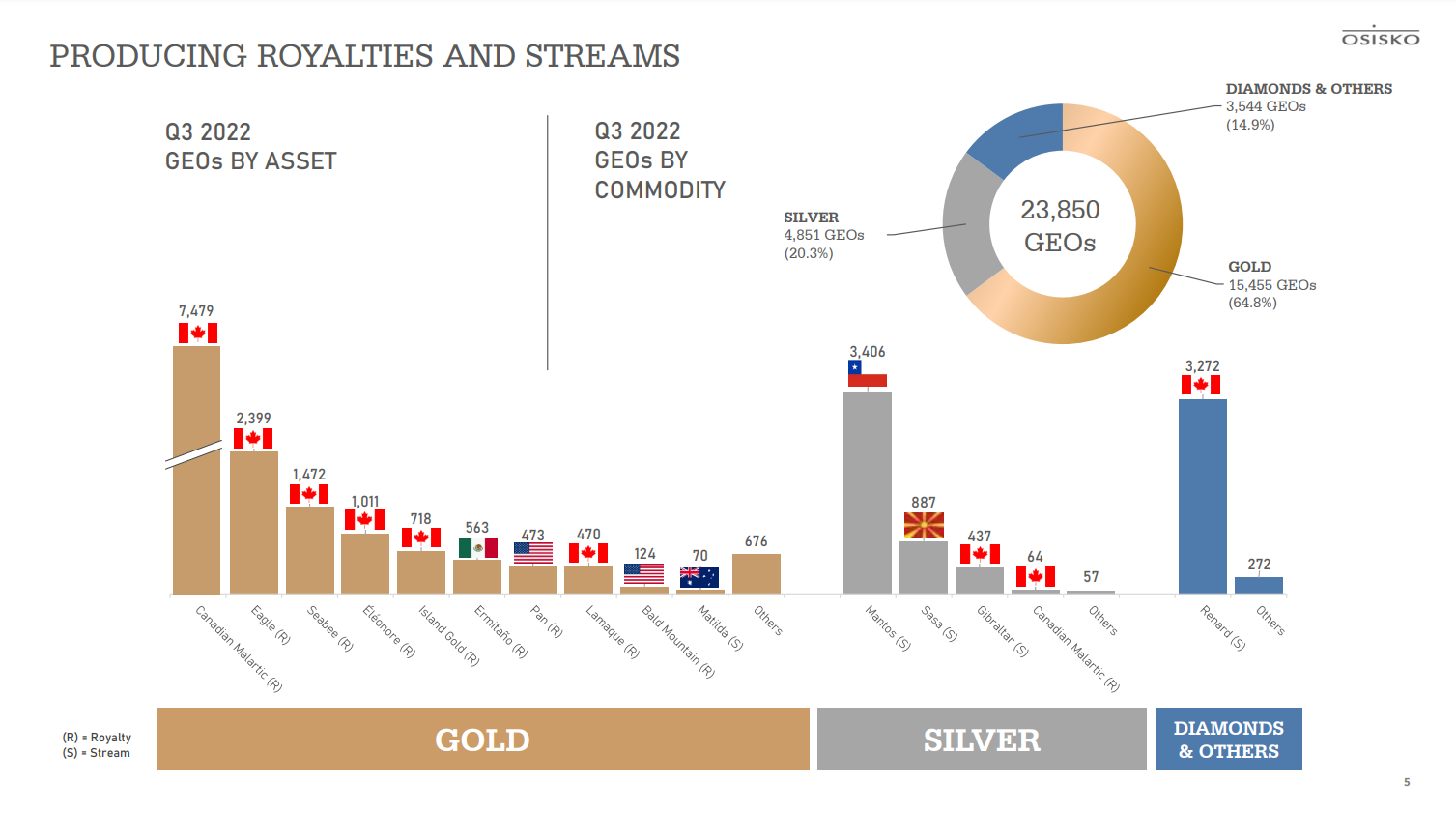 This has made the sector fertile ground for new investment ideas relative to other sectors. Still, with mining being a complex business and the gold price being quite volatile, the key to outperformance when dabbling in the sector is to own the highest-quality names.

In this update, we’ll look at two of the largest gold miners globally and determine which is the most attractive name from an investment standpoint - Agnico Eagle Mines (AEM) or Newmont Corporation (NEM).

Newmont and Agnico Eagle Mines (“Agnico Eagle”) share very similar business models, given that they are two of the world’s largest gold producers that receive over 90% of their revenue from gold with limited contributions from other metals.

In Newmont’s case, it is the world’s largest gold producer, with 15 operating mines in Africa, North America, South America, and Australia, and annual production of 6.0 million ounces of gold (+ 1.3 million additional gold-equivalent ounces).

Meanwhile, Agnico Eagle has 13 mines across Canada, Finland, Australia, and Mexico and expects to produce 3.4 million ounces of gold this year.

It is also worth noting that while Agnico Eagle has a smaller production profile and slightly less diversification, its jurisdictional profile is superior, with 95% of future production coming from top-rated mining jurisdictions.

That said, Newmont wins by a hair in this category for investors looking for a global producer with diversity. END_OF_DOCUMENT_TOKEN_TO_BE_REPLACED

It’s been a challenging two years for investors in the gold space, with the metals making no progress since Q3 2020 and the Gold Miners Index (GDX) suffering a 52% decline from its highs.

This violent bear market can be attributed to significant margin compression for most gold producers, with them being hit by inflationary pressures (fuel, steel, cyanide, labor) and the impact of a lower gold price on sales. 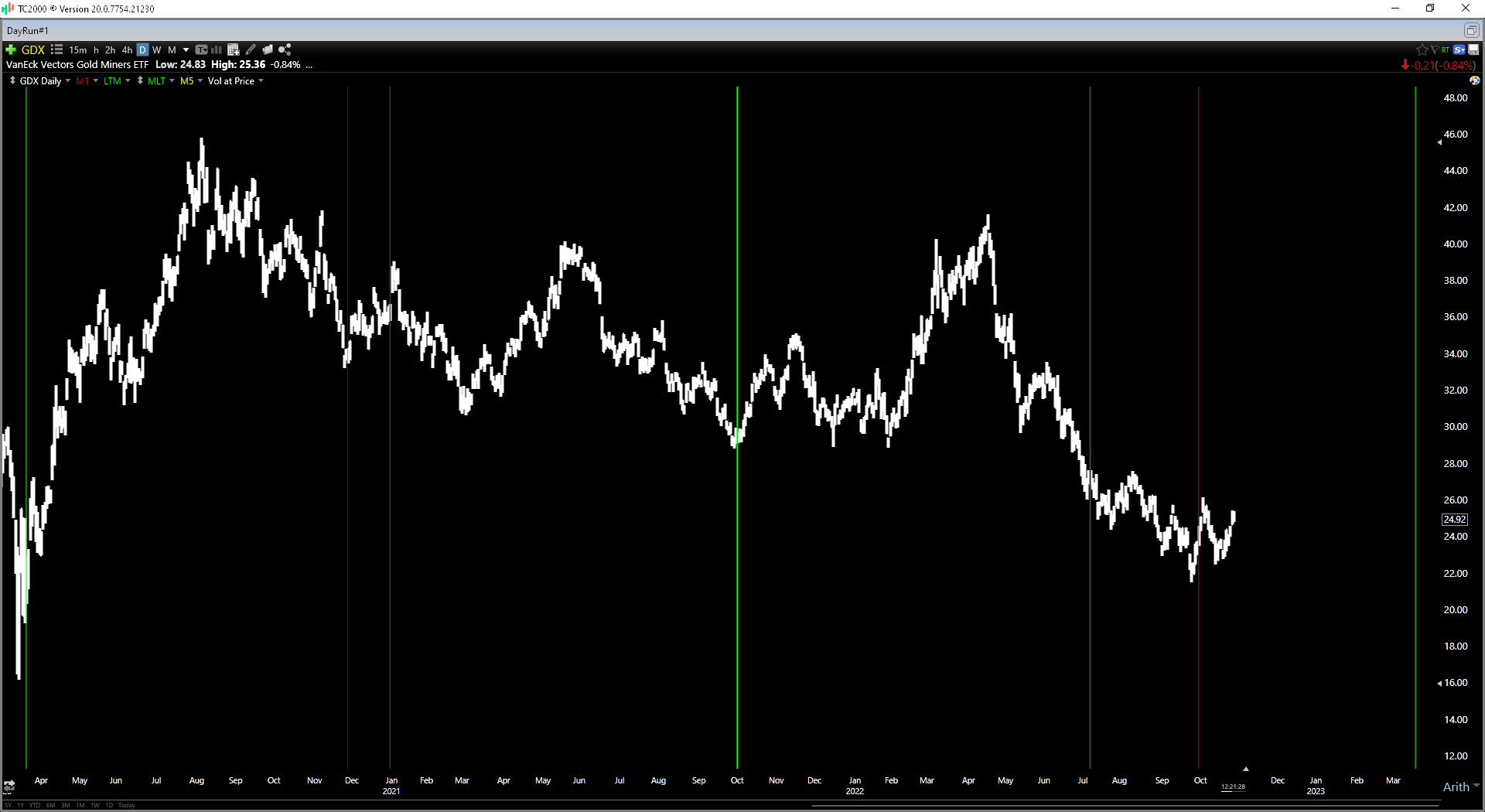 On the surface, this might not seem like a very attractive investment thesis given that gold producers are price-takers, gold continues to trend lower, and they’re already seeing margin compression at $1,660/oz.

However, the 52% correction in the GDX has left sector-wide valuations at their lowest levels since 2018, when all-in-sustaining cost margins were at $200/oz, nowhere near the $500/oz margins currently.

Hence, I believe this negativity is more than priced into the sector, especially if gold can find a floor near $1,600/oz, which looks likely given that we have extreme pessimism.

That said, not all miners are created equal, so it’s essential to focus on quality and those names bucking the margin trend. In this update, we’ll look at two names trading at deep discounts to net asset value that have outstanding business models: END_OF_DOCUMENT_TOKEN_TO_BE_REPLACED

It’s been a volatile year for the major market averages, and the S&P-500 (SPY) has now corrected over 27% from its highs, suggesting we’ve seen the majority of the downside short-term.

This is based on the average recessionary bear market coming in at 34% and the S&P-500 now satisfying 80% of the average decline’s magnitude.

One of the most beaten-up areas of the market has been growth stocks, and with elevated pessimism finally increasing the likelihood of a short-term market bottom, this is the ideal time to be hunting for new ideas.

Unfortunately, not all stocks are created equal. While many growth stocks might be oversold, those still posting net losses per share and carrying high debt levels are extremely risky in a rising-rate environment.

However, for investors willing to dig through the rubble, two names stand out as extremely attractive, trading at significant discounts to fair value despite boasting strong earnings trends. In this update, we’ll look at two stocks that are solid buy-the-dip candidates:

This has been accomplished by industry-leading same-store sales growth rates and continued unit growth (73 new stores opened), which is supported by the company’s continuously improving unit economics. For example, the company’s average sales per square foot have improved from a prior target of $170/square foot to over $400/square foot, increasing its payback period from three years to one year for new stores.

At the same time as sales have continued to increase at double-digit levels and it’s grown its store count to 330, the company has enjoyed growth in exclusive brand penetration, providing a significant boost to annual earnings per share.

This is because its private-label brands carry much higher margins, allowing BOOT to nearly quadruple annual EPS from FY2020 to FY2022 ($6.18 vs. $1.55). These are phenomenal growth rates, and with plans to grow its store count by over 12% this year, this growth story is still in its early innings.

Unfortunately, the stock has been crushed year-to-date (down 56%) due to the negative sentiment for the Retail Sector (XRT) and the company’s lukewarm comments in fiscal Q2 2023 guidance. END_OF_DOCUMENT_TOKEN_TO_BE_REPLACED