Cannabis has emerged as a big winner in the 2020 U.S. presidential election. All five states that voted on cannabis legalization passed their ballot measures. That list includes:

This is another big step forward for the U.S. cannabis industry.

33 states have already legalized medical or recreational cannabis. Adding five more states to the mix will add billions in annual sales. The growing green wave has analysts predicting enormous growth for the U.S. industry in the next five years.

Here are some more details from mjbizdaily.com.

Retail sales of medical and recreational cannabis in the United States are on pace to eclipse $15 billion by the end of 2020, an increase of approximately 40% over 2019 sales figures, according to exclusive projections from the 2020 edition of the Marijuana Business Factbook.

Total U.S. sales could rise as high as $37 billion by 2024, according to exclusive projections from the latest Factbook, which was released Monday at MJBizConNEXT Direct. 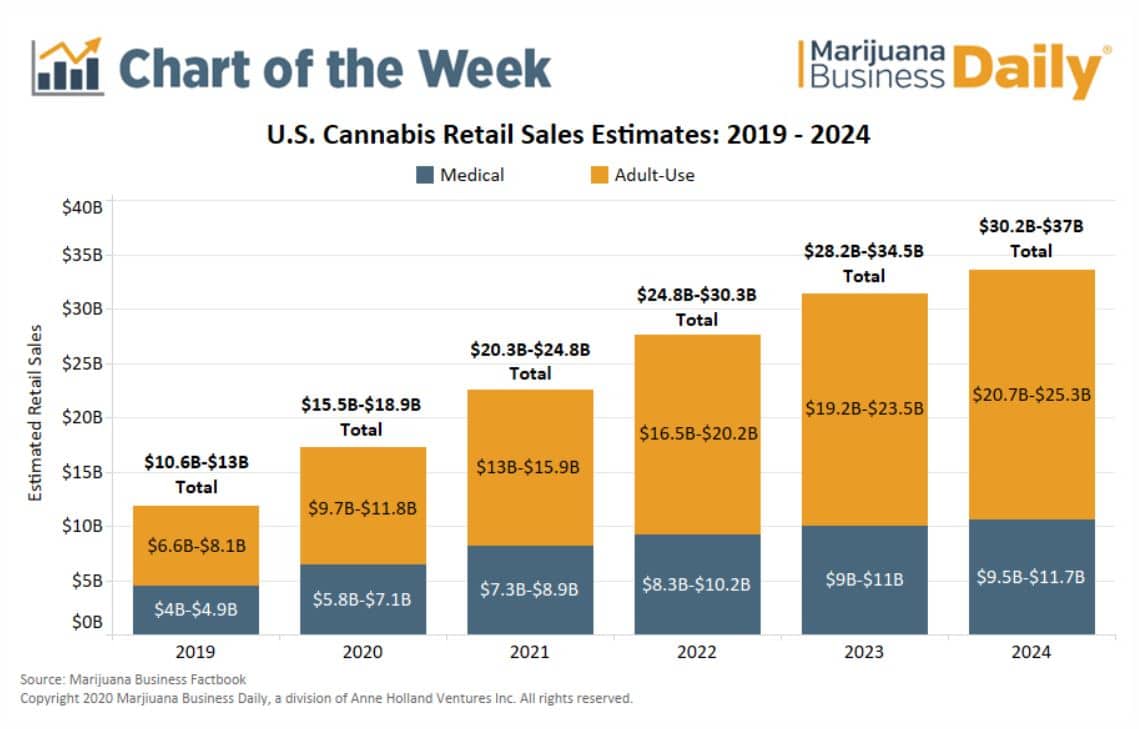 While the entire sector stands to benefit from this explosive growth, a popular group of early industry leaders could benefit the most. END_OF_DOCUMENT_TOKEN_TO_BE_REPLACED

Stock IPOs are one of Wall Street’s most exciting events. When shares of a company begin trading on the stock exchange, investors get their first shot to invest in an exciting, young company. These early investments can also turn out to be very profitable. That is particularly true for the cannabis industry.

Although there is plenty of risk in cannabis stock IPOs, many have turned into profit gushers in the last few years.

One example is Cresco Labs (CL, CRLBF). Cresco is one of the largest cannabis companies in the U.S. This stock is a direct play on Illinois legalizing recreational cannabis. Since going public on the Canadian Securities Exchange in December, shares have almost doubled.

Two new cannabis IPOs just began trading this week. That means that investors can now buy shares in these companies and do so ahead of the curve.

One is a play on California’s high-growth cannabis market. END_OF_DOCUMENT_TOKEN_TO_BE_REPLACED

Illinois continues to advance towards its goal to legalize recreational cannabis in 2019.

JB Pritzker, a major advocate of legalization, is leading the big push toward legalization. It was a staple of his campaign and now that he’s in office, Pritzker says his goal is to legalize recreational cannabis as quickly as possible.

Legislators have been busy working on a bill to move legalization down the pipeline, and it sounds like they are making a lot of progress.

Here’s an update that comes from the Belleville News-Democrat.

State Sen. Heather Steans and state Rep. Kelly Cassidy, both Chicago Democrats who have been working on marijuana legislation for two years, said they wouldn’t rush the process on behalf of revenue.

“Assuming that we want to have some revenue, I think we’d like to pass it by the end of May,” Steans said. “But I think both Representative Cassidy and I have been very clear that the revenue is not what is motivating or should drive this legislation, but obviously it’s a side benefit piece that can also come.”

Here’s where things get even more interesting. END_OF_DOCUMENT_TOKEN_TO_BE_REPLACED

Chicago just took a big step toward becoming the cannabis capital of the Midwest. Not only would that be good for the broader US cannabis industry – it would be great news for two young and promising cannabis companies operating a string of cultivation facilities and dispensaries all across Chicago and Illinois.

Pritzker is a major advocate of legalization. It was a staple of his campaign and now that he has won Pritzker says his goal is to legalize recreational cannabis as quickly as possible.

According to a recent report from the Chicago Tribune, Illinois legislators are expected to introduce a bill as early as January that could be passed by May.

Sponsors plan to introduce a new legalization bill in January and hope to get it passed before the session ends in May. The proposed measure would allow the commercial sale and regulation of marijuana, similar to alcohol, for adults 21 and over. There would probably be a six-month waiting period for officials to draw up rules before issuing licenses for growing and selling it. Sponsors say existing medical marijuana companies would likely get the first crack at sales.