This morning I actually got excited for a split second when the silver price shot northward to $15.85/oz and I almost fired off a tweet (can't believe I am actually using Twitter) saying that "Silver could easily become the Cartel's Achilles Heel" because as silver was creeping up, gold was sliding down, so these Criminal Cretins just continued to lean on gold down to $1,235/oz from $1,262/oz and the algo-bots did the rest with silver succumbing to the intervention/manipulation and now sits at $15.37/oz, down $0.23 instead of up $0.20. 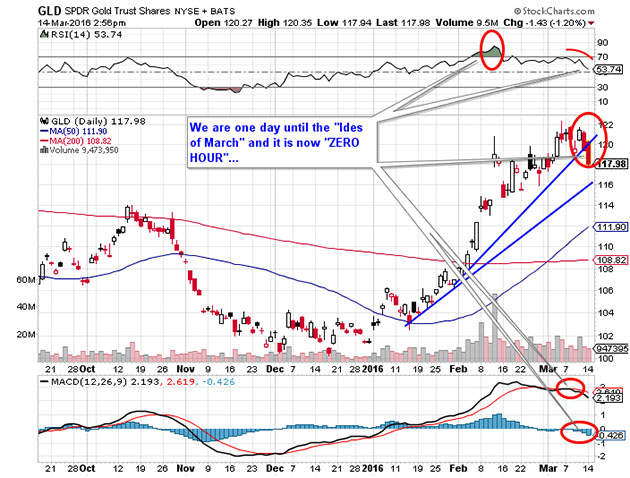 All images/charts courtesy of Michael Ballanger

The blogosphere has been abuzz since the end of PDAC last Wednesday about the impending "Melt-Up" in gold and silver prices, and when I read the litany of rationale behind the impetus for the move, I thought I was reading an old archive from Harry Schultz in 1976. All of the Keynesian diatribe nonsense that gets shoveled in front of us day in and day out is all designed to deflect attention away from this massive global exercise in currency debasement, and thus far, it has been working. Stocks are at five-week highs and the Dow is again above 17,000 with the SP 500 sporting a 20-handle while Mario Draghi talks about the European Central Bank buying every listed stock on the European bourses. The policy "errors" coupled with moral hazard has been transformed into policy "madness" and moral "lunacy" as the bankers around the planet scurry about trying anything and everything to avoid the ultimate day of reckoningsovereign insolvency. So, in order to create an aura of calm and "business as usual," the first order of execution is always "Take care of that goddam gold market!" so sure enough, after a soft-ish close to the Crimex session, the Globex geek squad decided to play tap dance through the Access Market tulips and added another $10 downside between 1:30 and 4:00 p.m. when the GLD closed for the day. END_OF_DOCUMENT_TOKEN_TO_BE_REPLACED

Since the start of January the price of Gold and Silver have risen nicely as both metals are seen as a hedge against inflation and purchasing power over time. With continued low interest rates in the U.S., the announcement of QE in the Eurozone, debt issues in Greece, and the Swiss playing games with their own currency, many investors have begun looking for safe havens.

With Gold and Silver being the most trusted safe havens by many, and gold and silver ETF's making it easy for investors to quickly get in and out of owning the metals, we are seeing some interesting actions in two ETF's that actually own bullion itself. The SPDR Gold Shares (GLD) ETF owns actual gold bullion while the iShares Silver Trust (SLV) ETF owns actual silver bullion. The fact that these ETF's own actual bullion is key because their underlying assets are based on the price the metals are trading for at any given time, not futures contracts, miners or any other way to play the metals.

As it would be expected, with what is happening around the world, these ETF's have risen substantially year-to-date; iShares Silver Trust is up 9.83% while SPDR Gold Shares has climbed 8.69%. These move come while the S&P 500 has actually lost 3.1% year-to-date.

But here is what is interesting about these moves; net flows, or the amount of cash moving in or out of these funds are wildly different. iShares Silver Trust ETF has seen $175 million flow out of the fund since January 1 while the SPDR Gold ETF has seen $1.93 billion flow into the fund, according to etf.com data. So why is this happening? END_OF_DOCUMENT_TOKEN_TO_BE_REPLACED

By: Adam Fischbaum of Street Authority

I love James Bond flicks, preferably from the Sean Connery era. "Goldfinger" is one of my favorites. I am often reminded by the classic scene in which a captive James Bond is seconds away from being charred by a laser.

James Bond: "Do you expect me to talk?"

Quintessential 007: Ridiculous stunts and jams, sports cars, beautiful women and a dastardly, almost clownish villain -- in this case, one whose plan was to poison the U.S. gold supply at Fort Knox to create global financial chaos. His endgame? Simply to drive up the value of his own gold holdings. END_OF_DOCUMENT_TOKEN_TO_BE_REPLACED

Whenever I'm faced with a major change in my opinion regarding the market's long-term direction, I think of the English punk band the Clash.

In particular, the 1980s hit "Should I Stay or Should I Go" comes to mind. With apologies to the song's writers:

"Should I buy or should I sell? If I buy, there will be trouble / If I sell, it will be double."

Thinking of these altered lyrics might be a nod to being obsessed with music during my adolescence. It might also be a signal that it's time to make a change. I like to think of them as the latter. END_OF_DOCUMENT_TOKEN_TO_BE_REPLACED

Weekly Gold Report (May 13th through May 17th)

Outside of a late week Currencies surge, there were very few fireworks to report in last week’s business. This week however, may be a different story.

Thursday and Friday of last week provided some decent movement in the Dollar and Euro, but it appeared things began in the Japanese Yen, then spilled over. Throughout the last several weeks, there have been multiple attempts to push the Yen to new lows for the year, but it always seemed that somehow the plan was foiled. After the selling pressure triggered stop-orders below support, all other Currencies had to react. There was a firm rebound in the US Dollar and an inverse move in the Euro Currency. Surprisingly, the swings in the Currencies had very little impact on outside markets. In fact, most other sectors of the markets were rather stale and choppy. A Treasury Bond auction had some impact on the 30yr bonds and 10yr Notes, but there was little else in the week that provided any excitement. The same goes for the Gold Futures. Normally, traders would use the direction the Dollar or the Stock Indexes as a guide for what to expect in the Metals, but those former relationships are no longer in play on a day to day basis. END_OF_DOCUMENT_TOKEN_TO_BE_REPLACED