The Energy Information Administration updated its global supply/demand oil outlook for June. It shows total OECD oil inventories rising through November, ending the year about where they were last December. 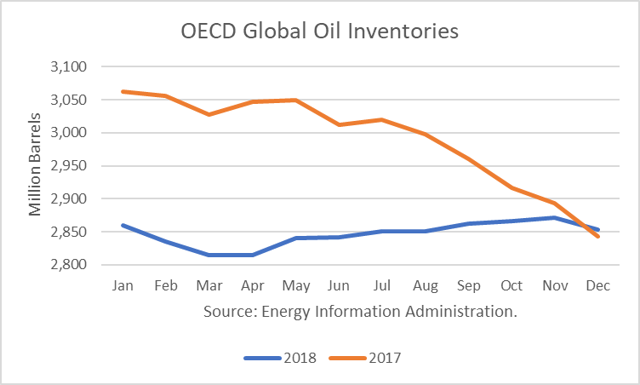 This is in contrast to the rapid decline in stocks over the second half of 2017, and that enabled oil prices to rise. If this forecast is realized, it should have a moderating impact on prices, taking away some of the risk premium embedded in futures prices.

The stock projections are based on a number of assumptions: END_OF_DOCUMENT_TOKEN_TO_BE_REPLACED

About a month ago, President Trump tweeted:

"Looks like OPEC is at it again. With record amounts of Oil all over the place, including the fully loaded ships at sea. Oil prices are artificially Very High! No good and will not be accepted!"

Perhaps Trump later made the kind of call he talked about a decade ago. In 2008, President Trump was interviewed by Jim Cramer about OPEC. In this video (starting 5:38), Trump stated:

"The biggest problem I never hear anybody talk about. I told you about it once. Every time they lower interest rates, the cartel, because I call it a cartel-- the illegal monopoly-- raises oil prices. So the monopoly, because that's what it is, a total illegal monopoly. If businesses ever formed OPEC, everybody would be put in jail. Every time a country hits oil, they are invited into the cartel. It's a disgrace. Now you have oil prices that are going to be over $100, and nobody in this country calls and says. 'Get that goddamn oil price down. You get it down. And you get it down fast.'"

"And you can do it….In the old days, our presidents used to call. We don't call anymore….If spoken to properly, those prices would come down like you wouldn't believe."
END_OF_DOCUMENT_TOKEN_TO_BE_REPLACED