Prior to his inauguration, president-elect Trump held a press conference and chimed in on his stance with regard to the pharmaceutical industry and more specifically drug pricing. Trump stated that drug companies are "getting away with murder" when speaking to the drug pricing issue that has taken center stage throughput the presidential campaign. These remarks immediately resulted in a broad sell-off across the entire biotech cohort. The iShares Nasdaq Biotechnology ETF (IBB) shed more than 2.5% or $7 per share as these comments were heard during the live broadcast. Although the political uncertainty has abated, Donald Trump has been able to single handily influence the movement of specific stocks (i.e. Lockheed Martin, Ford, Boeing, etc.) and sectors (i.e. automotive, biotechnology and healthcare). The overall healthcare umbrella has become volatile on the heels of any statement or tweet from Donald Trump and thus one can expect continued volatility until the crosshairs are directed elsewhere.

END_OF_DOCUMENT_TOKEN_TO_BE_REPLACED

There is a lot of talk today about the stock Valeant Pharmaceuticals International Inc. (NYSE:VRX) from one of its largest shareholders, Bill Ackman. You may remember Mr. Ackman from his ill-fated forays into JCPenney, Herbalife and Target. 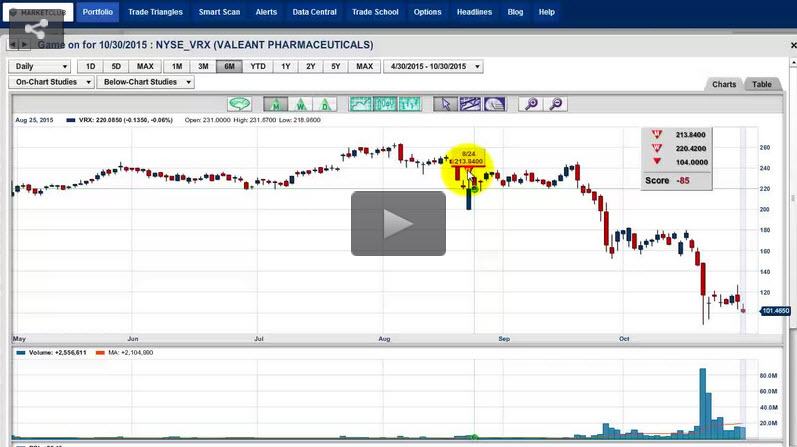 Today he is defending (via a conference call) one of his biggest investments in Canadian pharmaceutical company, Valeant. This stock was very instrumental in helping Mr. Ackman's Pershing Square Capital be the best-performing hedge fund last year, with a return of 40.4%. This year it's another story as this stock has tanked and Pershing has a reported paper loss of 1.5 billion dollars. Allegations of impropriety and finagling its sales and the way it does business have all contributed to Valeant's slide in the marketplace. END_OF_DOCUMENT_TOKEN_TO_BE_REPLACED