After three months of a painfully rangy trade, Gold Bugs were finally rewarded for their patience. Last week, after December Futures traded above $1630, the technical buy was on. Not only did the futures price test the 200 day moving average (what I suspected would be the short term target), it traded straight through before finally topping out over twenty dollars an ounce higher!  Furthermore, we begin this week with Gold printing another new high overnight.

It seemed last week that Gold prices were once again trading the fundamentals that once dictated direction. Here are a few factors that were baked into last week’s rally:

FOMC announcement that stated “many members” would support further  stimulus if the economy did not show sustainable positive results.

Potential for a major “accommodative” approach from the ECB upcoming

Reports of large bullion purchases in Europe, China, and India

This week is fairly light on economic news that would produce anything close to Ben Bernanke’s speech from Jackson Hole on Friday. From this same event in 2010, QE2 was announced and in 2011, Operation Twist was laid out. There is speculation that the FOMC’s “supportive stance” last week proves that the US will again announce a large scale idea after concluding.  All eyes will be on this announcement and traders will stand ready to act. If the meeting provides nothing new to the market, one would expect most of the anticipatory buying to turn into heavy liquidation until Europe finishes their meetings the following week.

I expect this week to stay light in volume with a choppy trade until we have a final decision from Jackson Hole, Wyoming at the end of the week. Once a decision is final, the directional trade should be back in play. 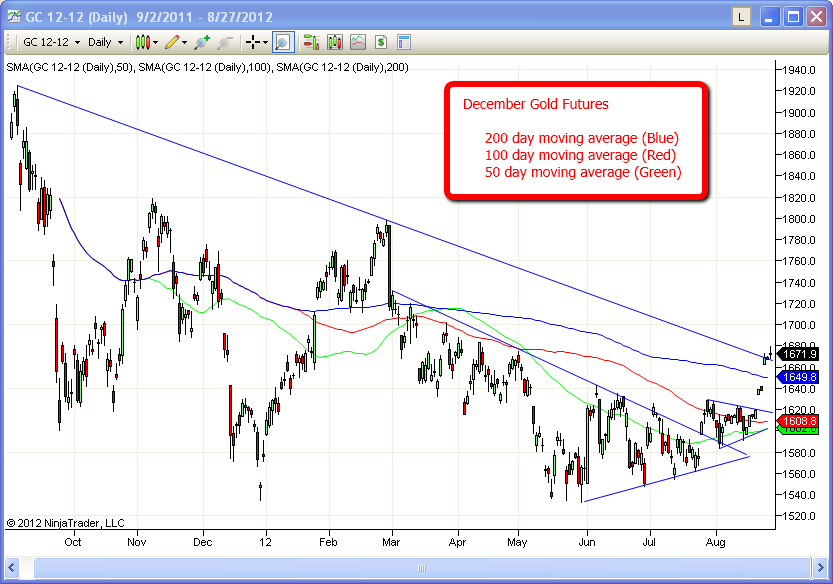 Good luck this week in the markets. And please feel free to call or email my office. As a Senior Market Strategist with Long Leaf Trading, I advise customers in the futures markets and welcome any input from fellow traders. I can be reached toll free at (888) 272-6926 or by email at [email protected]

Thank you for your interest,

4 thoughts on “Gold Chart of the Week”