Charles Dickens' well-known quote perfectly explains what's going on in the markets today. On one hand you have the bull encampment saying we're going to go higher and on the other hand you have the bears arguing that stocks are over-valued.

So which is it? 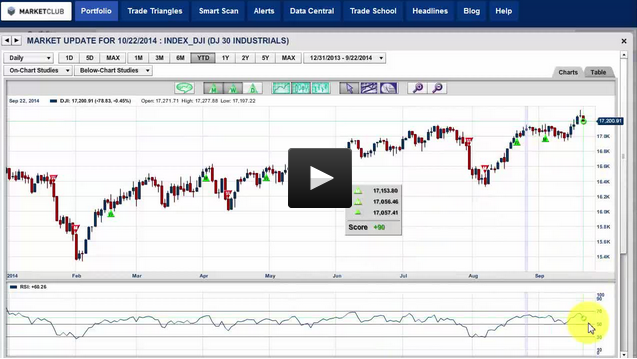 It is times like these that can drive investors crazy and frequently drives investors out of the market completely. I prefer to think of myself as a hybrid that is neither a bull nor bear, but someone who relies on the market to give them the answer to the trend.

There is no question about it, after making a low in 2009 the market has been moving up and has put in a remarkable performance thanks largely to the Federal Reserve. But here we are almost 5 1/2 years later and the question is, can we keep going higher? Always remember, nothing goes straight up or straight down.

We have many stocks that are in a corrective mode and some that are in a downright bearish mode (see last Friday's post). If one simply looks at the indices themselves we can see that they are still in a long-term uptrend. And we can also see that many of these same indices are beginning to show negative divergences. That means prices are going higher, but are not being followed by momentum. This can be an early warning sign that a correction is coming.

Today we are witnessing a sea of red as many stocks are coming under pressure as profit taking is coming into the market. Now investors sometimes act irrationally when they see pressure coming into a broad spectrum of stocks and want to sell just to get out of a position regardless of how good a company may be. This shakeout happens more often than the NYSE, the S&P 500 and the NASDAQ would have you believe.

In today's video, I will be looking at several markets and sharing with you what I believe is going on based on the Trade Triangles and other technical tools that I will be using to illustrate negative divergences.