The 16th of December will be remembered by investors across the globe, and Russia specifically, as “Black Tuesday;” a day when investors got a quick and unwelcome reminder of the 1998 crisis during which Russia was bankrupted. On Black Tuesday, the Ruble tumbled by 21.1% in less than a day and hit 78.51; Credit Default Swaps (CDS) for 5 years have priced in a 8.8% chance for a Russian bankruptcy. Black Tuesday was, simply put, an utter meltdown; investors were in a panic, Russians were running to the banks and the risk of a total collapse of the Russian economy hung in the air. Yet two weeks later, as some of the chaos from that Black Tuesday began to dissipate, some stability has emerged and with it the Ruble has regained some lost ground. The two questions which beg to be asked and answered; Is it the calm before the storm or perhaps a step toward stability? As we attempt to answer these questions we will also, hopefully, shed some light on the Ruble’s possible trajectory as a consequence.

What Ignited the Chaos?

Although it is still debatable as to what exactly was the last straw, there are clearly two very big contenders. The first was Rosneft, the Russian oil giant, was effectively bailed out by the Russian State through the tapping of the country’s emergency reserves.

Then there was the morning of December 16th after the Russian central bank surreptitiously, abruptly and unexpectedly hiked the benchmark rate from 10.5% to 17% in the overnight hours. Shortly after the rate hike, investors began a big Russian exodus; as a result, all bets were off and the Ruble quickly lost altitude. Why have these two events resulted in hysteria? It’s not perhaps what they are prima facie, but rather what they mean. Consider that Russia’s corporates have foreign debt liabilities of $600 billion and Russia’s emergency fund only amounts to $418.88 billion (including its Gold reserves) and of that emergency account a portion of those funds are earmarked for pension payments. Thus the idea of the State taking on Russia’s corporate debt at this particular time seems like a highly risky move which will undermine the finances of the Russian government, especially in light of the fact that Russia’s corporate debt is more than the government’s emergency funds. Furthermore, if you take into account the collapse in Oil prices then it’s hard to imagine what other investment could pump up those reserves. As to the other event, the rate hike to 17% was perceived as one step ahead of capital controls and that is what compelled investors and Russian oligarchs to move their holdings abroad in a massive capital flight.

So what has happened since that day? The Ruble has stabilized for now at 55.43 and that is thanks to two major policy “acts,” though neither of which are in line with free market norms. Firstly, the Russian government has literally forced all Russian exporters (namely, its oil and gas giants) to convert all their Dollar income and holdings into the Ruble, thus encouraging Ruble demand. The second “act” (which sounds more like a threat than anything else), is for the Russian central bank to place representatives on the trading floors of the big banks to monitor and determine who exactly are the big sellers of the Ruble during trade (at least as was reported by the press). This might be, according to the Financial Times, a “gentle” threat to Ruble sellers that it is no longer legitimate to sell Rubles in the billions. Although those two unconventional acts are not official and the Russian government continues to deny that it will impose capital controls, let there be no doubt, both of these acts amount to de facto capital controls. 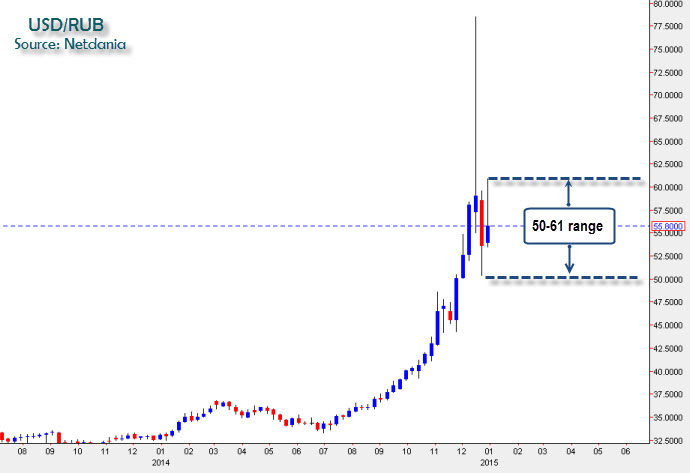 Is the Worst Over?

Indeed, the Ruble has stabilized in the aftermath of those two measures and after the Russian central bank publicly announced it would help Russia’s corporates to service their debts. The other two measures or capital controls de facto ensure that the selling pressure on the Ruble from within Russia will be limited. With capital controls de facto in place in Russia and with short term debt covered it seems that, for the very short term, the worst for the Ruble is over. However, with risks still high the Ruble, rather than being bullish, moves to a range bound of between 50 and 61. Can this range last? In the near term, it will largely depend on Oil prices; another plunge and this time the storm may not end so quickly. And as for the long term? With still roughly $120 billion in corporate debt needing to be covered next year it is reasonable to believe that a wave of defaults could be ignited over the next few years and that this eventuality will constantly loom over the Ruble. Moreover, the temporary halt in Oil’s collapse may soon resume. And, finally, if we were to follow one big index that embodies all that is wrong with Russia it could be Russia’s 5 year Credit Default Swaps. As seen in the chart below, it is above the 5% threshold which is more or less Russia’s “normal” level (under sanctions), it is only when CDS’ return to 5% that one can fully claim that the Russian crisis is constrained alongside the Ruble. Until then, hold tight; this might be the calm before the storm. 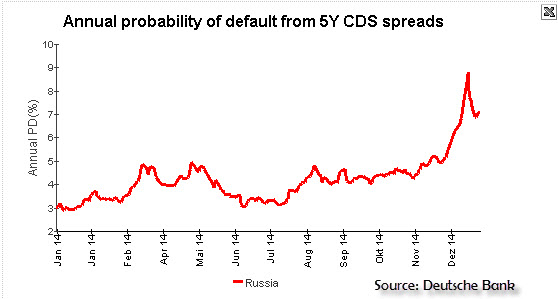 One thought on “Is The Ruble Meltdown Over?”