The global economy is sending mixed signals to investors right now. The data we've seen so far this year hasn't really let us know what direction the economy is headed – oil is still lingering at less than $50 per barrel while the U.S dollar continues to reign supreme relative to foreign currencies.

In the auto industry though, there doesn't seem to be any doubt about its direction.

After coming out of the financial crisis with less than 10 million new auto sales in the U.S., March's latest data puts total annual sales at 17.05 million for 2015 – up from 16.16 million in February and higher than the 16.9 million analysts predicted. The IHS estimates that total sales for the North American market will grow by 2.5% to 20 million units.

Sales in overseas markets are similarly expected to perform well with China growing 7% to 25.2 million units and Europe up 3% on improving fundamentals. Lower oil prices around the globe are expected to contribute to higher auto growth reaching 88.6 million light unit vehicle sales for 2015.

Cheaper materials is also helping contribute to the rise in auto sales. Automotive raw material prices dropped 4% month-over-month and 8% year-over-year for February with steel and iron seeing the largest decrease. Average gas price for February was $2.35, well under last year's average of $3.44, with the EIA predicting a $2.47 average for 2015 and a $2.81 average for 2016. Easy lending standards have also been helping to drive consumer demand.

This top U.S. auto giant is go for profits

March was a bumpy month for Ford with a 3.4% decline in sales, but still better than the expected 5.4% decline analysts predicted. Unseasonably cold weather was blamed for the pullback but a lot of positives still lay ahead for the $63 billion auto manufacturer.

Ford's Mustang brand has seen impressive growth so far this year. Sales are up 61% year-over-year outselling the 2nd most popular sports car, the Chevrolet Camero, by more than 72%. The sports car segment of auto sales has been in high demand with growth of 21% in the last year and Ford is well positioned to continue outperforming its peers.

The company's F-150 model has been plagued with inventory issues, but has still managed to help Ford's truck sales increase 3.8%. production of the newest model is underway with full production expected to take place sometime in the 2nd quarter.

From a stock performance aspect, Ford is off to a positive start. 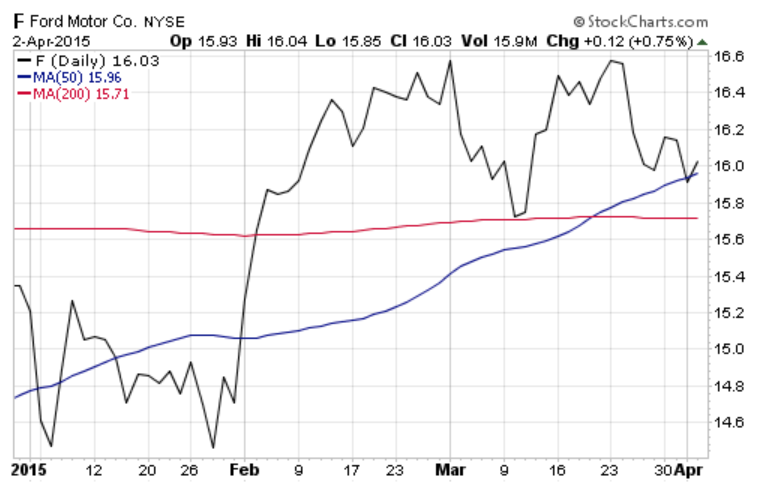 What's interesting to note is that despite Ford's upward climb this year, the 50-day moving average only recently crossed over the 200-day – a bullish signal that the stock is set to go even higher.

Fundamentally, the stock trades at less than 14 times earnings with a long-term EPS growth rate of about 17% giving it a PEG ratio under 1 – a sign that the stock might be undervalued. It also provides plenty of downside protection with its 3.8% dividend yield.

Most impressively though, is Ford's free cash flow – in the last year, free cash flow from operating activities grew 39%. For 2015 the company is on track to earn more than $10 billion in free cash flow which gives it a wide economic moat and plenty of strength for stock buybacks and positive acquisitions.

Full-year earnings for 2015 are estimated to be around $1.60 per share which gives it a rough value of $22.40 with a P/E of 14. That represents a potential 40% gain from its current stock price. Ford has plenty of upside in its future and should outperform peers like GM for 2015.