I wrote a few weeks ago about investing in Master Limited Partnerships (MLPs) and pipeline companies, and some of the nuances involved. Starting with the fact that there ARE some major differences between MLP funds and pipeline funds, so investors need to know what they're getting.

As I stated in that article, I believe the US oil & gas boom means pipelines and energy infrastructure are going to remain in high demand for the foreseeable future – despite Hillary Clinton's Tuesday announcement of her opposition to Keystone XL. Plus, I generally regard pipelines as being a historically defensive area of the stock market, comprised of relatively steady, fee-for-service businesses. Hence, today I present a continuing analysis of a couple ways to play the midstream energy industry – whose stocks may be receiving undue punishment in the midst of the oil crash of the past 15 months.

To be clear, the midstream industry's haircut to date, while noteworthy, has not nearly so bad as the carnage in oil or the rest of the energy sector. As the graph below shows, pipeline stock prices are down about 16% since June 20, 2014, compared to nearly a 38% decline for the overall energy sector, and a 63% crash in oil prices. 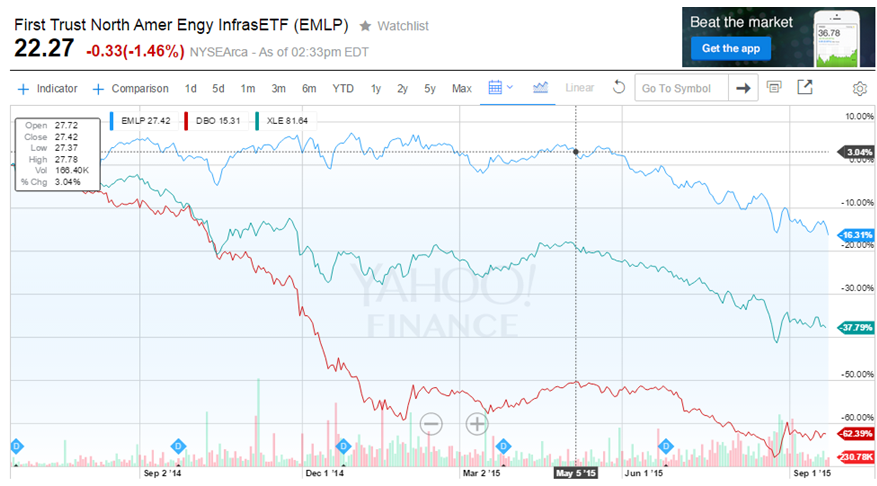 Actually, ALL the of pipeline stocks' decline in the last 15 months has come since roughly May 5th this year (shown on the graph above with a dotted vertical line), which is the date oil prices bumped up against its most recent top and began melting down again. Pipeline stock prices had been flat throughout oil's collapse for the prior 10+ months; but since that May 5th peak, pipelines (as measured by EMLP) are down 18.75%, the broad energy sector (XLE) is down 23%, and oil is down 24%. See graph below. 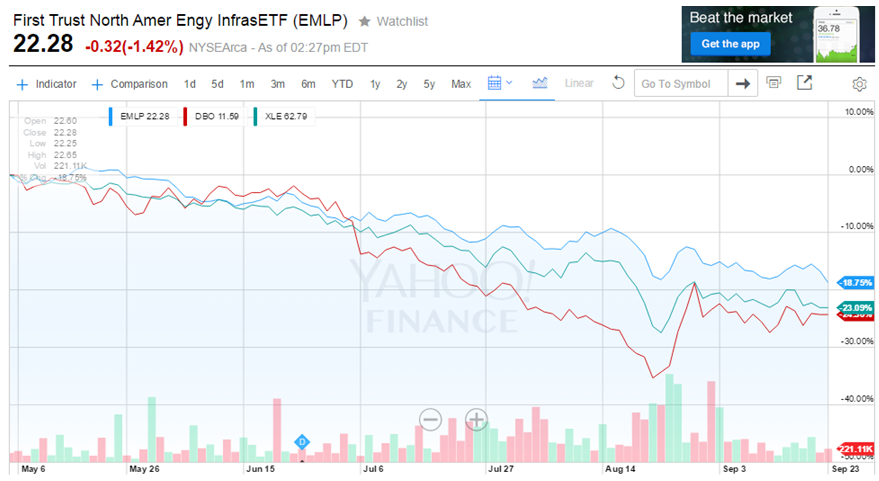 EMLP, as I've been implying, is a fund that invests in "energy infrastructure" (meaning pipelines, transportation, storage, and power generation). The fund lies squarely in energy's "midstream" category; yet among "midstream energy" funds, EMLP is somewhat unique in that only 20-25% of the fund is invested in companies that happen to be structured as MLPs. As I wrote in my article a few weeks ago, many "MLP" funds (like Alerian, for example) have structured their funds as C-corporations – thereby subjecting their returns to C-corp taxation at the fund level. Case-in-point: the Alerian MLP ETF (AMLP) severely underperforms the very Alerian MLP index it purports to track… precisely because AMLP (the Fund) is taxed at the fund level.

Another issue with "MLP funds" like Alerian's and Yorkville's is that not all MLPs are in the oil & gas pipeline or transportation business at all. Some MLPs are in the coal and/or oil exploration & production industries. And finally, "MLP funds" overlook many true midstream businesses that don't happen to be structured as MLPs.

First Trust's EMLP, on the other hand, is structured as a Registered Investment Company (RIC), rather than as a C-corp. The RIC structure allows the funds to avoid taxation at the Fund level.

In order to qualify as a RIC, EMLP must have no more than 25% of its assets invested in MLPs. According to Tortoise Funds (who also manages a midstream RIC fund, discussed later), of the 103 total pipeline companies in North America, 66 are MLPs, 15 are MLP affiliates, and 22 are pipeline corporations. Tortoise further reports that (again, to show that not all MLPs are pipeline companies), the MLP universe includes 147 MLPs; 127 of which are energy-focused and only 67 are pipeline MLPs.

Tortoise is a niche firm started in 2002 by five founding members who all remain with the firm today. The firm's investing approach is guided by its Aesop-esque motto, "Steady wins."

The Tortoise North American Pipeline Fund (NYSE Arca:TPYP), which launched on 6/30/2015, announced its first quarterly distribution on Wednesday. From the press release:

Based on Tuesday's closing price of $21.39, that would imply about a 4.17% distribution yield. TPYP sports a 0.70% expense ratio. Although the ETF is less than three months old, it's built to track the Tortoise North American Pipeline Index (TNAP), which has a longer history. The 3-year annualized total returns for the TNAP index have been about 4.7% before expenses, based on my calculation from TNAP index data on Tortoise's website, accessed on 9/24/15. Note: for the three years ended May 5, 2015 (before pipelines entered their recent, uncharacteristic 20% slide) the TNAP index returned about 14.7% annualized. So the last few months have shaved the equivalent of 10% per annum from TNAP's performance.

EMLP has a comparable distribution yield of about 3.75%, and annual expenses of 0.95%, and 3-year total returns through 9/24/15 of about 4.9% net of expenses, per Morningstar. As with TPYP, EMLP's 3-year returns through May 5th were in the mid-double-digit range.

EMLP is "actively managed," with only about 7% annual turnover per Morningstar. First Trust offers a growing number of innovative ETFs, and the firm's Chief Economist, Brian Wesbury, is one of my top 2 or 3 favorite experts on market fundamentals and the economy. I've followed Wesbury's content on a weekly basis, if not even more frequently than that, for many years.

The two funds are obviously quite similar. Let's take a quick peek under the hood to see how each fund is actually invested. EMLP is an actively managed group of 65 holdings, including electric power utilities (which TPYP avoids). TPYP holds all 100+ stocks in the Tortoise North American Pipeline index. TPYP's holdings are weighted based on a modified float-adjusted, market capitalization weighting, with MLPs capped at 20%, and with no single issuer greater than 7.5% as of the rebalance date.

Holdings, listed by structure type (as of 6/30/2015, data taken from company publications; category definitions may vary):

Holdings, listed by industry (as of 6/30/2015, data taken from company publications; category definitions may vary):

Here's a complete list of holdings EMLP and TPYP.

Energy infrastructure is here to stay

"The performance of companies in the energy infrastructure sector is not highly correlated with the price of oil and other types of energy, but rather with demand for their services."

Pipelines and other infrastructure assets are still catching up with the huge supply boom in North America.

The same EMLP investor guide quotes a March 2014 report from the Interstate Natural Gas Association of America (INGAA), which states, "The United States and Canada will require annual average midstream natural gas, crude oil and natural gas liquids midstream infrastructure investment of nearly $30 million per year, or $641 billion (2012 $) total over the 22-year period from 2014 to 2035."

Notice, the "midstream" infrastructure pipeline industry tends to think in terms of long periods, like 20+ years. Even today, North American production – as well as demand – continues to grow… regardless of today's much lower prices for oil and gas. The need for pipelines and other infrastructure isn't going away.

Action plan if you own MLPs or pipelines with unrealized losses

One more tax consideration: If you already own some MLP or pipeline investments, you might consider swapping your current holdings – which may have unrealized capital losses, depending on how long you've held them – into either EMLP or TPYP. Tortoise posted a marketing sheet to their website in August, specifically to describe this tactic. Said the folks at Tortoise (in part), this idea is "for investors looking to harvest tax losses, capitalize on this pullback, (and)… Also… maintain exposure to pipelines (with a) quality… investing vehicle."

"While a downturn can provide the opportunity for tax losses, it can also present a buying opportunity. The current market environment could be a great opportunity to not only maintain, but potentially enhance the effectiveness of the exposure to the space. It is important to understand that not all MLP and pipeline ETFs are created equal, and that structure matters. For a current investor of MLP ETFs, switching to a pipeline ETF structured as a regulated investment company (RIC), could offer (many) benefits."

Tortoise's fact sheet goes on to enumerate a half-dozen or so purported "benefits" of their fund, most of which I've covered herein.

A "tax-swap strategy" such as this could allow you to realize a loss for tax purposes without giving up exposure to the energy infrastructure theme. I can't give personalized tax advice, obviously, but you might run this by your tax advisor and/or investment advisor if interested.

Disclosure: At the time of post publication this contributor did not own any other stock mentioned. This article is the opinion of the contributor themselves. The above is a matter of opinion provided for general information purposes only and is not intended as investment advice. This contributor is not receiving compensation (other than from INO.com) for their opinion.