Perception, in my mind, is one of the most powerful forces in the market. Perception can help drive the market up or down and currently that direction is down.

Disillusionment happens when investors become so stressed out that they become disenchanted with the market, remember 2008? That is what I think is beginning to take place right now in the markets. 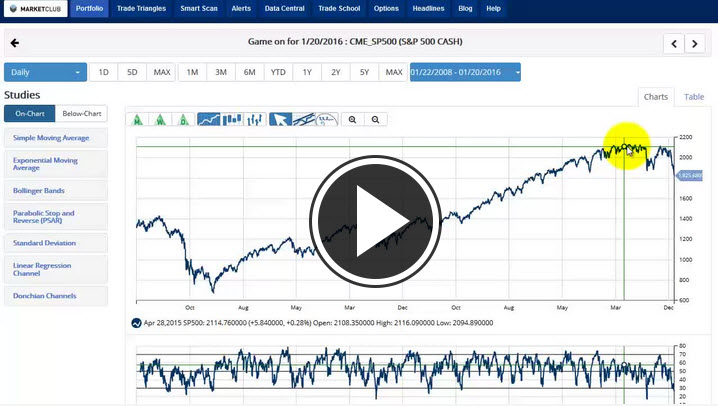 Let me give you an example with a well-known stock. Just two weeks ago Amazon was flirting with the $700 level and investors were falling over themselves to get into the stock that they thought was going to go much higher (perception). Now here we are 14 days later and Amazon has dropped over 20%. Did Amazon's business change dramatically overnight, are the prospects suddenly bad now for Amazon? The answer is no, what did change was perception. Almost overnight everybody who wanted to get into this stock became stressed and disillusioned and then wanted out.

Another example would be crude oil. A few years ago it was trading over $140 a barrel. This morning crude broke below $28 a barrel which is a target zone I mentioned over six weeks ago when crude was trading over $40 a barrel. Now the perception and disillusionment for crude is so high that many analysts think crude can go to $20 a barrel. I'm not so sure of that, what I am sure of is that the Trade Triangles will certainly keep you on the right track. Last year crude was a huge winner thanks to the Trade Triangle technology.

I looked back at my first post of the year and many of the trends I talked about then are continuing to play out now. The Trade Triangles issued warning signals way back in mid-November that the Dow was in trouble and you should be out of the market. Did the Trade Triangles know that the market was going to break and drop so quickly? No, rather the Trade Triangles alert you to changes in trend – how far those trends go depends on the markets themselves.

Today I will be looking at several major markets and illustrating how to effectively use the Fibonacci tool.

Leonardo Fibonacci was a mathematician born in 12th Century Italy. His study of Fibonacci numbers (a sequence of numbers where each number is the sum of the two previous numbers) is often applied by modern technical analysts to find support and resistance in stock charts.

The principle behind a Fibonacci retracement is that after a stock moves upward or downward, the price will often retrace or correct some of this movement. Many technical analysts believe that the amount of retracement will often correspond to one of the Fibonacci levels. The five horizontal lines represent percentages of 100%, 62%, 50%, 38% and 0% (with 62 and 38 being Fibonacci numbers).

2 thoughts on “When Perception Meets Disillusionment”