There's no doubt that the dramatic 800 point rally we have seen the past three days is practically unprecedented, but did it change the major trend of the market?

The simple answer is no, the longer-term trend for the equity markets at the moment remains negative. But please don't misunderstand what I'm saying, I was as surprised as anybody at the velocity of the rally which exceeded the Fibonacci retracement levels I discussed recently. 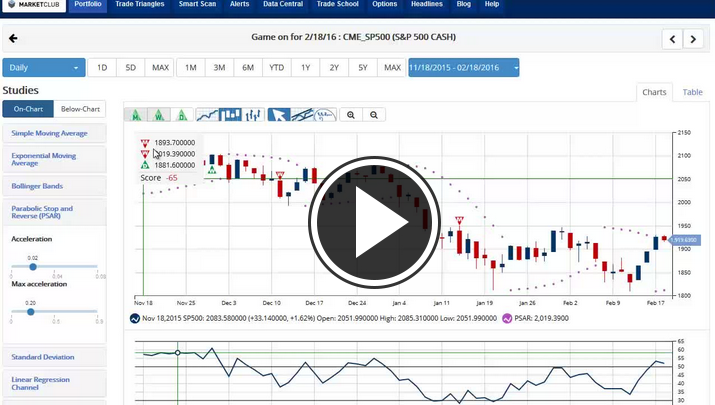 Today should be an interesting day to say the least, and I doubt seriously that the market can close higher and would expect to see some sort of pullback from the current levels. There is also what I would consider to be a major resistance based on the highs that were hit on Feb. 1st at the 1939 level on the S&P 500. Providing that level holds, we are still basically in a downward trending market, albeit a choppy one.

The pullback in gold (FOREX:XAUUSDO) appears to be consolidating, which is good given its rapid move to the upside. In an ideal world, I would like to see gold continue to consolidate around the $1200 level before once again moving higher. I still believe that gold has broken the back of its four-year bear trend and has now embarked on a long-term bullish trend that could take it to the year 2020. Be sure to watch the Trade Triangles for signals that gold has once again embarked on an upward move.

It appears as though the correlation between equities and crude oil (NYMEX:CL.J16.E) is beginning to collapse as oil is perhaps starting to find some level of support around the $30 area. The one standout feature I see is the glaring bullish divergence on the RSI indicator. Based on the Trade Triangle indicators, I prefer the sidelines at the moment, but want to keep a close eye on crude oil.

Today I'm analyzing the EURUSD (FOREX:EURUSD). For the past 12 months, this market has been in a border trading range between 1.05 on the downside and 1.15 on the upside. At the moment it's in the middle of this range around the 1.10 area. Technically speaking both the monthly and weekly Trade Triangles are indicating an upward trend. However, the daily Trade Triangle that you use for timing is red, indicating you should be on the sidelines. Two things I want to point out are, the RSI has pulled back to support at 50 and you want to watch the daily Trade Triangle and wait for it to turn green indicating a buy. Look for this market to move back up to the upper levels of its trading range to the 1.15 level.

As I mentioned earlier in the month, be nimble and don't get carried away and fall in love with positions. The sharp rally in equities caught many traders by surprise and there was a great deal of short covering coming into the market. It remains to be seen whether the short-term trend will continue or whether we are moving into a choppy trading range environment.

Thank you for all of your comments and questions, I really do enjoy hearing from you.

2 thoughts on “Bull Market Or Bear Market, Which Is It?”