There's a popular myth on Wall Street about short sellers being the smartest guys in the room. After all, stocks, in general, do tend to appreciate over time, but picking stocks that fall requires a bit more homework and skill. But short activity in a stock isn't always a good thing.

When enough short sellers team up on a stock and it happens to post better than expected results, they either bail out at the first opportunity or run the risk of getting caught in a short squeeze. If the stock appreciates too much too fast, they'll get called out of their positions creating an event that turns into massive buying on an already hot stock that can cause a quick spike in value.

For one stock, a slew of bad news seemed like the ideal playground for initiating a short position. A downward trending price and the sudden departure of the CEO is normally a red flag for any company. Add in a volatile stock market on the verge of a major bearish move and you have everything short sellers look for.

Imagine Wall Street's surprise when the same company posted an upside surprise in earnings. Not only that, but the quarter was so positive that it even elicited a rating boost away from "sell." While gambling on a short squeeze is never a wise reason to own a stock, there are a lot of positive developments that could make this once hated company a burgeoning success story.

A Company In Crisis No Longer

F5 Networks Inc. (NASDAQ:FFIV) is a $6.5 billion software services and security company that's been in a bit of a rough patch for the last several months. Its stock is down over 27% in the last six months while the CEO resigned unexpectedly amidst a personal conduct scandal less than six months after he took over the position.

Despite the bad news, the company has actually been performing quite well. It beat 1st quarter earnings at $1.73 per share – higher than the $1.60 predicted by analysts. Cash flow from operations hit a record $204 million for the quarter as well.

A quick look at F5 Networks' chart doesn't reveal much of a trend in either direction. 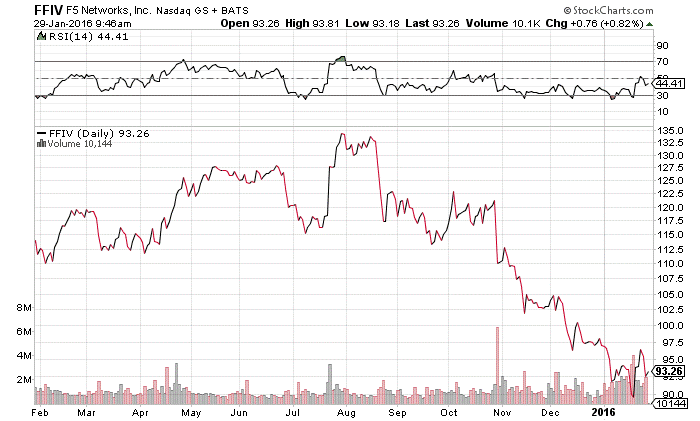 The current short interest on the stock is fairly high at 8.97%, but the recent earnings beat could change that fact rather quickly. From the previous quarter to the latest, bearish investors increased their short positions by 6.4% suggesting that the downward move expected didn't pan out as anticipated.

The stock looks cheap as evidenced by its relatively low P/E ratio of just 13 compared to its industry average of around 20. The company also carries no long-term debt obligations making it agile during economic hardship – a prized commodity in the current marketplace. The stock was also recently upgraded by Citigroup from a "sell" rating to a "neutral" one suggesting that overall sentiment on the stock is shifting.

Based on its full-year earnings and growth estimates, this stock should be fairly valued at $110 per share – a potential gain of 18%