Hello MarketClub members everywhere. It's Friday and a lot is going on in the markets. I believe that the sharp rally in the indices will fizzle out in the next five days and they will move into a trading range before heading lower. 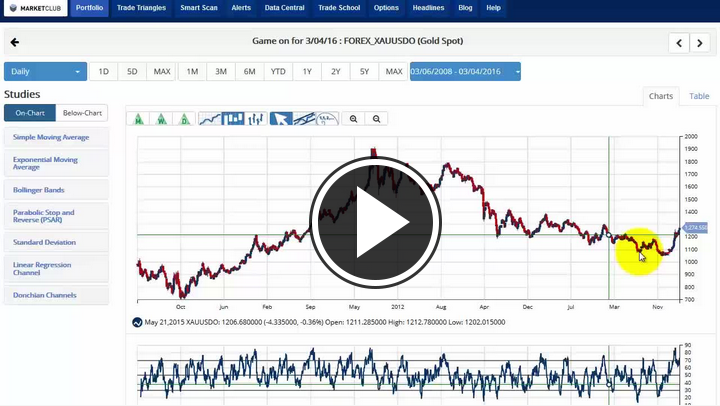 The reason I say that is because all three major indices are in what I call "thin air". What that means is that they are all above their 50% Fibonacci retracement levels and close to their 61.8% major resistance areas.

The Fibonacci retracement levels were measured from both a close-only and a high low measurement and have been averaged out. All of the indices may go higher. However, the indices are in areas where they will begin to have problems before returning to the general downtrend that I see coming.

Based on the Trade Triangle technology, crude oil (NYMEX:CL.J16.E) is now in an uptrend and has put in a bottom. It would appear as though there is potential for a double bottom which will be confirmed with a move and close over the $36.00 level. When that happens, I would expect crude to move to the $38-$40 level where it will run into a long-term downtrend line that should halt its upward momentum. Watch oil very closely today for a close over the $36.00 level.

The gold (FOREX:XAUUSDO) market broke out of the Triangle continuation pattern I showed in my last video. Look for gold to have resistance at the $1300 level from January 22, 2015. The bigger picture also portends to this market moving still higher with Fibonacci retracement patterns indicating the potential of seeing a 50% retracement of around $1482 an ounce. A 61.8% Fibonacci retracement would take spot gold up to $1582 an ounce.

Like the indices, the Fibonacci retracement levels for gold have been measured from both a close-only and a high low measurement and have been averaged out.

Watch gold closely today as it could be a great 52-week high on a Friday trade. Here are the only 3 rules you need to trade "52-week New Highs on a Friday".

RULE #1: When gold hits a new 52-week high on a Friday and closes at or close to its high for the day, go home long gold for the weekend.

RULE #2: Exit this your long gold position on the opening the following Tuesday.