Well, here we are, the 1st of April and I don't have an April fools joke to share with you. Q1 will go down in history as one of the best first quarters since the 1930s. So what propelled this market to push so much on the upside in Q1? To be honest with you I'm not sure; maybe it was the prospect of ongoing cheap money from the FED or something else. When you look at hedge fund managers and other professional traders, nobody was expecting such a strong quarter. Now that Q1 is in the record books it is time to start looking at what is ahead for this the stock market. 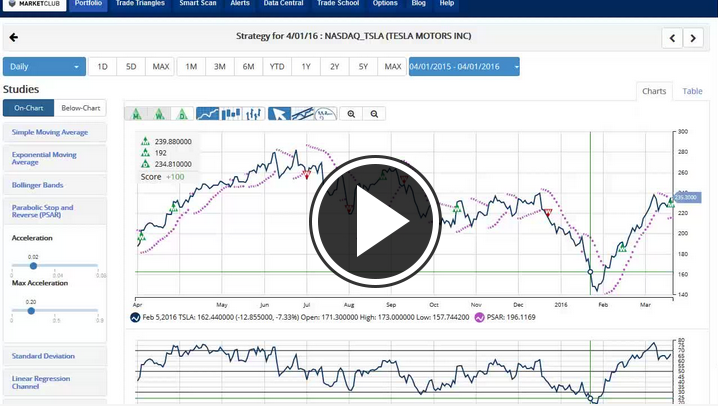 In today's video, I will be analyzing crude oil (NYMEX:CL.K16.E), which triggered a sell signal and Tesla Motors Inc. (NASDAQ:TSLA) which triggered a buy signal today. I will also be covering the usual suspects.

I expect to see the indices to trade more like a two-way street and not move straight up in Q2. At the end of every week I look at the weekly charts to see where the indices are compared to the close last week, has the market gained or lost ground or moved over key levels. The DOW has been down over 100 points today and is now pretty much flat. How it closes for the day is pretty much anyone's guess at this point.

There is a battle royal going on between the Bulls and the Bears right now. Who wins, is yet to be decided. Key levels to watch in April for the indices are as follows:

If those levels are breached, it will trigger green monthly Trade Triangles, indicating a positive upward trend.

Crude oil triggered a sell signal yesterday and we are seeing further downside action today. On March 23 the daily Trade Triangles gave a signal to exit any long positions at $40.41. This proved to be a timely exit as the market is currently trading at $36.86. Yesterday's sell signal in came in at $37.71 which is a number I have highlighted in previous videos. I would not be surprised to see the May contract trade down to $35.50 in the future.

Yesterday, the amazing Elon Musk who is the head of Tesla unveiled to much fanfare their model 3 car that he proposes to sell for $35,000. This would put Tesla in a more affordable range for most car buyers. The response was outstanding with 150,000 people plunking down $1,000 for the rights to buy a Tesla Model 3 car. Today, Tesla triggered a green monthly Trade Triangle at $239.88 indicating that the major trend is now positive for this stock. My upside target for Tesla is $280.